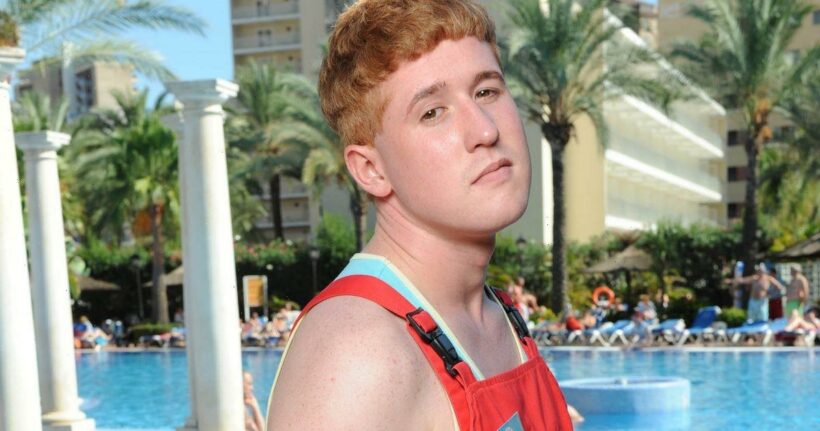 Benidorm star Adam Gillen looks a far cry from his character Liam Conroy in some newly-shared reunion snap with his former co-star.

The Mancunian actor played hapless hotel employee Liam Conroy on the show between 2011 and 2018, and he looks totally different ten years on from joining the ITV sitcom.

Adam posed for a reunion selfie with former co-star Tony Maudsley recently as they celebrated the ten-year milestone.

The 36-year-old played star the character from 2011 until the show was cancelled back in 2018.

His character was introduced as the son of Les Conroy – acted by Tim Healy, 69 – and later became an employee at the Solana hotel himself in later seasons.

And just four years after the series ended, the TV actor now looks drastically different to what he did in the comedy series.

Liam Conroy was initially clean-shaven, but now Adam can be seen with a fully-grown big beard in the Twitter snap.

The social media snap showed the actor – who has also starred in Fresh Meat – wearing a Santa hat and styling a beard, as he stood next to his former Benidorm co-star Tony Maudsley, 53.

The friends frequently acted in Benidorm, scenes together during their time on the programme, with Liam working with Tony's character – Kenneth Du Beke – at his beauty salon at one point.

Tony shared the photo and captioned it: "Christmas is always better when your favourite people come to visit."

He then further added: "When @adam_gillen pops round it's like slipping into a cozy pair of slippers."

Liam was introduced as a holidaymaker in the fourth season and later had jobs at the all-inclusive resort including a role as a maintenance worker.

However, he decided to leave the Solana in the final episode of the show and went on to embark on a new career with hairdresser Kenneth.

Tony isn't the only former co-star that Adam stayed in touch with as had a relationship with Laila Zaidi, who played Cyd, for a couple of years.

The former couple were said to have met on the set of the final series of the show when Laila first joined the cast.