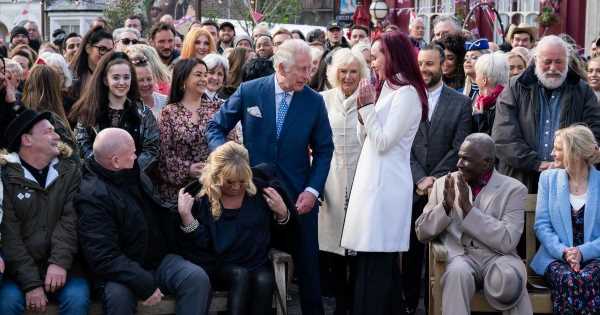 Prince Charles and Camilla are set to appear in British TV classic EastEnders in a special cameo appearance.

The royal duo visited the set in March and spent time with cast members including Danny Dyer, Rose Ayling-Ellis and Natalie Cassidy, but it was only recently revealed they also took the time to shoot some special scenes.

Danny said: "Very random to see the royals, you know, up close they were very charming, really chatty, they’ve got mad faces when you’re close."

The special cameo was part of the jubilee celebrations and the episode will be broadcast on June 2.

Charles and Camilla join a long list of celebrity cameos in the soap from down the years, which has included major pop stars and even politicians.

Which were the best celebrity cameos in EastEnders?

Celebrity cameos in EastEnders have included the likes of Take That star and solo sensation Robbie Williams, Spice Girl Emma Bunton and business guru Lord Alan Sugar. Even Boris Johnson has stepped onto the soap screen.

Robbie's appearance in the show was only brief, but he is said to be a big fan of the soap.

The Angels and Let Me Entertain You singer was seen using the phone in the background in 1995, so only eagle-eyed viewers were able to spot the star.

Emma Bunton made a brief appearance on EastEnders before she was catapulted to fame as a Spice Girl.

Baby Spice, a veteran of the famous Sylvia Young Drama School, appeared as a mugger and was seen grappling with Patrick Trueman as she and another girl demanded he give his wallet over.

Life could have been very different for Emma had she been successful in the audition for the classic character Bianca, who was first introduced in 1993.

Emma got down to the final four in the audition stages, before she was beaten to the role by Patsy Palmer.

She said: "When I was 17 I was up for the part [of Bianca]. I loved the show and thought it was perfect for me.

"I got right down to the final auditions and then was rejected. It was really upsetting."

Cutthroat businessman Lord Alan Sugar appeared in a special EastEnders skit for Children in Need in 2012.

The Apprentice boss was on the lookout for a new recruit but was unimpressed by Masood Ahmed, Ian Beale and Alfie Moon.

When pub landlord Mick Carter, played by Danny Dyer, announced royalty would soon be visiting the pub, on-screen wife Linda couldn't help but be thrilled at the imminent arrival of 'Harry'.

It was former West Ham, Tottenham and Portsmouth manager Harry Redknapp that turned up instead.

Prime Minister Boris Johnson charmed none other than the tough Peggy Mitchell on EastEnders.

Peggy, played by Dame Barbara Windsor, was running for local election at the time and threatened to give then-mayor Boris an earful if they ever crossed paths.

Johnson then walked in a moment later, but Peggy merely turned sheepish and referred to him as 'Mr Mayor'.

Mr Mayor said: "If you have any ideas for how I could help Walford, here's my card."