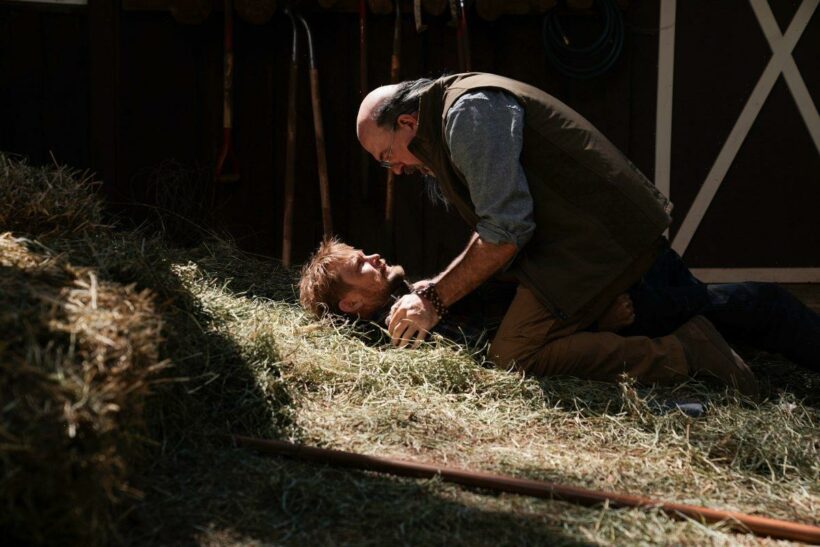 ABC’s Big Sky Season 2 introduced a new character with a familiar face — Wolfgang Legarski. John Carroll Lynch plays Wolf, and in season 1, the actor portrayed Wolf’s State Trooper brother, Rick Legarski. With each new episode, the writers give viewers another intriguing tidbit about Wolf and how he differs from Big Rick. In Big Sky Season 2 Episode 3, the producers share a book that Wolf wrote; however, it’s hard to read the entire cover in the brief moment it’s on the screen. Luckily, every detail of Wolf’s book in Big Sky is below.

[Spoiler alert: This article contains spoilers from Big Sky Season 2 Episode 3 ‘You Have to Play Along.’]

Viewers should recall that Wolf Legarski’s current mission in life is to reverse the evil that his brother, Rick, unleashed into the world in Big Sky Season 1. With the help of his wife, Agatha (portrayed by Romy Rosemont from A Million Little Things), the couple tries to change serial killer Ronald Pergman (Brian Geraghty). Wolf tries to teach him manners and the law of nature.

In Big Sky Season 2 Episode 3, Wolfgang insists to Agatha that Ronald Pergman has shown no improvement or growth since coming to the ranch. He’s frustrated and feels it’s time to stop trying. His wife insists that Wolfgang try to befriend the serial killer instead. They also discuss trying new angles before “putting an animal down.”

What is on the back of Wolf Legarski’s book in ‘Big Sky’?

“A masterpiece of psychological warfare between you and everyone else on the planet, human or beast,” the quote on the back of the book reads. “Should be required reading for any serious animal enthusiast or strategy buff. It gets your mind where it needs to be,” John Navarro, author of Toxic Femininity, wrote.

In addition to that snippet from an anti-feminist, Big Sky viewers get another glimpse into Wolf’s past from the cover.

“Born in the backwoods of Montana, Wolf Legarski spent most of his youth traveling from town to town for Grateful Dead concerts or Sasquatch festivals,” Wolf’s book cover reads. “His regard for Bigfoot only enhanced his love of the wilderness and increased his respect for all manner of animals, except man. He found the weakness in civilization and decided to man up mankind… even if it killed them.”

The cover suggests that Wolf might go to any lengths in his attempt to reform Ronald Pergman.

Later in the Big Sky episode, Agatha and Wolf bring Ronald and Scarlet together for a family dinner. The women serve a colorful dinner grown from their garden. However, Ronald insists he would rather eat cereal over beets from the garden because it’s his comfort food. Throughout the episode, he mentions his mother numerous times, and viewers begin to see the similarities between Ronald and real-life serial killer Ed Gein.

Scarlet tries to tell Ronald they are in the safest place possible. However, he insists on attempting to escape. She begs him to let Wolf and Agatha help the couple, but Ronald refuses. He won’t play along even if it keeps them out of harms’ way.

According to IMDb, Big Sky Season 2 airs on Thursdays at 10 p.m. EST on ABC.