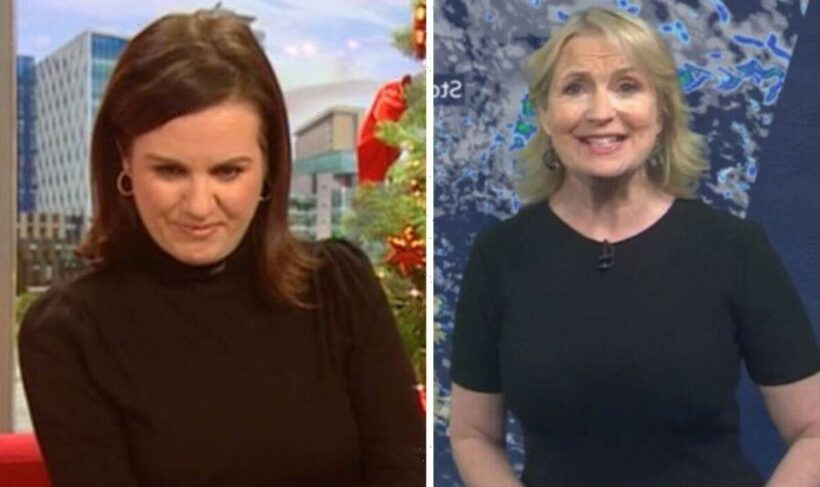 EastEnders: Phil and Keanu confirmed as working together

The meteorologist was back on BBC Breakfast days after Christmas presenting the latest weather forecasts for the nation. As viewers settle into the indulgent week between the big day and New Year, the show’s presenters Nina Warhurst and Charlie Stayt had asked them to get in touch about gifts they’d received which had them less than impressed. When Nina asked Carol Kirkwood to make an admission, she made her feelings about gift complainers clear.

As family members begin to separate after sending the festive period together, it seems some begin to vent about Christmas presents they received they aren’t happy with.

Using this theme to ask people to get in touch, Nina and Charlie had been hearing from displeased fans of the show who openly criticised some of the presents left under their trees.

As Carol wrapped up a weather segment on the show, Nina used the opportunity to get her involved.

“Did you get some good Christmas present this year?” She asked the popular weather reporter.

“Yes,” Carol smiled before Nina went on: “Have you ever had one where you thought, ‘Oh, that’s not quite hit the spot?'”

“Do you know what Nina? Even if I had, I wouldn’t admit it,” Carol replied.

The 60-year-old pointed out: “Somebody’s gone out and spent their hard-earned cash and thought about buying a gift.”

Despite floods of responses from the public who had expressed disappointment in their gifts, Carol went on: “So that would just be mean.”

“Well you’re much better than some of our viewers who have been in touch this morning,” Nina commented as Carol laughed.

The presenter continued: “Later on we’ll be talking about presents that you’ve been gifted that you aren’t so keen on and what your options are.

“Whether to give them back or keep them or exchange them.”

“And how many people are sending you stuff?” Charlie questioned.

“Well, Jane’s got in touch with me on Twitter,” Nina revealed.

She urged others to get in touch, adding:” If you’re not as generous as Carol, who will not name and shame.”

Despite Carol’s judgment, several continued to get in touch on social media to exchange Christmas gift horror stories.

“My now ex-husband gave me a washing up bowl for Christmas. I waited all day thinking he’d say it was a joke and give me my real gift, but no, that was it. To add insult to injury it was a rectangular bowl and I had a round sink, which he fitted #BBCBreakfast,” @janebryant59 recalled.

@SkipMcGowan shared: “I once sold a Makita cordless power drill in the local paper. And then six months later, I received the very same one back as a Christmas present from my brother-in-law, but minus the power pack.”

@IainFreeman1985 added: “My worst but best present was a surprise desk from my Nan when I was 11. My parents had no idea at all it was coming & was quite big.

“She expected my dad to build it Christmas Eve night in our rooms to surprise us. It did last over 25 years so it wasn’t all bad.”