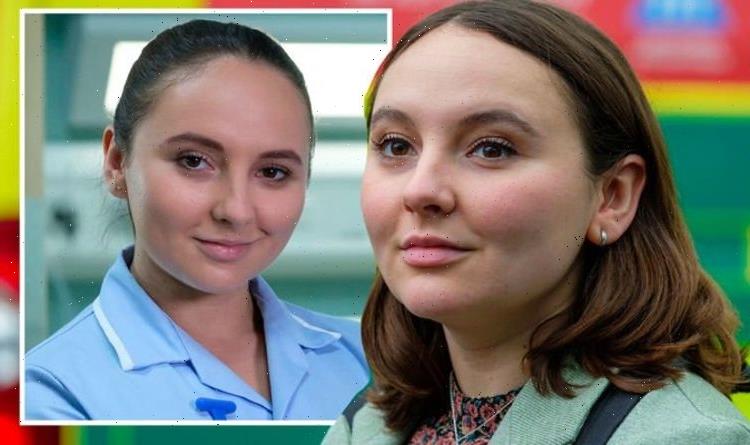 Jade (played by Gabriella Leon) has been a part of the Casualty family since she joined the BBC hospital-based drama in 2018. As well as working through the coronavirus pandemic, the character was featured in a sexual assault storyline and she came face to face with her birth mother having been adopted as a baby. The actress who plays her, Gabriella is moving on to pastures new but there is a specific reason as to why she wanted to leave the serial TV programme.

Why did Gabriella Leon leave Casualty as Jade Lovall?

The character of Jade has grown over the past three years, with the nurse starting off as a rebellious person but she turned into someone more mature.

She captured the hearts of the nation for her personal approach to dealing with patients and wanting to get justice for those who had been wronged.

Discussing her exit from the show, actress Gabriella explained it “felt natural” to bring her alter-ego’s story to an end.

“I am a big believer in going with my gut instinct, and I felt ready and at peace to move on after three years on the show,” she said.

“My final scene I got to work with some of my favourite cast so that was extra special,” Gabriella continued.

“Saying goodbye to the cast and crew was really hard – but we’re good friends and keep in touch. I’m very grateful for my time on the show,” she said in an interview with Digital Spy.

Viewers were also heartbroken to discover Jade was leaving the show, with Annie writing on Twitter: “Wow, @GabriellaLeon_ has been a complete joy to watch in the last few years and it’s a massive loss to @BBCCasualty to see her go.

“What a perfect ending for Jade though. Such a beautiful and emotional episode. #Casualty,” they continued.

Mikey added: “I’m gutted jade has left, she has been amazing to watch over the past year, I am going to miss her so much, good luck in the future, you bought so much to the show and I am proud of you.”

I’m very grateful for my time

How did Jade Lovall leave Casualty?

Jade’s last episode began with the nurse being confronted by her past as her birth mother, Susie (Sophie Stone), turned up in the Emergency Department.

The mother and daughter hadn’t seen each other for a year and their reunion was less than harmonious as Susie was involved in a minibus crash.

Unfortunately, this begins a devastating sequence of events as Jade is aggressive to a patient in front of senior nurse, Charlie Fairhead (Derek Thompson).

Just as she is about to be reprimanded, Dylan Keogh (William Beck), has her locker was being searched, unaware drugs had been planted in there.

Newcomer Stevie Nash (Elinor Lawless) had put them there is she wanted to get revenge on Jade for her involvement in Stevie’s sister’s death.

Jade was immediately pulled into a meeting but Stevie began to feel guilty for putting someone else’s career on the line.

Despite this u-turn, things still didn’t look good for the nurse as Charlie told her an investigation was going to be launched.

Seeking support, the beloved character turned to her mother Susie for support and although she’d given her up at birth, Susie wanted to be a mother her daughter could be proud of.

Agreeing to put their past behind them and start afresh, the mother and daughter began their new journey together as Jade told her colleagues she was leaving the hospital.

At the moment, it’s not been confirmed whether this is a permanent exit for the character or if it is going to be a hiatus.

With Jade leaving with Susie, this means the door has been left open for her to make a comeback one day as bosses decided not to kill her off.

According to reports, the actress did not deny or confirm whether she would be willing to reprise the role in the future.

It will at least be a year or two if Jade was going to return to the fold, given the length of time characters who have left and returned have done in the past.

Casualty is available to watch on BBC iPlayer.