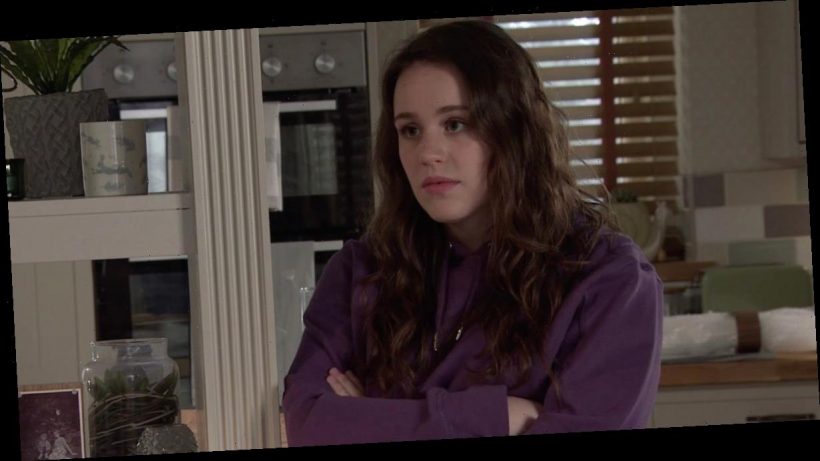 Coronation Street teen Faye Windass' (Ellie Leach) life is set to be turned upside down in upcoming scenes as she thinks she might be pregnant with evil Ray Crosby's (Mark Frost) baby.

Bistro boss Ray manipulated the youngster into sleeping with him recently, and attempted to make another move a few weeks later but was interrupted by her brother Gary Windass (Mikey North)

Faye wanted revenge on her former manager and therefore went to the restaurant to attack him, but assaulted Adam Barlow (Sam Robertson) instead thinking it was Ray.

The troubled youngster ended up confessing to the assault after the finger was started being pointed at Gary.

He was later arrested and things are not looking good for Faye as Gary does his best to try and protect his little sister.

She tells her sister in law that living with the guilt of the attack is making her ill and she’d rather own up to her crime.

Gary calls Maria from prison who tells him how much Faye is struggling.

Later in the week, a police officer calls to question Faye's dad Tim Metcalfe (Joe Duttine) about the rucksack found in Gary’s possession, revealing it contained the weapon used in the attack on Adam.

Tim confides in Sally that Faye hasn’t been herself recently and he’s worried she might have something to do with the weapon concealed in the rucksack.

A concerned Tim quizzes his daughter about the rucksack and wonders if she knows anything about the attack on Adam.

Struggling to keep a lid on her anxiety, Faye denies all knowledge of the assault.

In a state of panic, the youngster announces she’s spending the night at Maria’s, where she drops the bombshell that she might be pregnant with Ray’s baby.

Suspicious, Tim calls at the flat where he spots the pregnancy test and demands answers.

Realising the game is up, Faye plucks up the courage and tells him about how Ray tried to rape her and she attacked Adam thinking he was Ray.

Tim goes in search of Ray and visits Gary in prison and tells him he knows everything and they need to go to the police.

However, Gary insists that for Faye’s sake, they must keep a lid on it. Will Tim agree?

Corrie fans will remember that Faye first fell pregnant at the age of 12 but later gave up her daughter Miley after paling to form a bond with her.

Coronation Street airs Monday, Wednesday and Friday on ITV at 7.30pm and 8.30pm