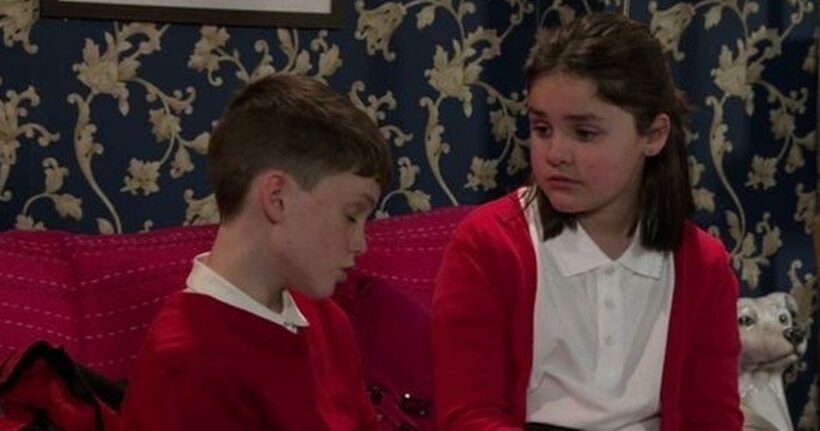 Want all the hottest soap gossip? Share your email to get news, interviews, spoilers and more from the Daily Star

Coronation Street fans were sent into meltdown during Monday night’s episode of the ITV soap, as real-life siblings William and Isabella Flanagan shared an incredibly rare scene together.

The youngsters, who play Joseph Brown and Hope Stape on the cobbles, were spotted together as Hope encouraged Joseph to steal money from her mum Fiz’s purse to fund the school trip.

Previously, they’d both had a good reason to avoid each other as Chesney discouraged Joseph from befriending Hope after she set Alina’s flat on fire.

But now it looks as though they’ll be getting the opportunity to act more together, with Fiz encouraging the duo to be pals outside of school and Joseph set to go missing in the coming days – with Hope following suit.

Taking to Twitter during the episode, fans couldn’t help but comment on the siblings’ scene together, with one praising: "Nice to see Hope & Joseph, getting storylines together, seein' as though they're brother & sister in real-life… #Corrie."

Another fan tweeted: "Aw how lovely. Hope and Joseph, real life brother and sister in a scene together. Really talented actors #Corrie."

"I love these scenes with Hope & Joseph knowing they’re siblings in real life!" someone else gushed.

William and Isabella aren’t the only skilled actors in the family, however – as they are also siblings to Emmerdale star Amelia Flanagan.

Amelia, who plays April Windsor on the rival ITV soap, has even been pictured alongside her soap star siblings in a sweet Halloween snap posted by their dad Chris.

Taking to Twitter back in 2019, the kids could all be seen dressed in different costumes as their dad penned: "Lovely seeing all three kids on TV tonight, doesn’t happen very often! Here they are pretending to be different people… again!"

The proud dad regularly shares updates on his talented youngsters on social media, writing in September last year: "So proud watching these two tonight, they’ve had such a busy few months and still lots more to come for Hope @itvcorrie and April @emmerdale. Thanks for all the lovely comments!"

Isabella has been involved in plenty of tense storylines on the cobbles in recent years, from the arson attack on Alina and Tyrone’s flat to Hope’s reunion with nasty half-sister Jade.

In Emmerdale, Amelia’s character April has had to face a cruel bullying storyline from close friend Cathy, as well as tackling her dad Marlon being in prison and the death of her mum Donna.