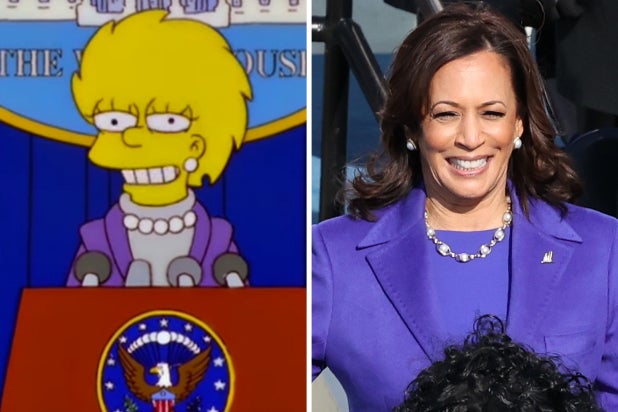 Vice President Kamala Harris won accolades for her fashion at the inauguration on Wednesday — but did “The Simpsons” once again predict her choice of attire?

For her swearing in as the nation’s first female vice president (and first Black and Indian American as well), Harris wore a purple dress and coat by the award-winning young Black designer Christopher John Rogers (along with shoes by Sergio Hudson).

In addition, a classic 2000 episode of “The Simpsons” imagined a future in which an all-grown-up Lisa Simpson was elected president of the U.S. and tries to bail the nation out of financial ruin. (The episode, “Bart to the Future,” also infamously references the past presidency of Donald Trump — a full 16 years before the real estate mogul and reality TV star was in fact elected to the White House.)

And in that episode, Lisa can be seen behind the podium at the White House (and in the Oval Office) wearing a purple jacket with a striking similarity to Harris’ Inauguration Day attire.

Of course, this is not the first time that “Simpsons” fans have found the show to be predictive of future events. In its three-plus decades on the air, the show has depicted yet-to-happen events ranging from Nobel Prize winners to the tiger attack on the late Vegas magicians Siegfried and Roy. Not to mention, well, the presidency of Donald J. Trump.