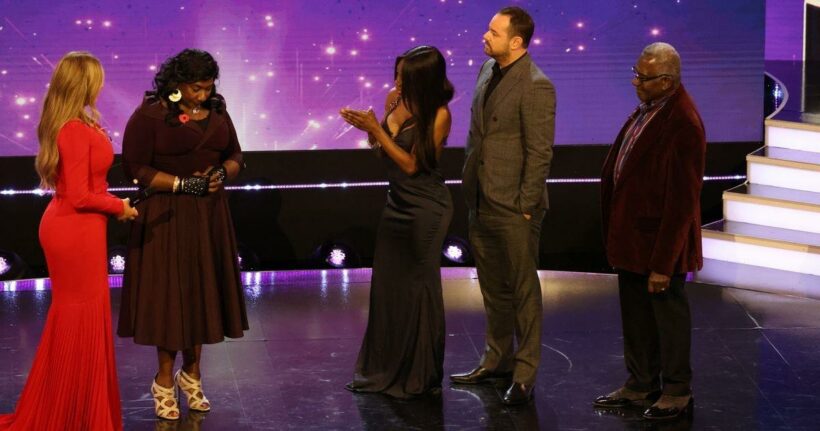 EastEnders Diane Parish led her fellow co-stars as they joined Gee Walker on stage to celebrate her mission to promote racial harmony in the name of her son Anthony Walker.

Gee was celebrated by the crowds of attendees and celebs alike as she joined the BBC One soap stars on stage to accept her award.

When they appeared on stage, Diane said: "Your capacity to take pain and turn that pain into hope and action is an inspiration for every single one of us.

"It doesn't matter what colour or gender we are. You are an inspiration, all I can do is salute you."

Gee appeared grateful to receive the award and hear the comments from Diane, and the crowd was absorbed by her incredible story and her mission for racial harmony.

The Daily Mirror Pride of Britain Awards, in partnership with TSB, celebrates the nation's unsung heroes and people across the country who have done extraordinary things, like Gee.

Gee, 67, was awarded a Pride of Britain Special Recognition Award after her ongoing work following the tragic racial attack on her son Anthony in 2005.

The 18-year-old, who had dreams of becoming a lawyer, was chased from a bus stop in Huyton and killed with an ice pick in an unprovoked attack.

Gee said: "I forgive them. I don't hate them. Hate is what killed my son. I am in enough pain. Why take on and carry about hate and anger as well?"

In 2006, Gee launched the Anthony Walker Foundation in a bid to combat racism and offer a space for people to feel safe after experiencing racial abuse.

Through educational outreach programmes in schools, the Foundation worked with nearly 40,000 young people in the last five years alone.

The Anthony Walker Foundation shared its support for Gee on Twitter on Tuesday night, adding that they're "so incredibly proud" that she was awarded with a Special Recognition Award.

Many celebrities across the UK attended the awards ceremony to share their support for the unsung heroes across the country.