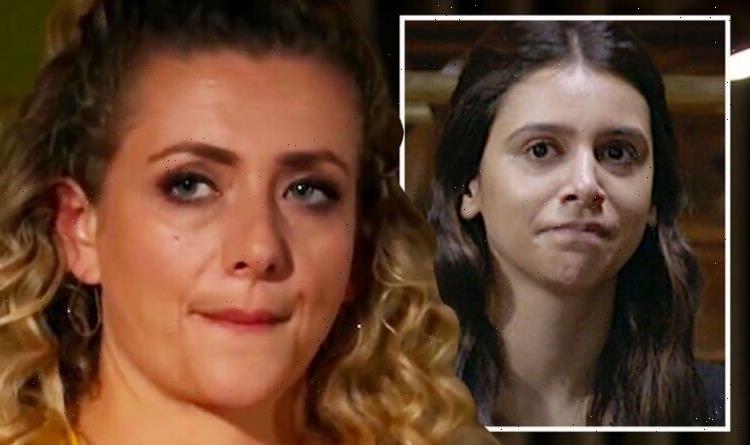 Maya (played by Louisa Clein) was last seen on Emmerdale in 2019 after her crimes were exposed having been grooming and having a sexual relationship with a minor, Jacob Gallagher (Joe-Warren Plant), for months. Although she has a son living in the village with his father, David Metcalfe (Matthew Wolfenden), she has made no attempt to make contact but Meena’s (Paige Sandhu) might have caught her attention in the press. On hearing about how the ITV soap villain tried her best to assassinate Liam Cavanagh’s (Johnny McPherson) character, Maya could make contact with the doctor to help him bring his archenemies to her knees.

In Wednesday night’s episode, Meena took to the stand to give her side of the story, despite her legal team advising against it.

When she had her chance to speak, she claimed Ben Tucker (Simon Lennon) was trying to hurt her before she killed him and she also had no recollection of what she did to her sister, Manpreet Sharma (Rebecca Sarker).

The one fact she kept playing on, however, was a supposed affair she had with Liam a few months ago around the time she also supposedly fell pregnant.

Viewers and most of the village know the pair weren’t seeing each other behind Leyla Harding’s (Roxy Shahidi) back but Meena was willing to it look as if he was the catalyst behind her behaviour.

“Liam is not who people think he is,” Meena remarked, making it seem as if she was the only person who truly knew the doctor.

“He’s cruel, controlling and I was so scared. I thought he was going to kill me,” she continued, further painting Liam in a bad light.

“He turned everyone against me, even my own sister,” she added, with the crackle tears rolling down her face and the jury seemingly believing her.

When she was interrogated by the prosecution, Meena dug deeper as she started to bring Liam’s daughter and her victim, Leanna Cavanagh (Mimi Slinger) into the conversation.

“Let’s be clear, Leanna’s death was no coincidence. She was not a happy girl, her mother was dead and her stepmother Maya was a paedophile.”

“And her father is a womanising control freak with a horrible temper,” she told the court and the mention of Maya could be a hint towards the villain’s return.

Liam’s ex was a peadophile

With it seeming Meena is going to get away with murder and the countless other crimes she committed, Liam and the others could look at ways to contradict what she is saying.

Liam has already taken to the stand this week but he let his emotions take over when he was accused of having an affair with Meena.

This made him look bad in the eyes of the jury and there is no chance he can redeem himself before the trial comes to a conclusion.

Therefore, he could tell the prosecution to make contact with Maya and instruct her to take to the stand to clear his name.

Before he arrived in the village, Liam was in a relationship with Maya and she was a stepmother of sorts to his daughter.

Liam didn’t realise when they were together she was a sex offender and he was furious when he discovered what had been happening between his former lover and Jacob.

The villain has since spent time behind bars for her crimes but she could be the only person who could tell the court what kind of man Liam really is.

With no reason not to turn up, Maya could be called as a last-minute witness to explain what Liam was like when they were together.

She could explain he was an extremely hard worker who never once showed any ounce of controlling behaviour or manipulation.

Maya could put on the show of a lifetime as she praises the doctor and makes the jury change their mind about him.

However, this wouldn’t just make Liam look better but it would also be fundamental in taking Meena down for her crimes.

The jury and judge would see Meena has the ability to lie well and if she has lied about the affair, what else has she made up?

With Meena’s freedom on the line, Maya could have put the final nail in the coffin and sealed the killer’s fate.

From what once could have been an allegiance between Maya and Meena because of their manipulative ways, this could be almost a betrayal.

Although Maya will never be redeemed for what she did, this would make Liam thankful for the romance they once had as she was the only person who could fight his corner.

Leyla would have been an option but she would have also been biased, having known Meena since she arrived in the village.

During Wednesday’s episode, she was also told to leave the courtroom as she lost it with Meena for lying about Liam on the stand.

Unfortunately, in the eyes of the jury, this made her look as short-tempered as Liam, leaving the couple in the lurch.

With Maya possibly contributing to Meena’s downfall, could this mean the villain will make an exit after being found guilty of murder?

Emmerdale airs weekdays at 7:30pm on ITV, with an hour-long episode airing on Thursdays.