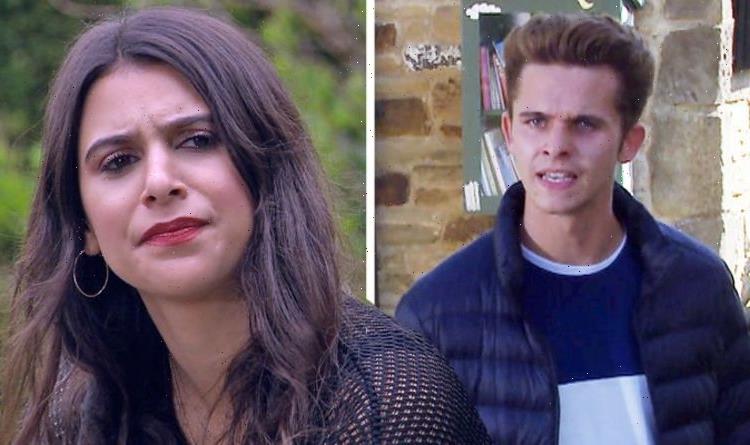 Jacob Gallagher’s (played by Joe-Warren Plant) world was turned upside down last week when his girlfriend, Leanna Cavanagh (Mimi Slinger) was found dead. Emmerdale viewers tuned in to see Meena Jutla (Paige Sandhu) torment the teenager before pushing her off the bridge and onto the dried-up riverbed below. She then noticed Leanna was struggling for breath before confirming her death by checking her pulse. The soap has revealed Leanna is going to be Meena’s first victim – with suggestions she is going to take a few more. But will Jacob expose her before she turns into a serial killer? The actor who plays Jacob has discussed the possibility.

Speaking about how Jacob is coping, Joe-Warren said: “It has been and is going to continue to be extremely difficult for Jacob.

“He has never really experienced the death of someone this close to him and, given his age and how much he cared for her, I can imagine it being a hell of a struggle for him to come to terms with it.”

But does he blame himself for Leanna’s death? The actor says his character “holds himself responsible especially after Liam‘s accusations towards him”.

“After Jacob told her he had changed his mind about going travelling, he saw the effect it had on her and he believes that drove her to drinking excessively,” Joe-Warren added. “Causing her to fall off the bridge.

“He’s constantly self-blaming, feeling guilty and upset because of it.”

In recent scenes, Jacob lashed out at Leanna’s father, Liam Cavanagh (Johnny McPherson) at the scene of Leanna’s death, Joe-Warren explained why he did this: “Because Liam was in total shock it left him empty and emotionless.

“When Jacob started questioning the investigator he noticed Liam’s lack of concern and as a result of that, Jacob’s anger took control and he instead released all the energy he believed Liam was missing.

“Even though Jacob never really showed it whilst she was around, he deeply cared about Leanna.”

As for whether Jacob has any suspicions over Leanna’s death, the actor revealed: “After her death he notices that the ring he had bought for Leanna has gone missing and hadn’t been collected from the crime scene.

“He is quick to then assume the possibility of her being attacked but the idea is quickly shut down by Meena, David and Liam.

“I think after the shock of the situation calms down it won’t be long before another event could possibly raise Jacob’s questions and concerns again,” he added.

And does he have any suspicions about Meena in particular? “She has shown a softer side to Jacob after Leanna died.

“He still doesn’t trust her 100% but no one thinks for a second that Meena has anything to do with Leanna’s death.”

Jacob and Leanna had decided to go travelling this year, but now that’s been taken away from Jacob – what is next for him?

“I’m not really too sure what’s next for Jacob going forward,” Joe-Warren admitted. “No doubt it’s going to take him a while to recover from what’s happened.

“He hasn’t been fully happy since everything that occurred with Maya and now he’s had another layer of his character stripped away from him with the trauma of Leanna. But hopefully he can soon get back to his old happy, enthusiastic self.

As for whether Jacob will be able to move on from Leanna, the actor explained: “Although Jacob ended up jetting off to Portugal for a while, I really do think he felt something for Leanna as he came back with a ring ready to propose.

“Whether that was the right thing to do, probably not, he is still very young.

“But now she’s gone Jacob is going to feel huge amounts of regret and remorse for the way he acted with Leanna.

“He feels he should have cherished her more and never have left her.

“I don’t think Jacob will ever get over the trauma fully. However, he has people always willing to pull him out of that dark place,” he said.

“Jacob is cared for by a lot of people in the village, obviously David and Leyla, but also his friends,” Joe-Warren explained.

“Gabby, Liv, Amelia, Sampson all helped to create the send off he would have wanted for Leanna’s funeral.

“Although it’s going to be very hard for Jacob there will be people by his side the whole time to look out for him.”