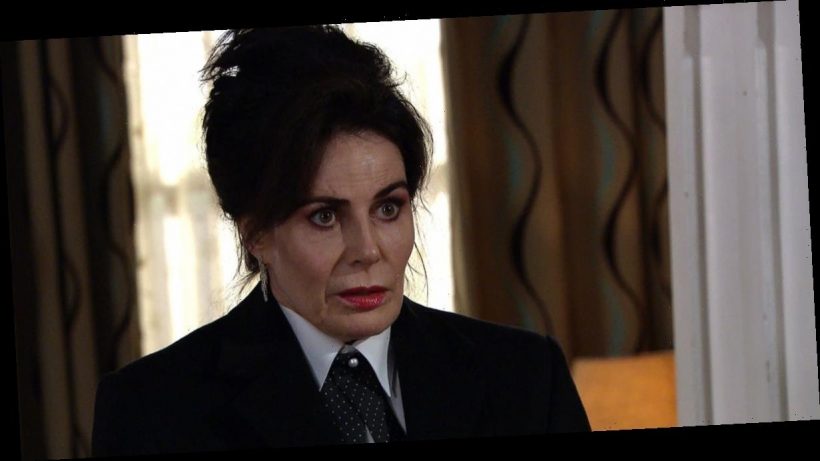 Emmerdale said goodbye to Faith Dingle in October of 2019, as she climbed into a taxi, leaving for another life after disgracing herself and destroying her relationship with son Cain Dingle.

However, next week will see the Emmerdale matriarch make an explosive return, as Sally Dexter rolls into the village behind the front wheel of a hearse.

Speaking to Daily Star and assorted press, Sally, 60, discussed whether Faith's return would be a permanent one, admitting she wasn't certain.

Sally did confess she was thrilled to return to the role, praising the ITV soap's dedication to continuing the production throughout the pandemic.

She said: "It's quite impressive what they've done with all the Covid restrictions.

"They've worked out an extraordinary rota and I'm full of respect for what they've done. And the canteen's still running, I've no complaints."

She added: "It's great to see everybody but, oh my gosh, the frustration of not being able to run up and give everyone a big hug is just extraordinary."

Faith's dramatic exit came after it was revealed she covered up the existence of Cain's (Jeff Hordley) lovechild, Nate Robinson (Jurell Carter).

When he was conceived, she urged Nate's mother, Cara Robinson, to leave the village in secrecy, fearing the reaction from Cain's racist father Shadrach.

When Nate returned to the village decades later, seeking his father, Cain was shocked to learn Faith had kept his birth a secret.

Seething at his mother over her lies, Cain dismissed Faith from his life, leaving her no option but to pack her bags and move elsewhere.

However, upcoming scenes will see Moira Dingle (Natalie J Robb) run into Faith in a car park, confronting her.

Faith later turns up at the farm and reveals she has been embroiled in a toxic relationship with an undertaker, begging forgiveness from her family.

While Moira relents, taking pity on her, Cain refuses to give in to his mother's charms and kicks her out of their home.

Can Faith turn the situation around, or is another exit on the horizon?

Emmerdale airs on weekdays at 7pm on ITV, with an extra helping on Thursdays at 8pm.