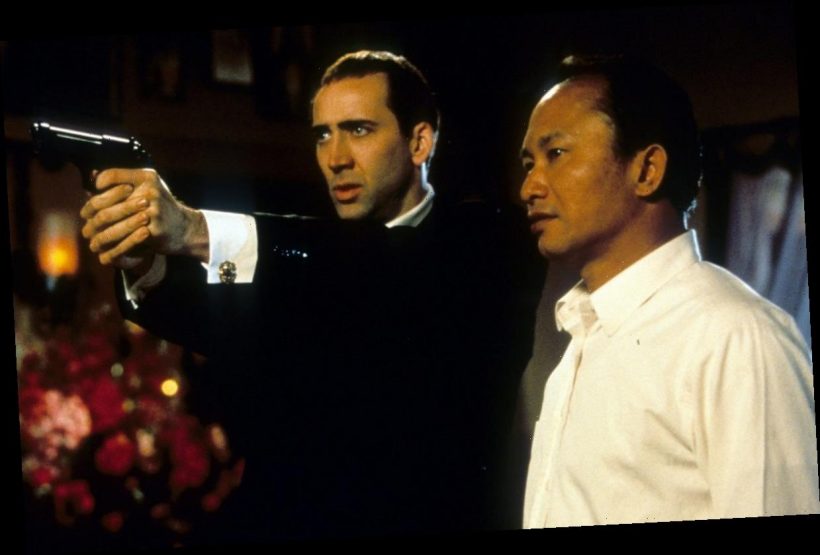 A sequel to Face/Off is in the works. Paramount hired Adam Wingard to direct the movie, who announced that his film is a sequel to the 1997 Nicolas Cage/John Travolta two hander, not a remake. Simon Barrett is writing the script to what will be Face/Off 2. Little else is known about their take at this stage, but Showbiz Cheat Sheet was able to get some information about the potential rating for the sequel.

Adam Wingard spoke to Showbiz Cheat Sheet about his latest film, Godzilla vs. Kong. We’ll have more with Wingard before the film premieres in theaters and HBO Max March 31. First, Wingard confirmed Face/Off 2 will be rated R.

When Face/Off came out in 1997, R-rated action movies were the norm. However, in the 21st century, PG-13 action movies became more the norm from The Lord of the Rings to the Bourne franchise. Fans were not amused when sequels to Die Hard or Terminator movies were PG-13 after R-rated predecessors. Wingard would not make a PG-13 Face/Off 2.

“I think that’s what makes it so interesting,” Wingard said. “Doing a sequel to Face/Off kind of gives us the permission to go back and make this sort of manly driven action movies, violent rated R action movies that you don’t see nowadays. I think, because there’s not a lot of that, that’s what makes it unique and I think that’s why people are so interested. ‘Oh, this might be kind of a throwback in a way that’s very interesting and still modern at the same time.’”

Face/Off 2 is still in early development. They haven’t finished the script, let alone filmed a frame, so they don’t really know what kind of rating the MPAA will slap on them. Presumably, they are not toning it down to aim for PG-13.

“I would walk away from the project if somebody told me that you can’t do it Rated R,” Wingard said. “That’s a dealbreaker for me.”

Wingard and Barrett got their start making indie horror films like A Horrible Way to Die, You’re Next and The Guest. They also did Blair Witch together and Wingard went on to do Death Note and Godzilla vs. Kong separately. Wingard said he always wanted to play with big Hollywood franchise like Godzilla, King Kong and Face/Off 2.

“The inspiration that always got me into wanting to make films in general were always the Star Wars movies, the Alien films, Predator films, all those classics,” Wingard said. “There are certain movies I just love so much that I’d love to be able to put my imprint on, obviously like Godzilla vs. Kong, Face/Off. Sometimes these are just the movies that are available. These are the movies that studios feel comfortable spending money on. If you want to do these bigger movies, at least in terms of a filmmaker like myself who’s still working his way up, this is the way to do it.”

Wingard likes horror movies too, and credited those movies with allowing him to get movies made at all. He does plan to go back after Face/Off 2.

“Will I do these type of things forever?” Wingard said. “I keep telling myself I’m not going to and then the very next movie I’m doing right now is Face/Off. I have a couple other things and they’re all IP related. So who knows but I also have a couple things I’ve been working with Simon Barrett, some originals. Simon and I wrote our first script together over the quarantine that I’m really excited about. It’s a smaller film and it’s totally original, so hopefully we’ll get a chance to do that in between one of these big IP blockbusters.”