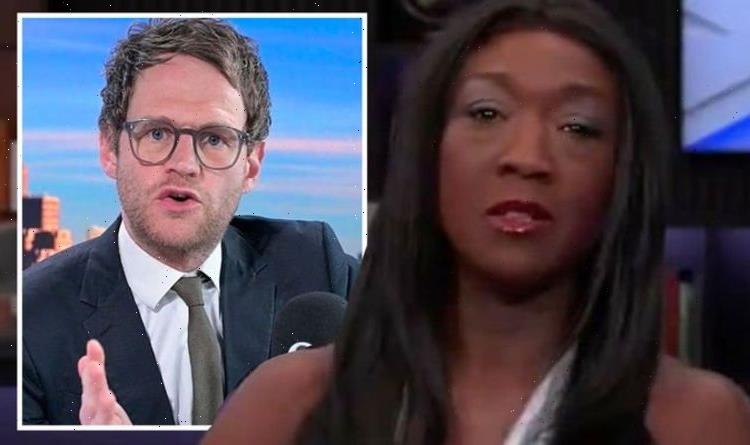 Mark is best known for hosting his own Drivetime show on TalkRadio for the past two years but he is jumping ship to join GB News from Friday, July 23, 2021. With 20 years of broadcasting experience behind him, he will be taking Nana’s Friday and Saturday night slots to oversee proceedings on his chat show, Late Night Live. It will run from 9pm until 12am and he will speak to numerous guests about topical matters making the headlines.

On joining the network, Mark said: “I’ve had a wonderful time at TalkRadio but the opportunity to shake up the current affairs broadcasting with GB News is just too good to miss.

“My show will tackle the issues that really matter to people across the United Kingdom in a stimulating, informative but entertaining way.

“My one promise is that I won’t be boring,” he concluded and viewers will only have to wait a couple of days to see him make his debut.

Nana is remaining with the channel and will be moving to host a programme on Saturday and Sunday afternoons which will air from 3pm.

The broadcaster will also continue to be a regular show on The Great British Breakfast, which airs weekdays on the channel.

With the newcomer shaking up the schedule, it seems Dan Wootton’s Sunday night slot will also be altered to make way for the new programme.

It is likely Dan will now host his edition of Tonight Live from Mondays to Thursdays in accordance with the schedule changes.

Mark has become a huge name on social media, with his views on topical matters becoming viral online.

The broadcaster has put his name to programmes focusing on political affairs, entertainment and has turned his hand to documentaries in the past.

I won’t be boring

Mark has also been a pundit on Sky News and featured in reality television shows including Celebrity Mastermind, Celebrity Come Dine with Me and The Jump.

Taking to Twitter, viewers have reacted to the news of the latest edition to join the ever-expanding team.

One avid fan of the broadcaster wrote: “Great appointment. Really enjoyed listening to @mrmarkdolan on TalkRadio.”

Another added: “I met him once. Super nice guy! Wish him the best.”

However, not everyone was convinced as a third posted: “Shake up current affairs broadcasting with a weekly reach of 1.15m? Forget it. Reckon [Andrew Neil] was reaching more viewers on late night debate show this week than a whole week of GB News reaches currently. And the ratings are still shrinking!”

“So where’s Nana Akua going?” a fourth asked, seemingly confused by all the changes to the presenting line-ups.

In view of his 30,500 followers, he said: “Thrilled to announce I’m joining @GBNEWS for a new prime-time show Friday to Sunday, starting this Friday at 9pm.”

“My deep thanks to the team at @talkRADIO, led by the amazing @DennieMorris,” he continued as he paid tribute to his former colleagues.

“My greatest thanks go to you, my listeners. I hope you will join me for the next adventure,” he concluded.

Mark’s appointment comes just a few days after former UKIP leader Nigel Farage secured his own programme on the channel.

In a statement, the politician said: “Since politics I have done a fair bit of broadcasting and broadcasting matters, it really, really does.

“It gets people to look at issues, think about issues in different ways and can be very influential,” he added.