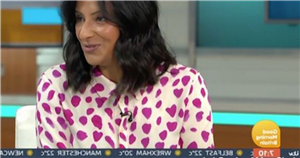 Good Morning Britain's Ranvir Singh has revealed that she received a phone call from her son's school after speaking about him being subjected to racial abuse.

Speaking on Wednesday's episode of the morning talk show, the 43 year old was emotional as she spoke of the racism she and her nine year old son Tushaan face frequently and are forced to think about every day of their lives.

And after previously discussing the situation publicly, Ranvir praised her son's school for calling her to check up on his wellbeing.

"What was really interesting yesterday was I got a call from the school, just asking if everything was okay, which was good, you know, and I think that's what all schools should be doing with all children of different backgrounds at the moment, actually," she said.

She added to hosts Richard Madeley and Susanna Reid: "It's a showing of care and understanding that there may be conversations in the home that children feel uncomfortable having in the classroom, and that shouldn't be the case.

"So I thanked them for that."

Speaking of the disgusting racism England players were subjected to following their loss at the Euros 2020, Ranvir went on to slam those opposed to taking the knee.

"I would say this: Courage is contagious, right," she said.

Ranvir continued: "The factor is that you can feel inspired by other people to be courageous in your own life and speak up in your own workplace."

"What I find astonishing is that the taking of a knee is the most peaceful of protests, it is Gandhi-esque. It is peaceful, it is quiet. It is a simple note.

"For it to cause such a provocation in people who don't like it shows you exactly why it should be done, right.

"It is riling exactly the right people, in my view," Ranvir, who was recently forced to stop presenting after her son Facetimed her live on air, concluded.