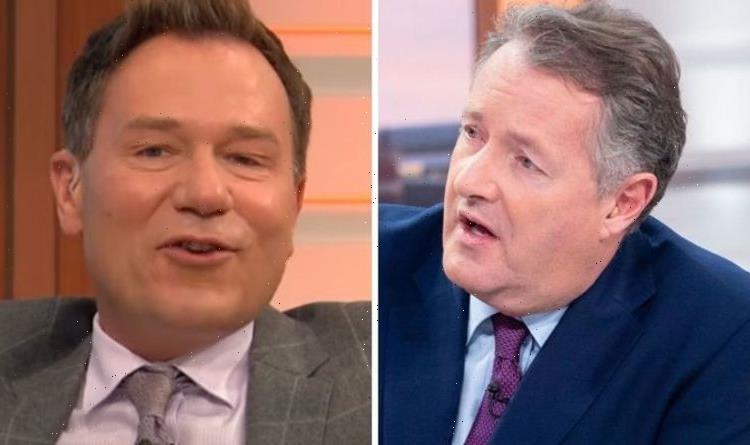 Piers Morgan left Good Morning Britain in March following his comments about Meghan Markle and Prince Harry’s interview with Oprah Winfrey. The 40-year-old sparked backlash from GMB viewers after he labelled Meghan’s claims in her Oprah interview as false. Piers’ remarks led him to storm off the ITV set and as a result, he decided to leave his role on the breakfast show.

In March 2021, Piers stormed off the GMB set after he clashed with his co-star Alex Beresford over his comments about the Duchess of Sussex.

Shortly after, the presenter bid farewell to the programme and his co-host Susanna Reid.

ITV hasn’t replaced Piers with a permanent presenter, although ever since his exit, they have welcomed a number of guest presenters.

Adil Ray, Ben Shephard and Richard Bacon are a few of the names that have co-hosted the show.

However, in an exclusive interview with Express.co.uk, entertainment presenter Richard Arnold spoke about Piers’ replacement.

When asked about who is replacing Piers, Richard simply replied: “I honestly don’t know.

“I think it’s a roster of very impressive names that have taken up his seat in recent months.”

Discussing whether he would ever want to take Piers’ seat, Richard insisted: “No, I love being just at the edge of the frame and surfing the frost.”

“I love the tinsel too much,” he added.

Richard, who has been a staple on GMB since 2014, went on to address his future on the programme.

He joked: “I love the tinsel. That’s always been my job and I’m very happy doing that for as long as they’ll have me.”

The 51-year-old also opened up about losing his father four years ago and what helped him to cope with the grief.

Richard, along with Lottie Tomlinson, Malin Andersson, and actress Davinia Taylor all joined forces with Sue Ryder in her digital campaign about grief.

Speaking about the importance of the campaign, Richard explained: “Sue Ryder got in touch because they’d heard me talk about how my dog was a great comfort to my mum and myself when my dad passed away.

“About four years ago he passed away very suddenly. So, he was in very good health, he just had a nice Sunday lunch and then the last thing he said to my mum was, ‘thanks for my dinner’.

“And then the following Monday he just didn’t wake up, which of course was a dreadful, dreadful shock to Mum.”

Richard added: “He was 81, but he was very robust in spirit and in health, and it was just a sudden and sharp exit.

“So, over the last four years, like anyone who’s experienced grief, this is as close to home as it ever got.

“After the initial shock, you go through the anger and mum certainly did and then, of course, your relationship changes with your parent, the one that’s left.

“And I’m an only child, so I moved mum up to London to bring her closer. I wanted to make sure that she was at the front of the engine if you like, near me so that I could keep an eye on her.”

Good Morning Britain airs weekdays at 6am on ITV.