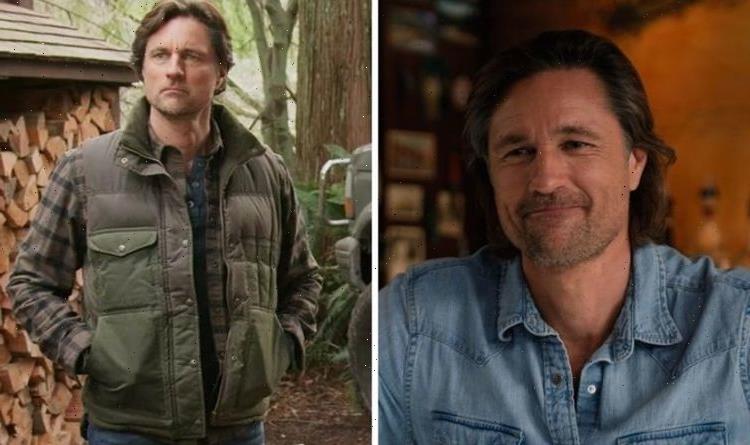 Netflix’s romantic drama will soon be back on screens as fans were treated to a sneaky behind the scenes clip of the stars filming season four. This video also showed production had to pause for a short while so the crew could sing Virgin River star Martin Henderson a happy birthday.

In the series, Martin played Jack Sheridan, an ex-marine turned bartender, who was living a complicated life in season three.

On Friday, a video was posted on the Virgin River Instagram account, showing the actor celebrating his 47th birthday on October 8th.

He was surprised by the cast and crew as they burst out into the happy birthday song before bringing out a cake with candles aflame.

The video was captioned: “Happy birthday!!! @martinhendersonofficial Have an amazing birthday!! We [heart emoji] you!”

Fans swarmed to the comments to share their well wishes and also with the actor a happy birthday.

Shiela wrote: “Somebody with the biggest, brightest, most giving heart is celebrating his birthday today! May it be a joyous occasion filled with love from all those around you who adore you for the wonderful person that you are! Happy birthday Martin.”

“Happy Birthday, have the best day, can’t wait for the new season to start,” shared Michele.

With the upcoming season to look forward to, fans are rest assured about the following instalment as that was also confirmed on the same day.

Perhaps, viewers will soon be able to finally find out who shot Jack, in the season two finale, which was still a mystery by season three.

Another mystery was the whereabouts of Hope McCrea (Annette O’Toole) who happened to be absent for the entire season.

As the mayor and the town’s busybody, her absence didn’t go unnoticed by fans who questioned this.

Thankfully, showrunner Sue Tenney was able to answer these questions during her interview with Entertainment Weekly.

She revealed the pandemic was the main reason the actress wasn’t able to make it to set, so they had to rework lines including her highly anticipated vow renewal with Doc Mullins (Tim Matheson).

Sue assured fans: “If we have a fourth season, everyone is now vaccinated and the pandemic is not what it was. So, I would hope that we would have Annette back.”

With the confirmation of season four, hopefully, viewers will see Hope return to screens.

Fans are also waiting to see what Jack will say to his girlfriend Mel Monroe (Alexandra Breckenridge) after she revealed she was inseminated with her dead husband’s baby during their break-up.

It was a jaw-dropping moment for fans, when she told him she was pregnant but it’s yet to be seen if it’s his or her dead husband’s child.

Season three also saw Jack slowly repair his relationship with his ex-girlfriend Charmaine Roberts (Lauren Hammersley) who is pregnant with his twins and in a toxic relationship.

With so much on his plate, fans will have to tune in to see how Jack will deal with each situation.

Virgin River seasons 1-3 are on Netflix now, with season 4 currently in production.