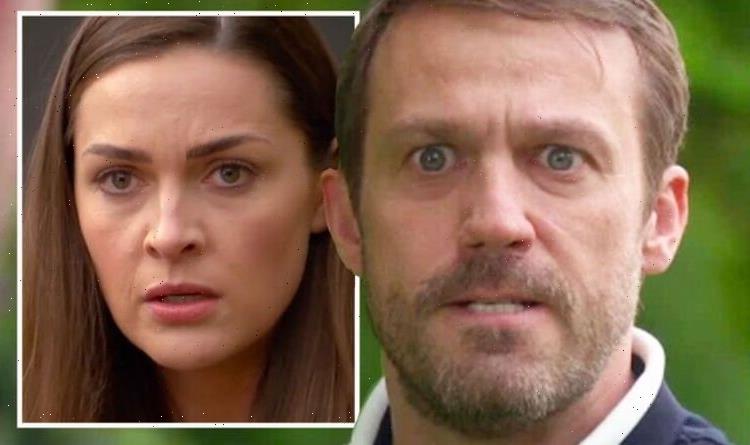 Warren (played by Jamie Lomas) has been in huge amounts of pain since he was involved in a hit and run earlier this year on Hollyoaks, with the villain still having no idea Ethan Williams (Matthew James Bailey) was behind the attack. The bad boy of the Channel 4 soap has since formed a partnership with his assailant, buying prescription drugs from him to try and medicate the injuries he still carries. Unfortunately, he has become addicted to the medication and in the closing moments of Tuesday’s episode of the television drama, Sienna (Anna Passey), finally realised what had been happening but she might have just put her life in serious danger.

The episode began the day after Warren’s flat was engulfed with smoke as he’d passed out whilst looking after his children and left pizza cooking in the oven.

Sienna praised her former lover for being a hero and she wanted to celebrate his efforts in saving their twins from being killed.

His current girlfriend, Maxine Minniver (Nikki Sanderson), was very jealous of what Sienna was doing as she was convinced her love rival was trying to get back into bed with the villain.

After finally being allowed back into his flat, Warren spoke with his son Joel Dexter (Rory Douglas-Speed) about why God hadn’t punished him for killing Brody Hudson (Adam Woodward) last year.

As a man of the cloth, Joel told his father God was giving him a chance to redeem himself and to be a good father to his twins.

With this in mind, Warren was convinced he was going to stay on a straight and narrow path, putting his criminal life behind him.

He called on Sienna to ask if they could christen their children as he wanted them to be given guidance through their life, something he never had.

Enamoured by this new side to her former lover, Sienna decided she was going to stay a little while and enticed Warren into bed.

Although he wanted to be good, he ended up cheating on Maxine and just before the credits rolled, he was looking forward to spending more time in bed with Sienna.

Unless for him, his drug secret was exposed as when she was looking for something to drink, the twins’ mother found his supply.

Sienna is in love with Warren

These were the same pills she’d helped Ethan acquire during a recent drug deal and she knew Warren was going to have a tough time explaining himself out of this.

Upcoming scenes will likely see Warren and Sienna going head to head as the latter tells her former lover he is not fit to care for their children.

The twins mean everything to the villain and he would do just about anything to make sure he got custody of them, despite still having feelings for their mother.

Knowing Sienna needs to be out of the picture for good, Warren could decide he is going to get rid of her once and for all.

With the mother of his children having ammunition to bring him down, he could order one of his associates to kill her.

If he were to do it, Warren knows he would feel extremely guilty as he does still harbour feelings for the love of his life.

In this instance, he might be able to do it himself anyway as he knows Sienna means more to him than anyone ever has or would.

Of course, it would be a heartbreaking end to Sienna’s time in the village, given how many rivals she has fought off in the past.

However, Warren has always been her Achilles heel and so it would be fitting he would be the one to end her journey.

The Channel 4 soap also has the highest death count of any other programme on television and so Sienna dying isn’t completely out of the question if she were to exit.

The actress who plays Sienna, Anna, has spoken out about her character’s relationship with Warren before and the connection the pair have.

Anna previously explained: “[She] is in love with him and does want to spend the rest of her life with him.”

As for her ideal outcome for the troublesome duo, she added: “To have the babies and for them to be well and for her and Warren to be stable so that then she’d know if anything bad did happen, the children would be well looked after.”

But it seems a fairytale ending for the two characters is looking more and more unlikely as they continue to hide secrets from one another.

If Sienna were to discover Warren was going to order her death, however, she could turn the tables and use Ethan as a way to take down her former lover.

Addressing her relationship with bad boy Ethan, Sienna actress Anna said: “I’ve seen a lot of comments along those [romantic] lines which really surprised me.

“I think the more Ethan sees of Sienna, the more impressed he is, and the more respect he has for her. She’s a strong woman too, and she does remind him of [his ex] Maya.

“At this point, Sienna is full of loathing and wouldn’t even entertain the idea. But we’ve seen her go from hating someone to liking someone on the flip of a coin in the past — so who knows?” she told Inside Soap.

Is there a chance Sienna could use her charm to win over Ethan and make him do her dirty work?