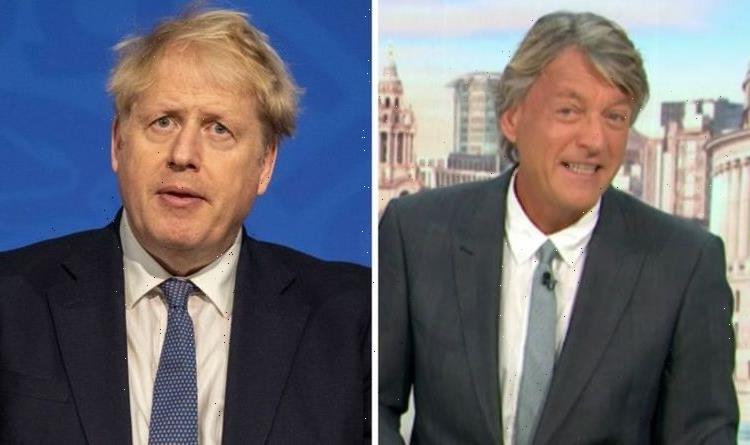 On Tuesday’s Good Morning Britain, ITV hosts Richard Madeley and Susanna Reid were back to discuss the latest news headlines. One of the main topics of discussion was regarding the claims against Prime Minister Boris Johnson, who allegedly attended a party at Downing Street last year.

A leaked email claimed more than 100 people were invited to a “bring your own booze” party at Number 10 Downing Street in May 2020.

According to reports, around 40 staff attended the party to eat picnic food and have drinks, including the Prime Minister and his wife, Carrie.

At the beginning of Tuesday’s GMB, Madeley slammed the Prime Minister over the claims.

“I don’t know about all of you but my jaw is absolutely on the floor,” the host raged.

He continued: “How much longer is this nonsense going to go on for?

“How much more evidence do we need to present to the Prime Minister to tell him and show him that he’s been breaking the rules?”

Reid chipped in: “The cheese and wine picture that we’ve all seen of the group in Downing Street had at least a tenuous justification. It was socially distanced for work purposes.

“This new party the email shows that it was a social gathering.”

She added: “It was a bring your own booze, make the most of the weather party on May 20.”

Madeley went on to add: “This would be when the Metropolitan Police had just issued a statement.”

The host continued to read out the statement from the police which discussed remaining socially distanced outside.

He read out: “You can relax, have a picnic, exercise or play sport as long as you are, on your own, people you live with or just you and one other person.”

“How many people were at this second party?” Madeley asked his co-host.

She replied: “Well there would have been one person plus 99 other people. It was a gathering of 100 people.”

GMB proceeded to air a clip of the Prime Minister laughing about the alleged reports.

The I’m A Celebrity star raged: “It is funny isn’t it Boris, you have to laugh, don’t you?”

“Especially when people weren’t allowed to attend funerals, locked out of care homes,” the 65-year-old said.

“I really do try and avoid Government-bashing and in this case Boris-bashing but this is such a provable [wrong-doing].

“It’s such an insult to everybody who was doing their very best.”

Madeley went on to explain they would address the claims with MP Edward Argar later on in the programme.

Good Morning Britain airs weekdays at 7am on ITV.