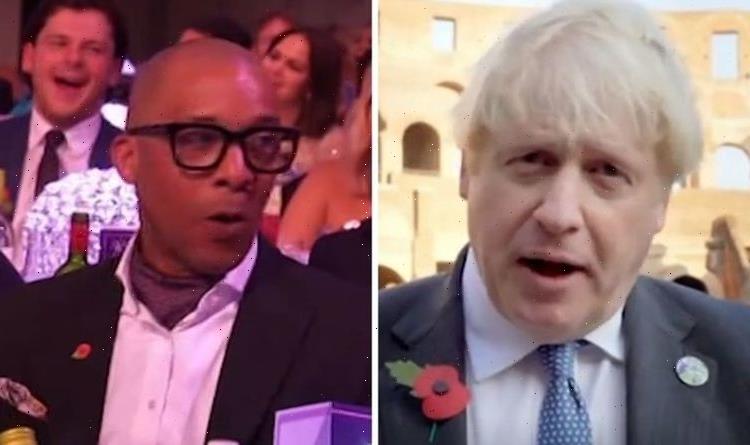 Jay Blades was one of the many celebrities who attended the Pride of Britain Awards which aired on ITV tonight. The event honours those who have shown bravery and courage throughout the year. However, when winners Amy and Ella Meek took a swipe at Prime Minister Boris Johnson during their acceptance speech, Jay was seen clapping in the audience.

Amy and Ella Meek, from Nottingham, were awarded the Environmental Champion accolade for their ongoing work against plastic pollution.

When the teenagers collected their coveted award on the stage, they were played a message from the Prime Minister who congratulated them for founding their social action group Kids Against Plastic.

When Amy, 18, and Ella, 16, were asked what they thought of the message by host Ashley Banjo they took a swipe at Mr Johnson.

Amy said: “It was definitely unexpected, but he’s not off the hook yet. We’ll see what happens at COP26 first.”

Pride of Britain viewers took to Twitter to comment on the amusing moment, with Mish Rodriguez saying: “Watching Pride of Britain Awards and loving it that Amy and Ella Meek said that Boris was not off the hook yet! Total Kudos Ladies!”

Carrie-Ann added: “Loved that they were honest about it and put Boris in his place. #PrideOfBritain”

Ash Evans joked: “Imagine picking up over 100,000 pieces of plastic and getting a thank you video from Boris… I think I’d put it all back in the sea, to be honest.”

Jo Turner told his followers the girls looked “so unimpressed” with their message from the Prime Minister.

Other ITV viewers said they were hoping Sir David Attenborough would be the person to thank Amy and Ella for all of their hard work.

Samantha quipped: “They were expecting David Attenborough but got Boris!”

Michael Drake said: “I thought they were gonna have David Attenborough and then Boris pops up.”

Amy and Ella’s action group, which is now a registered charity, calls for efforts against plastic pollution and encourages, individuals and businesses to ditch single-use plastics where possible.

The sisters have addressed politicians in Parliament and spoken at the United Nations’ Young Activist Summit about their mission.

Together, they have collected 100,000 pieces of rubbish, one for every sea mammal killed by plastic pollution every year.

They now run a scheme to champion other anti-plastic activists who do the same around the UK.

The Pride of Britain Awards were hosted by Carol Vorderman and Ashley Banjo while the award winners were chosen by a panel of celebrities.

The ceremony was attended by a host of starstudded guests including Ed Sheeran, England manager Gareth Southgate and Sharon Stone.

His Royal Highness Prince Charles was also in attendance as President of The Prince’s Trust.

The Pride of Britain Awards 2021 can be watched on ITVHub.