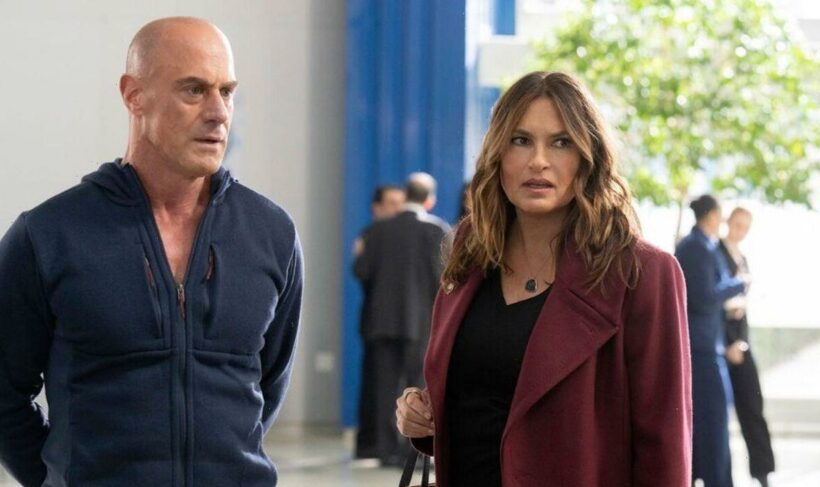 After starring on screen together since 1999, Law and Order fans have longed for Olivia Benson (played by Mariska Hargitay) and Elliot Stabler (Christopher Meloni) to get together. Despite putting their chemistry down to years of friendship, actress Olivia opened up about their relationship.

Both Olivia and Elliot were introduced to viewers in the pilot episode of the long-running procedural drama, Law and Order SVU, which premiered in 1999.

Throughout the show, the detectives worked together as partners until Elliot’s sudden departure in season 13.

Ahead of his exit, viewers expressed their desire for the duo to take their friendship a step further after they would have flirtatious banter.

However, this wasn’t possible as Elliot was married and had children with Kathy Stabler (Isabel Gilles), while Olivia struggled to find the right one.

Following Elliot’s departure, Olivia was promoted to Captain where she led the team of detectives to crack down on cases involving murder, abduction, robbery and child pornography.

After more than a decade apart the two friends finally had their long-awaited reunion during a major crossover episode with Law and Order: OC.

Christopher reprised his role as Elliot with his own spin-off in 2021 and his character apologised to Olivia for leaving without saying goodbye.

The stars opened up about their chemistry as they spoke about being friends off and on camera.

When asked about how they maintained their chemistry, Christopher answered: “It’s effortless.”

Mariska agreed: “It is, it’s effortless and it’s weird and I think its some sort of gift.

“So much of it has to do with our shared sense of humour, shared perspectives, our amount of history.”

Christopher shared: “Right before we got here, she sent me a series of texts which I responded to, I showed them to my wife, I’m laughing crazy, I go ‘look at this,” and she like..”

Before he could finish, Mariska chimed in: “Nobody else gets it, nobody knows.”

Speaking to People, Mariska added that she never gets tired of working with Christopher, while he called himself “lucky” to be back on screens with her.

The actress had previously addressed rumours about Olivia and Elliot potentially getting into a romantic relationship, with his return to the show.

As Elliot was now single, following Kathy’s death, Mariska shared: “Olivia Benson is hurt, he left me in the lurch for ten years. She’s frightened.”

The energy is there, Olivia’s been in love with him for many a year.

“And I think we are slowly finding our way back to it,” she confirmed on the Drew Barrymore Show.

“I want to give him the amount of time he needs to grieve Kathy Stabler,” Mariska added.

Law and Order: Special Victims Unit season 24 continues Sundays on NBC in the USA. A UK release date has yet to be announced.