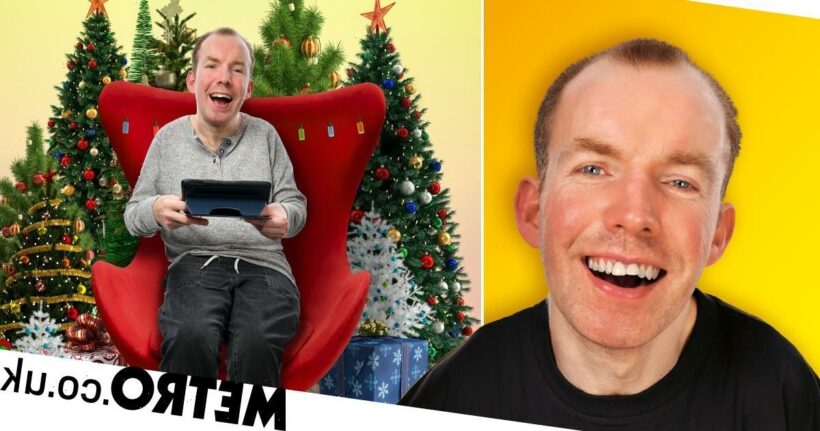 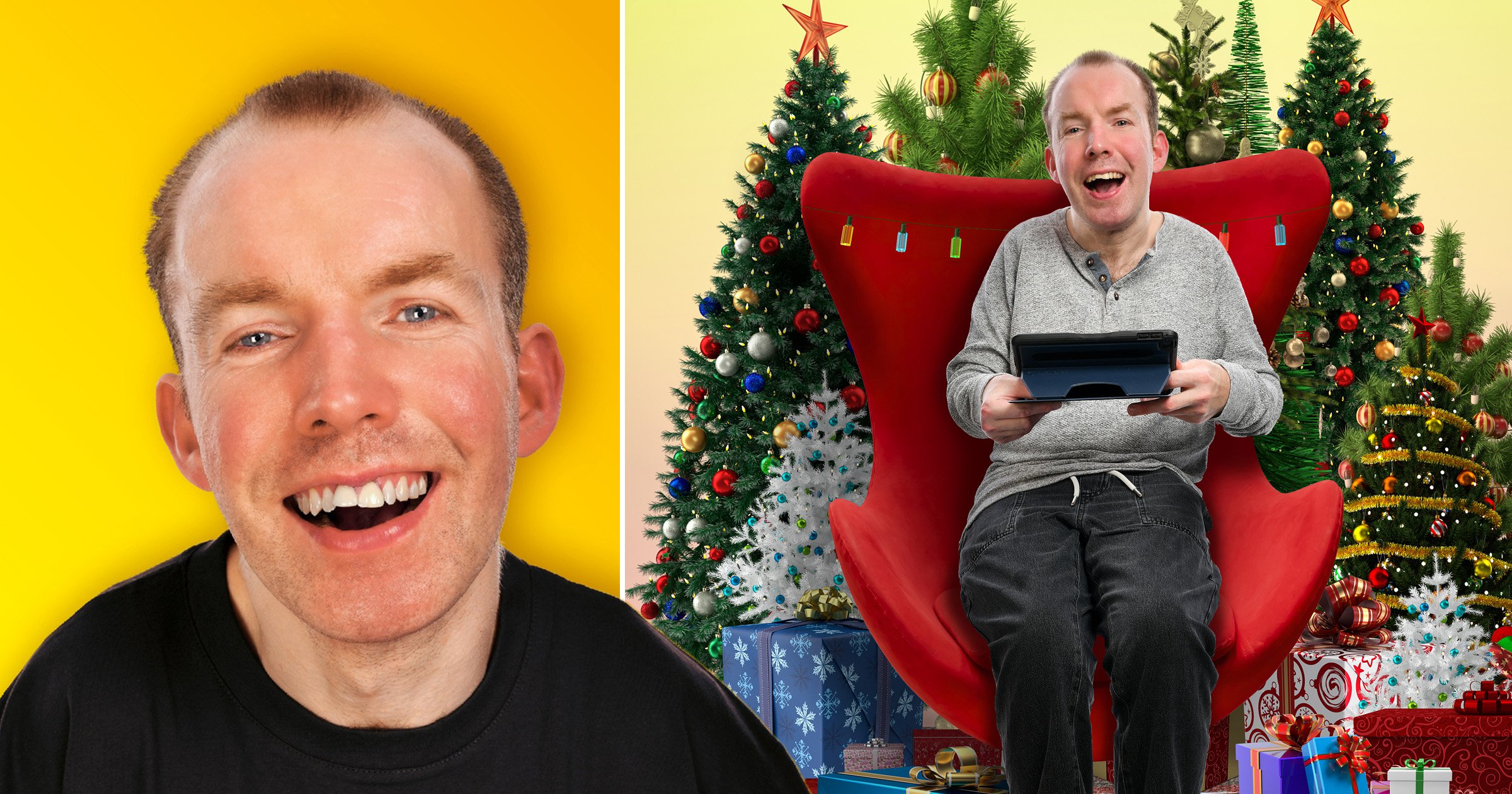 The 40-year-old, who was diagnosed with a neurological form of cerebral palsy as a baby, which affected his movement and rendered him unable to speak, stormed to victory in the 2018 edition of Simon Cowell’s popular talent competition.

Performing via a communication device, Ridley’s voice-synthesiser, with its posh but slightly robotic tone, became the comic’s calling card – but all that is about to change.

Speaking to Metro.co.uk ahead of the unveiling of his new voice on television, Ridley explained how it had all come about and what it meant to him to finally speak in the same accent as his friends and family, courtesy of speech synthesis company CereProc.

‘I’ve known about CereProc for a few years now, because obviously you get to hear about these things when you talk at speech therapist conferences and so on, so we’ve been in touch for a while,’ he said.

‘But the idea to create a Geordie accent for me happened after I presented a piece for The One Show about someone who couldn’t speak, who was getting a regional accent for his own device. I spoke to CereProc during the filming, and they said they’d like to do the same for me – so obviously I jumped at the chance.’

Ridley has no complaints about his ‘old’ voice but emphasised that it ‘means a lot to me to finally be able to sound like my family and friends’.

‘I’ve always wanted a Geordie accent. I don’t think my current voice represents where I am from, and it isn’t exactly the voice that I would have had, if I wasn’t disabled. To be honest, there’s nothing wrong with my current voice except from the fact that it sounds very posh. It sounds like I should be reading the shipping forecast on Radio 4!’

The comic’s new voice is in fact courtesy of actor and voice over artist Dan Pye, who Ridley picked out of almost 500 candidates offering their dulcet Newcastle tones to him.

‘Competition was very tough indeed,’ admits Ridley. ‘In fact, I was overwhelmed by the response from my fellow Geordies, and it made the job of choosing the right voice very difficult.

‘But, in the end, Dan’s voice was the one that I kept coming back to and listening to over and over again. I just thought it sounded quite upbeat and friendly, which is an advantage when you’re a comedian. But I also thought it sounded similar to my family as well. My family are from Consett in County Durham, so I’d like to sound as close as I can to that. And I think that this voice fits the bill.’

And what are his favourite Geordie phrases to use now?

‘I’ve been saying all the classic Geordie phrases on repeat – “Whey aye man”, “howay the lads” and, of course: “Let’s all gan down to Byker Grove.”’ [The show responsible for introducing Newcastle’s finest Ant and Dec to the British public.]

The BGT winner also now has much more of a singing voice, with CereProc’s deep learning synthesiser able to reproduce the expression, timbre and other characteristics associated with singing.

Ridley explains: ‘I’ve already tried to ’sing’ in quite a few of my previous tour shows. For example, I did a great version of Right Said Fred’s I’m Too Sexy during my last tour. Now it just means I can sing slightly better!’

And the song he’ll be making his go-to karaoke choice?

‘It’d have to be Gazza’s version of Fog On The Tyne!’

Fans will be curious to know what’s going to happen to the star’s instantly recognisable ‘old’ voice though, and Ridley reveals it won’t necessarily be a case of out with the old and in with the new.

‘I haven’t decided yet. I think I would need to get used to how my Geordie accent sounds first before I make that decision. I’ve had the same voice for most of my life now, so it’s going to be a big change. I would definitely like to use it in my day-to-day life though. Maybe by trying it out this way, it would give me a chance to get used to it.

‘My fans are always asking me when I’m going to get a Geordie accent, so I think they’d be quite pleased if I used it in my routines. I do think that swearing in a posh voice is much funnier though… So it’s going to be a hard choice to make!’

‘I appreciate that these kinds of places are part of what makes the comedy scene great. I just wish more venues were accessible for disabled people. After all, comedy should be for everyone.’

There isn’t any! Congratulations though and best of luck in the future! https://t.co/gfyZCvsfTL

Since March 2020, live performance hasn’t been much on the cards for Ridley, who admitted that his creativity ‘really suffered during the various lockdowns’.

However, he was able to crack on with writing his Radio 4 sitcom Ability, which is something he ‘really enjoyed’.

‘It gave me my creative spark back, and I loved having fun with it again. Hopefully that’ll spur me on to be more creative this year. I just feel lucky that I had a really busy year in 2019, which has helped massively in the last few years. I don’t know what I would have done otherwise.’

The comic has a tour lined up for 2022. ‘My tour show is called Cerebral Lol-sy – and yes, I did take the rest of the week off work after thinking up that!

‘It will look back at my life since I won Britain’s Got Talent, and all the random stuff that’s happened since. For example, I regularly get called “him off The X Factor” by people in the street. Obviously, I have a great singing voice!’

Speaking of BGT, the 2018 champion is looking forward to watching the how when it returns to our screens next year, after a year of absence due to the pandemic.

‘Going on my past experience of being on the show, I just don’t think it would have been possible [to do in 2021] with all the various restrictions in place.’

Before he goes, it’s only right to quiz him on a return to BGT and whether he’d ever accept a role on the judging panel, like fellow funny men Michael McIntyre and David Walliams.

‘Part of me would love to be a judge on BGT but I’m not sure whether I could do the role justice. I just don’t think I’d have the heart to tell someone that they’re rubbish, so I’d probably end up letting everyone through to the next stage!’

Christmas Comedy Club with Lost Voice Guy airs at 10:30pm on ITV on December 24 and is also available to watch on ITV Hub.