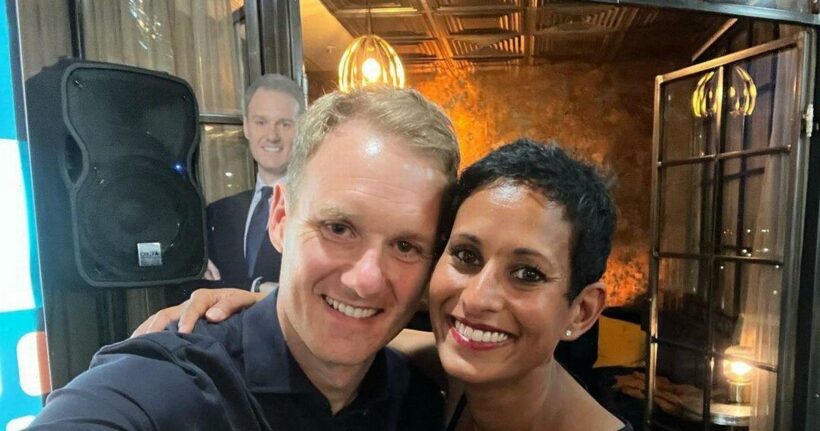 After a star-studded "leaving do" on Wednesday, Dan took to Instagram to share some adorable snaps from his last evening with the broadcasting giant.

In one image, Dan treated fans to a sweet and happy snap of himself arm-in-arm with Naga as they both smiled away for the selfie while looking glam.

Dan wore a black button-down shirt and his co-star matched him wearing a scoop neck and sleeveless top.

Sharing a whole compilation of pics from his last evening with colleagues, the new Channel 5 star penned: "What a wonderful evening with friends and family at my leaving do tonight.

"So many surprises and just so much fun being together with so many gorgeous humans.

"Thanks to everyone who came. I will miss you all."

Messages and well wishes flooded in beneath Dan's emotional post after his last appearance on the BBC Breakfast.

Naga was one of Dan's co-stars who jumped on the bandwagon to bid him good luck for the future.

After six years on the BBC Breakfast, Dan finally raised the last curtain during an emotional last show that was filled with heartfelt tributes.

Back in April, Dan announced that he would be leaving the show to pursue an opportunity with Channel 5 that he simply couldn't refuse.

Speaking to his co-host Sally Nugent about his up and coming departure at the time, Dan explained: "I’ve never ever been motivated by money in any job that I’ve ever taken."

He added: "And even though I love BBC Breakfast, everybody that works on the show, this is a fantastic opportunity to work with a brilliant team at Channel 5 and also go and make some other programmes outside of news."