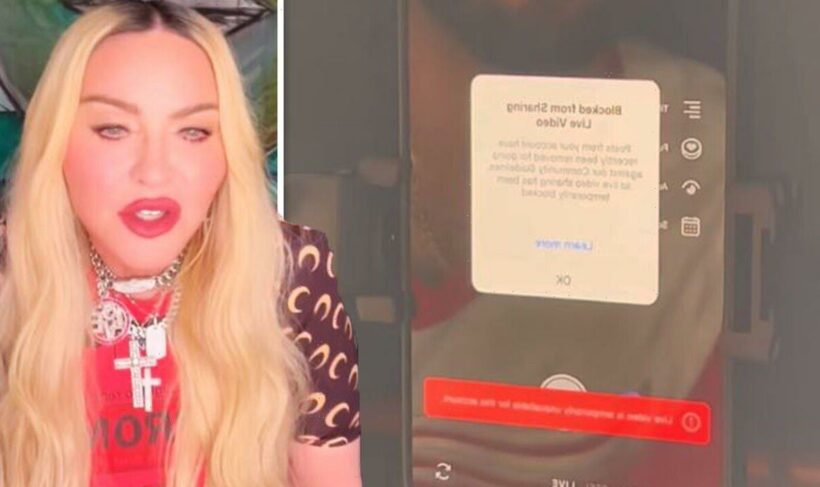 Madonna was left fuming at Instagram earlier today after discovering the social media platform has blocked her from sharing live videos with her fans. The pop icon, 63, told how she had been left “speechless” after being banned from going live with Canadian musician, Sickick. It comes a week after the star left fans bemused after sharing NFT art which featured a 3D scan of her vagina to the platform, as she appeared nude in the clips.

The Like a Virgin hitmaker captured the moment she and her team discovered they had been censored by the social media platform.

In a clip, a member of Madge’s crew said: “Ok, we’re going live.

“What the f**k,” another person said as a warning popped up, which read “Blocked from sharing live video.”

“What’s happening?” someone could be heard asking.

Reading through the reasons why, Madonna told how she couldn’t understand why she’d been censored from going live.

A member of her team said: “Wait, this is the best part, ‘We want Instagram to continue to be an authentic and safe place for inspiration and expression.'”

She captioned the clip: “Not Us!!!! violation community guidelines…”

The star then took to her stories to discuss the ban with musician Sickick, who she had been due to go live with.

Madonna said to him: “I don’t know, it’s weird, we just tried to go live and Instagram blocked me but they’re being really mysterious about why.

“I don’t know why, they’re not giving me a reason, it’s like a bureaucracy inside of a computer.

“It’s really weird, I haven’t done anything lately,” she added.

Madonna insisted: “I haven’t done anything crazy, not this week anyways.

“I mean, it may have been a delayed reaction to my NFTs from last week, but I’m not really sure,” she theorised.

The star continued: “But I just want to take this opportunity to say to anybody who’s been waiting for us on live Instagram that we’re not holding things up and I’m sorry to let everybody down.

“I was really looking forward to this,” she added downcast.

Sickick could be heard replying: “I was too, I was too but I’m sure it won’t be like this forever.”

Madonna cut in: “No, it definitely isn’t going to be, I’m going to go back in time

“I pledge allegiance to the censorship people,” she added before ending the call.