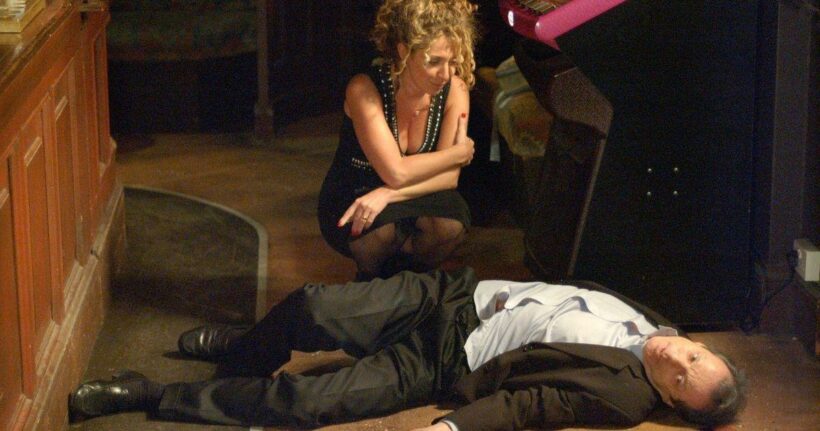 Iconic pubs are the lifeblood of our best-loved soaps. They’re the social hubs where characters work, celebrate, argue, fight, fall in love, cheat, lie, make a scene and drown their sorrows – everything a proper local should be.

Three favourites have stood the test of time for decades now – the Queen Victoria on Albert Square in EastEnders, the Rover’s Return on Coronation Street and The Woolpack in Emmerdale.

We look back at some of the incredible storylines that have unravelled inside and outside their walls, landlords and landladies who have run their bars and some of the dramatic entrances and exits…

This old school East London pub on Albert Square has been at the heart of the community since the very first episode of the soap back in 1985.

It’s been owned and run by a succession of EastEnders landlords and landladies, with the main pub families being the Watts, the Butchers, the Mitchells and the Carters.

Countless major plotlines have played out in its bar and upstairs flat, and a myriad of dark secrets revealed, but it probably wins the soap prize for most killings and violent deaths, on or right next to the premises.

It’s even been burned down in one of the most spectacular week-long plot twists from 2010, when Peggy Mitchell (the late Barbara Windsor) had her cocaine addict son Phil (Steve McFadden) locked in an upstairs room to go cold turkey, but he escaped and torched the place.

Two characters have been murdered inside the Queen Vic and three have died violent deaths directly outside the famous fictional boozer.

Original pub landlord “Dirty” Den Watts (Leslie Grantham) sensationally returned from the dead in 2003 to run the pub again, after 14 years on the run from gangland bosses. His cheating ways finally caught up with him two years later, with lover Zoe Slater (Michelle Ryan) hitting him over the head with a cast iron doorstop, but it was second wife, Chrissie (Tracy-Ann Oberman), who delivered the final fatal blow.

Archie Mitchell (Larry Lamb) made plenty of enemies on Albert Square, all with a solid reason for bumping him off, not least his daughters Ronnie and Roxy. But it was Stacey Slater (Lacey Turner) who killed him by pushing the bust of Queen Victoria off the bar to crash on his head on Christmas Day 2009, in revenge for him raping her.

Short-lived landlord, ex-copper Eddie Royle (Micheal Melia), was stabbed to death in the square gardens by Nick Cotton, having already survived brain surgery after a savage attack by Grant Mitchell.

Tiffany Mitchell (Martine McCutcheon) was mown down accidentally outside the pub by a car driven by Frank Butcher (Mike Reid) in 1998 as she chased after husband Grant (Ross Kemp) who had snatched her daughter, Courtney.

Bradley Branning (Charlie Clements) fell to his death from the roof of the Queen Vic roof in 2010 while being chased by police who thought he had murdered Archie Mitchell.

Bradley’s sister, Abi (Lorna Fitzgerald), suffered a similar fate when she slipped on the pub’s roof tiles while trying to stop her father, Max (Jake Wood) from jumping in another murder storyline full of twists and turns. Sister Lauren also fell, but survived.

At one point the Queen Vic had a rival bar across the square called The Dagmar, run by James Willmott-Brown with Den Watts’ ex-wife, Angie (Anita Dobson), but it didn’t last long. There can only be one pub in Walford.

The Rovers on Coronation Street started off with three rooms, so while there was a rumpus going on in the public bar, those in the snug or “select” function room could rise above it… or earwig without being seen.

The snobby Annie Walker set the bar high for landlords and ladies to follow back in the 1960s and 70s, ably assisted by popular barmaids Bet Lynch (Julie Goodyear) and Betty Turpin, before retiring in 1983 and handing the keys to debt-ridden son Billy, who soon ducked out.

Since then the catalogue of memorable licensees at the Greater Manchester watering hole has included Bet and husband Alec Gilroy, Jack and Vera Duckworth, Fred Elliott, Steve and Liz McDonald, Stella and Gloria Price, Peter Barlow and Toyah Battersby, and Johnny and Jenny Connor.

The first on-screen death at the Rovers was when Martha Longhurst keeled over with a heart attack while sitting in the snug (where drinks were cheaper) with iconic gossiping pals Ena Sharples and Minnie Caldwell in 1964.

The Weatherfield local has endured a fair amount of damage. A car was deliberately driven into the doors in 1974, but worse was to come when a lorry piled into the pub five years later. Piles of timber went crashing into the pub and everyone thought little Tracey Barlow was buried underneath it in her pushchair. Luckily someone had moved it just in time.

The Rovers trumps the Queen Vic on the catastrophic blaze front – it has burned down twice. It was gutted in 1986, when pot man Jack Duckworth went into the cellar to check an electrical fault and set the whole place on fire. The pub was rebuilt with just one bar.

The next fire, in 2013, was even more devastating, with ne'er-do-well former footballer Karl Munro (John Michie) starting a fire deliberately to destroy the pub, but also killing Sunita Alahan and Toni Griffiths.

Original character Ray Langton (Neville Buswell) reappeared on the street in 2005 suffering from terminal cancer to reunite with his estranged daughter, Tracy, but ended up breathing his last in the Rovers at the wedding reception of Ken Barlow and his ex-wife Deidre.

At least two babies have unexpectedly entered the world inside the Rovers – Violet Wilson’s son Dylan in 2008 and Kirsty Soames’ daughter, Ruby Dobbs, in 2012.

The Rovers’ one murder happened on Christmas Day 2019 when Derek Milligan (Craige Els) stormed into the pub armed with a shotgun and held everyone hostage. A bullet hit Robert Preston as he came through the doors and he died in hospital later.

Last, but by no means least of the trio, The Woolpack at Emmerdale, in the heart of the Yorkshire Dales, has been the scene of many juicy dramas in its time.

Its chief roster of on-screen landlords started with odd couple Amos Brearly and Henry Wilks behind the bar until 1991, followed by Alan Turner (Richard Thorp), longest-serving landlady Diane Sugden (Elizabeth Estensen) – from 1999 to 2016, and then mostly the Dingle family.

Amos and Henry were held at gunpoint and locked in the cellar, back in 1978, by teen robbers Steve Hawker and Pip Coulter, who wanted cash to run away together.

Two years after they handed over the reins to Alan, a wine bar was opened in the old tap room, but it was quickly destroyed when a plane crashed on the village, with debris causing an explosion at the Woolpack and paralysing Chris Tate from the waist down.

Every soap pub must burn down at some point and the Woolpack’s turn came in 1998 when Alan’s granddaughter Tricia Stokes accidentally set the building alight with a firework while he was on holiday and it had to be rebuilt.

There was more tragedy to come on New Year’s Eve 2003 when lightning struck the pub during a raging storm. The roof caved in and a window collapsed onto Tricia Dingle and she died in hospital shortly after.

The Woolpack Siege in 2013 was one of the soap’s most dramatic highlights with murderer Cameron Murray (Dominic Power) – he’d bumped off Carl King, Alex Moss and Genesis Walker – taking hostages and shooting Alicia in the stomach. Cameron was electrocuted and killed in the flooded cellar of the pub.

Two years later Chas Dingle (Lucy Pargeter) suffered a mental breakdown and stabbed a tipsy Diane at the pub, thinking she was her stalker. Then in 2019 Donny Cairn knifed Vanessa Woodfield and left her for dead when she caught him trying to torch the Woolpack.

The poor pub didn’t escape destruction for too long. At Christmas 2021 co-owner Al Chapman (Michael Wildman), ex-husband of Jessie Dingle, was looking for a way out of a dodgy financial deal. He put a whisk in the microwave and blew the place up in an explosion that seriously injured Meena Jutla and Manpreet Sharma.

For all the latest soap news and spoilers, sign up for the OK! daily newsletter.