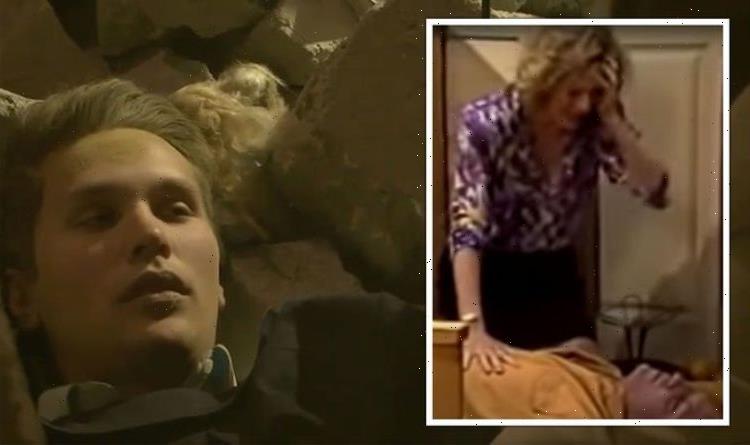 For a small cut de sac in rural Australia, the Neighbours neighbourhood has a startling death rate. Over the last nearly 40 years, dozens of people have met their grisly end on the show in a variety of ways, from murder to death by old age. Express.co.uk has picked out six of the most heartbreaking during the series’ lifespan.

The honour of the first on-screen death fell to Dan Fielding.

Although Dan had a minor single-episode role in the series, his death was notably heartbreaking.

He died of a heart attack one day before his 60th birthday in a touching scene on a hospital bed with his wife Linda.

His death came just over three months after the show’s March 1985 launch, and was the first of four during its debut year.

Jim debuted with the rest of the main cast, among them his children Paul, Scott and Lucy on the first episode.

He became the second character to die from a heart attack following Dan Fielding, following a heartbreaking scene with his granddaughter Hannah Martin.

Surprised viewers watched him clutch his chest while playing in the garden with his young granddaughter, before he ultimately died on his floor near series villain Fiona Hartman.

He would later appear as an apparition in later episodes, notably as a ghost in the 2018 Christmas episode.

One death that will have stayed with most Neighbours fans is that of Helen Daniels, another original cast member.

The show’s matriarch died in 1997, but her departure from the show was doubly devastating.

Showrunners wrote her out due to her actress, Anne Haddy, who had her screen time cut significantly due to persistent ill health.

Anne died at her home in Melbourne after suffering from a “kidney related illness”.

The wedding of Dee Bliss and Toadie in 2003 was supposed to be a happy occasion for the Neighbours crew.

But when the Toadie loses control of the newlyweds’ car and they plunge into the sea just hours after the ceremony, his whole world falls apart in front of his eyes.

Diving down to the sinking car repeatedly, he frantically screams her name as he scrambles to save his blushing bride.

Unfortunately, she never resurfaced – well, at least not until her triumphant return in 2019 in a bizarre plot, some 15 years after it was presumed she’d died on her wedding day.

Longtime Neighbours fan favourite Harold Bishop had a gentle presence during his numerous appearances on the series between 1997 and 2015.

But during a particularly dramatic patch for the show in 2005, writers ripped his family apart.

David, Liljana and Serena Bishop, his son, daughter in law and granddaughter, were killed in a plane crash that year.

Noble characters are a rare presence on most soap operas, and Neighbours’ most selfless resident was Josh Willis.

The son of Brad and Terese Willis first appeared in 2013 and died three years later in 2016.

His death was amongst the show’s most dramatic and followed another explosion that pinned him under rubble from a collapsed building.

Karl Kennedy concluded that he could only save Daniel Robinson by removing a pillar that pinned him to the ground.

Josh offered his life in exchange for Daniel’s, providing a powerful moment as he bid a tearful farewell to his young daughter.