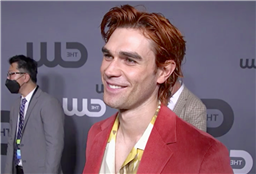 Riverdale is ending after seven seasons… and star KJ Apa is already getting emotional about it.

“I was a little sad,” he tells TVLine about Thursday’s announcement that his CW drama’s upcoming seventh season will be its last. “I try not to think about it, because the more I think about it, the more real it becomes.” But “I think a lot of us saw it coming, [Season] 7 most probably being the final season,” he notes. “So it didn’t come as too much of a surprise to me.”

This season, Apa’s character Archie has found himself with mysterious new powers of super strength and invulnerability, which will help him in his battle with new nemesis Percival Pickens. “I’m hoping that it comes down to him and me fighting,” Apa says of the gang’s final showdown with Percival. “But I think it becomes a little more intricate than just a physical battle… There’s a lot of dark magic. He’s got powers, we’ve got powers. So it’s very Harry Potter meets Stranger Things.” (OK yeah, we’ll tune in for that.)

Archie has also been happily coupled up with Betty this season… but Betty’s ex (and Archie’s BFF) Jughead was just reminiscing about his time with Betty in last week’s episode. Could Jughead try to win her back? “I wouldn’t be worried about that,” Apa says with a confident shrug. “I don’t think that’s gonna happen.”

Riverdale‘s annual musical episode is coming up, too, which will tackle the musical version of American Psycho. Apa reveals that he’s not actually in the episode much, but he hints that costar Casey Cott, who plays Kevin, “kills it in the musical.” He adds that Camila Mendes (Veronica) “of course, as always” and his other female costars “are crushing it” in the musical episode. “But unfortunately, I won’t be making too much of an appearance.” (With reporting by Andy Swift)

Press PLAY above to hear Apa’s thoughts, and then tell us in the comments, Riverdale fans: What do you want to see in the rest of Season 6 and in the final season to come?