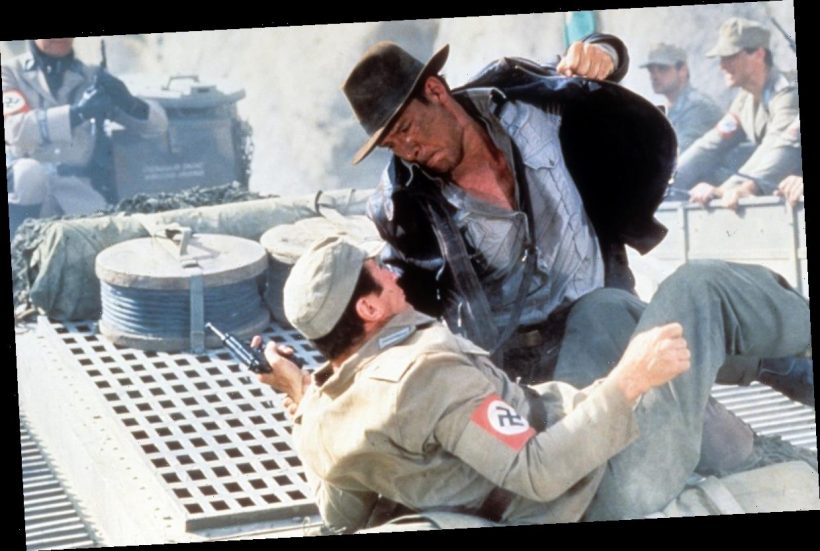 Steven Spielberg‘s career has been filled with great films and profitable blockbusters. Of the many successes he’s had, one franchise that stands out is the Indiana Jones series. Spielberg directed the first four Indiana Jones movies, and all were box office hits. While Spielberg won’t direct the fifth installment of the series, he surely has plenty of memories from the first four, including Indiana Jones and the Last Crusade.

There’s one scene in the film that involved a Nazi rally. Here’s how Spielberg was able to “double-cross” the Nazis and allow the extras to portray them without feeling too guilty.

By the time the Indiana Jones franchise came around, Spielberg was already an established director. Jaws firmly entrenched the visionary director as a major player in the world of cinema. Within a few years, he became the director of Raiders of the Lost Ark. It starred Harrison Ford as archaeologist and professor Henry “Indiana” Jones. The film was executive produced by George Lucas and was a throwback to the serials of the 1950s.

Last Crusade put legendary actor Sean Connery alongside Ford as Jones’ father. It featured the father and son traveling across Europe in search of the famed Holy Grail with one of history’s most dastardly groups on their tail.

Who were the major villains of the Indiana Jones series?

Each film in the Indiana Jones franchise features a different villain, but one group that continually pops up as a recurring foe for Dr. Jones is the Nazis. It is the Nazis who are hunting the Ark of the Covenant in the first film. They’re also hunting the Holy Grail in Last Crusade. The Nazis act as the perfect foil for Jones. While he pursues historical artifacts to put them on display for humanity to witness, they seek them out to control humanity.

The Independent compiled five things the film series got right, and one of those was Jones’ rivalry with the Nazis. In their conquest for proving the superiority of the Aryan race, Nazis often attempted to use archaeological artifacts as a way to justify their point of view. That’s what makes the tension of the films so strong. Jones and his friends are racing against one of the most powerful, nefarious forces in the world. The fate of the planet hangs in the balance.

While the Nazis are always portrayed as villains, depicting them was a complicated prospect for Spielberg. It meant asking actors and extras to become these despicable figures from history, which wasn’t easy. Luckily, Spielberg had a trick that helped them get through the ordeal.

How Spielberg ‘double-crossed’ the Nazis

One scene in Last Crusade features the Jones duo infiltrating a Nazi book-burning rally. This meant the production needed hundreds of Nazi uniforms. According to Goliath, costume designer Anthony Powell was able to find authentic World War II Nazi uniforms in Germany that the extras wore.

The same scene also required the extras to perform a Nazi salute. In order for them to do it guilt-free, he asked all of them to put their free hand behind their backs and cross their fingers while doing it. It was a way to soften the blow of having to make such a polarizing gesture that symbolized pure evil.