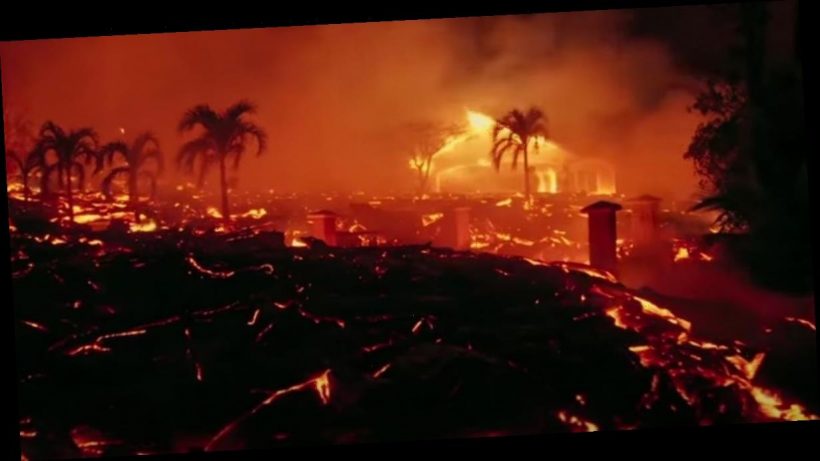 An incredible video shows Hawaii's Kīlauea volcano spitting out red-hot lava and molten rock as it erupts with ferociousness.

The incredible footage, from BBC One's A Perfect Planet airing tonight at 8pm, shows a dazzling fire-show as torrents of molten metal fill the screen.

Sir David Attenborough, who is narrating the new documentary, explains: "Here magma, liquid rock from the planet's hot interior, bursts out through fractures in the Earth's crust.

"And it's been flowing for months."

Filmed from above, the landscape is blackened and charred, a house is being burned to a crisp, and palm trees are dying in a sea of magma.

"Nothing can stand in the lava's way," Sir David says.

"Volcanoes are certainly destructive but without these powerful underground forces, there would be no breathable atmosphere."

The video was uploaded as a sneak preview of tonight's show on the YouTube channel BBC Earth, where it has since been watched more than 100,000 times and been showered with comments.

"Sir David has the most compelling voice on the internet," gushed one fan.

A second admirer wrote: "One of Earth's most dangerous and destructive phenomenon is also one of the MOST BEAUTIFUL!"

Someone else mused: "Nature is so beautiful but scary…"

Another viewer commented: "We cannot wait for the show!"

Kīlauea is the world's most active volcano and erupted on December 20 last year, giving rise to amazing images but also causing severe damage.

Season one, episode one of A Perfect Planet is airing tonight, January 3, on BBC One at 8pm