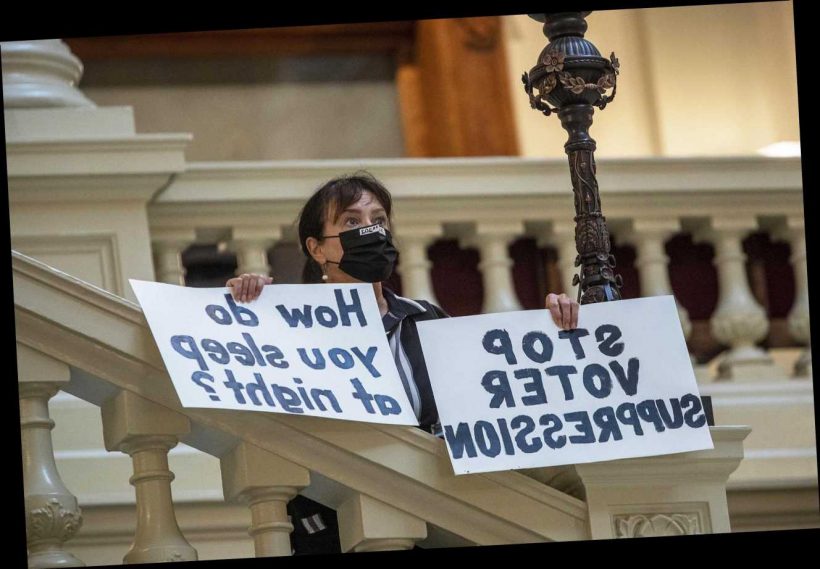 The Georgia Legislature has a message for corporations working in the Peach State: Fight too hard against the new voting law, and you might lose your subsidies and tax credits. The Georgia House sent it loud and clear Wednesday, the last day of its legislative session, when the Republican controlled body passed a bill to repeal a jet-fuel tax break worth tens of millions. The move was a swift response to Delta Air Lines CEO Ed Bastian, who that same day derided the law as “unacceptable” in a memo to employees.

Though the Senate did not pass the bill, the threat remains. While Delta, Coca-Cola, and other major Georgia businesses have spoken out, Hollywood’s response has been much more muted. Studios were among the beneficiaries of $870 million in Georgia film and TV tax credits in 2019, a program that has supported hundreds of productions including “Avengers: Endgame.”

“These corporations, they’re cross-pressured,” Trey Hood, a professor of political science at the University of Georgia, told IndieWire. “You’ve got pressure from the left on the consumer side of things. The legislature has created a very business friendly environment, so how much do you want to poke the bear, so to speak. They probably feel caught in the middle.”

It’s now been a full week since Georgia Gov. Brian Kemp signed an elections bill into law that restricts voting access, one that critics say will disenfranchise voters of color.

“We are all frustrated with these companies that claim that they are standing with the Black community around racial justice and racial equality,” LaTosha Brown, a co-founder of Black Voters Matter, told the New York Times Monday. “This shows that they lack a real commitment to racial equity. They are complicit in their silence.”

Four days later, corporate pushback is only beginning to trickle in — and it’s muted at best.

ViacomCBS tweeted a statement Wednesday indicating its opposition to the Georgia voting law. But rather than fight the government on the law, the company wrote it would “continue to educate the public on the importance of an open and fair voting system” through its programming and partnerships with grassroots voting-rights organizations. It did not name specifics.

WarnerMedia, which is owned by AT&T, said its corporate parent was working with local chambers of commerce to promote “accessible and secure voting,” according to the New York Times.

Apple CEO Tim Cook in a Thursday statement indirectly spoke out against the law, writing that Black people have “had to march, struggle and even give their lives for more than a century to defend” their right to vote.

It’s a sharp contrast to the kind of displays that corporations indulged in last year following the worldwide response to George Floyd’s death, among other issues. Disney, for example, aired a Black Lives Matter PSA on the Disney Channel and pledged $5 million to organizations like the NAACP. Earlier this year, it took Disney’s Lucasfilm less than 24 hours to fire “The Mandalorian” actress Gina Carano after she shared a post on Instagram comparing the plight of conservatives like her to Jews living under Nazi rule.

But when it comes to fighting for Black voting rights, Disney has remained silent. A representative for the company did not return a request for comment about whether it planned to respond to the law.

Of course, the source of the resistance all comes down to money. If there’s any doubt that the Georgia House’s action on jet fuel was anything less than retaliation against Delta stepping out of line, here’s what House Speaker David Ralston said Thursday, according to Georgia Public Broadcasting: “They like our public policy when we’re doing things that benefit them, and they reap the rewards of those benefits and then turn around and do this … As all of you know, I can’t resist a country boy line or two, you don’t feed a dog that bites your hand. You’ve got to keep that in mind.”

Hollywood deeply understands that “country boy line.” Georgia’s film and TV tax credit program is among the most generous in the nation. In the 13 years since the program was introduced, Georgia has grown into a full-fledged “Hollywood of the South.” It was the third most popular filming location after California and New York in 2018, according to FilmLA.

The reaction to the election law has parallels to that of the 2019 Georgia heartbeat bill, an abortion-restriction bill that was ruled unconstitutional by a federal judge last year.

The passage of that law saw creatives leading the opposition, while studios took a wait-and-see approach. A few weeks after the abortion bill was signed into law, Disney’s then-CEO Bob Iger said it would be “very difficult” to continue filming in Georgia if the law took effect. That came well after 100 prominent Hollywood players struck a much more aggressive tone when they signed a letter threatening to boycott the state.

Hollywood is once again slowly wading into a controversy in the hopes that something like a court order will make the problem go away before executives need to speak with stronger words.

Tyler Perry, a prolific producer of Georgia-based projects, spoke out against the law in a statement. But he cautioned against a knee-jerk reaction to completely boycott the state, something that director James Mangold has called for.

“I’m resting my hope in the DOJ taking a hard look at this unconstitutional voter suppression law that harkens to the Jim Crow era,” Perry said. “As some consider boycotting, please remember that we did turn Georgia blue and there is a gubernatorial race on the horizon — that’s the beauty of a democracy.”

But observers, including Hood, expect this law to have a stronger chance at withstanding a court challenge. That means that as this saga unfolds, media companies are likely to face a major test of their ability to match their actions to their words.