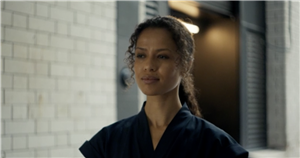 The Girl Before fans were left "confused" after they'd tuned in for Monday's second episode of the thrilling drama adaption by JP Delaney.

BBC viewers fumed that they were left "infuriated" over the confusing plot as the drama flip flopped between the past and present.

It wasn't just the transformation in time that became "difficult" to understand but the fact the two girls for both roles looked so similar that it became "complicated".

In the psychological thriller, it's made clear Edward has a 'type' of woman he wants to fill his home, as their two plots appeared to converge at certain points with eerie similarities.

Taking to Twitter masses complained that they were "struggling to work out what was going on".

One online user moaned: "Did one woman just morph into the other? This is confusing! #TheGirlBefore."

Another agreed: "#TheGirlBefore It’s a bit difficult to keep up with who is who as both the ladies look so much alike."

A third grumbled: "I cannot work out what is going on here and it’s infuriating #TheGirlBefore."

While a fourth said: "This is getting really weird. With the girls being transposed and all #TheGirlBefore."

Viewers are introduced to Jane, played by Loki actress Gugu Mbatha-Raw and actor David Oyelowo who plays the mysterious architect Edward – who designed the stunning and creepy modern house that she now lives in.

Former Eastenders star Jessica Plummer plays the former tenant Emma – who died in the house three years before Jane had moved in.

At the end of episode one, Jane began dating Edward – much like Emma had three years before – but later falls pregnant with his baby.

In tonight's episode, it was revealed that Jane then suffered a tragic miscarriage.

As the story unravels, it becomes apparent to Jane that she and Emma, Edward's ex wife actually have more in common than they'd thought.

The programme finished on a cliff hanger as Emma's old therapist warns Jane that she is "dating the same man and in danger".

The Girl Before continues on BBC One tomorrow at 9pm.