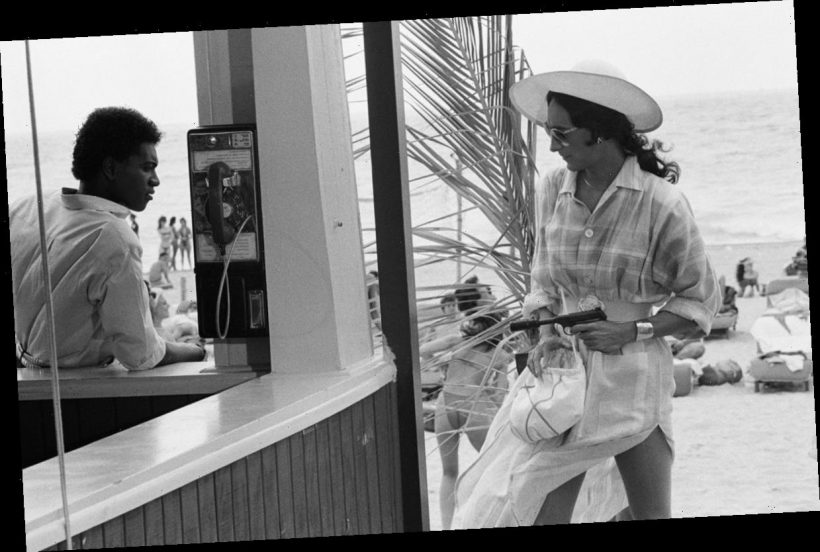 You can die on TV and come back to life as another character on the same show. All you need is a slightly different look. Dan Grimaldi did it as Philly and Patsy Parisi (twins!) on The Sopranos. Earlier in TV history, Miami Vice waved the magic wand after killing off Trini De Soto in the 1984 pilot.

If you recall “Brother’s Keeper,” the opening installment of Miami Vice, the story follows Ricardo Tubbs (Philip Michael Thomas) to South Florida, where he searches for drug lord Calderone. While on his trail, Tubbs and Det. Sonny Crockett (Don Johnson) witness a would-be informant shot dead.

The assassin, wearing a dress and sporting long hair and makeup, appears to be a woman. Later, we find out it’s De Soto, disguised as a woman, who did the hit. But that isn’t the end of Martin Ferrero, whose De Soto died in “Brother’s Keeper.” Ferrero had a long run in another Miami Vice role.

In an episode chockful of colorful characters, Trini De Soto stands out. The audience firsts hear about him from Crockett (Johnson), who describes De Soto’s voice as “a little on the festive side, a cross between Tito Puente and Carol Channing.”

Next up comes a lunch scene featuring Crockett, Tubbs, and De Soto himself. Ferrero (De Soto) absolutely steals it from the show’s stars. Between mouthfuls of food and mentions of “Marielito riff-raff,” De Soto rhapsodizes about “the Golden Age of TV,” which helped him with his English.

De Soto has one slight beef, though. “Forget about Desi Arnaz, man,” he tells Tubbs. “The fact that dude never copped an Academy Award says something very deep about the American psyche.” If De Soto hadn’t already won over fans, he sings a bit at a later meeting with Crockett and Tubbs.

It’s easy to imagine Michael Mann and his team scrambling for ways to bring back Ferrero in some capacity after NBC ordered the first season of Miami Vice. Sure, Tubbs kills De Soto (in drag) later in the pilot, but that didn’t exempt Ferrero from being a part of TV magic.

Ferrero didn’t bounce back right away on Miami Vice. Producers held him off for six episodes after the pilot. But he was back in action by “The Great McCarthy” (season 1 episode 8). This time, he began playing the role of Izzy Moreno, the bespectacled informant.

Crockett and Tubbs pick up Izzy (Ferrero) in the aftermath of a bank heist. His career as an informant begins there, and he turns up for a total of 22 episodes as the character. Whether he’s got a gig as a go-go dancer or is dealing with Phil Collins (as Phil Mayhew), Izzy always finds a way.

Outside of the main cast, Ferrero ended up as the only performer on Miami Vice to appear in episodes in each of the show’s five seasons. And Ferrero’s run didn’t end until the very end. He appears in “Freefall,” the planned series finale, as well as two episodes that NBC later ran from season 5.