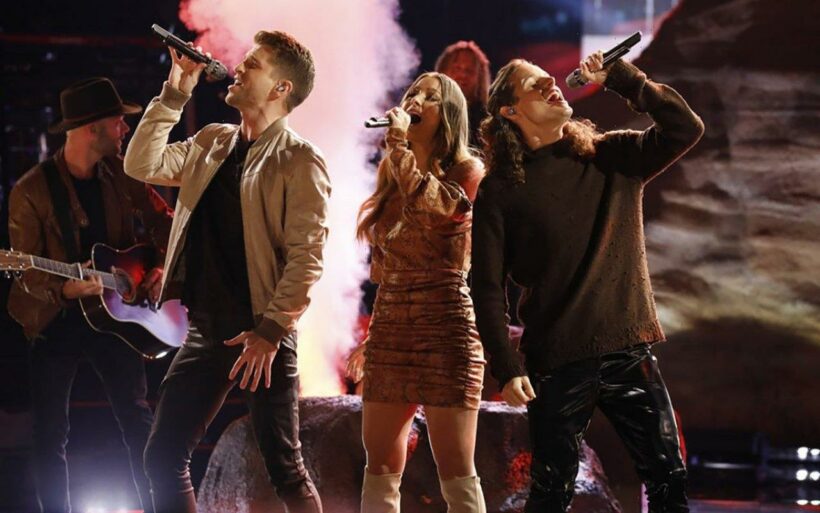 AceShowbiz -The Top 5 of “The Voice” season 21 took the stage for the last time in the finale which aired on Monday, December 13. In the episode, Paris Winningham and Wendy Moten from Team Blake Shelton, Girl Named Tom and Hailey Mia from Team Kelly Clarkson, and Jershika Maple from Team John Legend performed for the win.

Kicking off the night was Hailey Mia, singing “Deja Vu” by Olivia Rodrigo. Coach Ariana Grande, who had no singers left in the finale, praised Hailey as she said that this was a great direction for Hailey to go as an artist. As for John, he was impressed by Hailey’s control and demeanor.

Following it up was Paris Cunningham who performed “Me and Mrs. Jones” by Billy Paul. Paris revealed that he dedicated the song for his father, whom he called his #1 inspiration. Blake gushed over Paris, saying that Paris just raked in millions of votes and sold millions of tickets for concerts that weren’t even booked yet.

Performing “The Chain” by Fleetwood Mac was sibling trio Girl Named Tom. As they showed off their signaure harmonies, Kelly called their performance “perfect.” Later, Jershika Maple hit the stage to sing “I’m Goin’ Down” by Mary J. Blige which was dedicated to her church community. Kelly called herself an idiot for letting Jershika go earlier this season, while John loved that Jershika was “powerful” and “soulful.”

Wendy Moten then sang “How Will I Know” by Whitney Houston. Ariana loved it, calling Wendy an insane vocalist and saying that she’s remarkable. Meanwhile, the performance renderred Blake speechless.

Hailey Mia later returned to the stage to sing “idontwannabeyouanymore” by Billie Eilish, which was dedicated to all the little girls and boys watching tonight. Paris Winningham from Team Blake followed it up with a performance of “Ain’t Nobody” by Chaka Khan. Kelly loved Paris’ perfect balance of power and strength, while Blake believed that Paris deserved to win “The Voice”.

Girl Named Tom opted to sing “Baby, Now That I’ve Found You” by The Foundations which they dedicated to each other. Ariana called them stunning and Kelly dubbed it a flawless performance. Singing “Rolling in the Deep” by Adele for her last performance was Jershika Maple, while Wendy Moten chose to sing “Somewhere Over the Rainbow” by Patti LaBelle that she dedicated to her two home towns of Memphis and Nashville.

Winner of “The Voice” season 21 will be announced on Tuesday, December 14 episode.