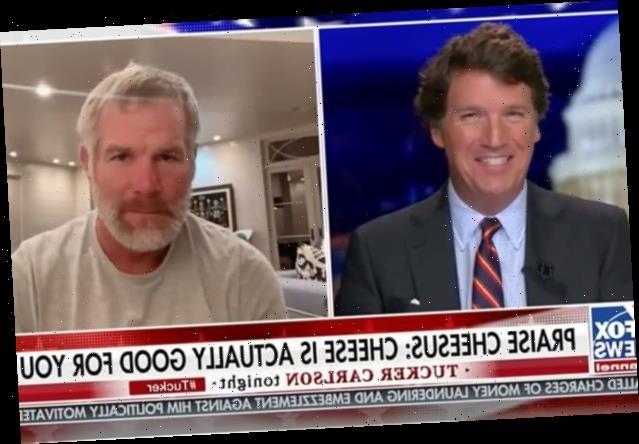 There’s so much going on in the political world right now, but Tucker talked about cheese instead of real topics Tuesday night

Tucker Carlson may not be a credible news source, as a judge ruled last year, but he certainly does have some thoughts about cheese that he felt his audience needed to hear. Tucker had none other than former Minnesota Vikings quarterback Brett Favre on his Fox News on Tuesday night to discuss “the wonders of cheese.”

“We’re learning more every year about how little our health authorities actually knew when they told us what to eat and drink. Here’s another example. New research from Iowa State University recommends daily consumption of red wine, weekly consumption of lamb. But here’s the headline. The research shows that cheese — fromage, queso — is quote by far the most protective food against age-related cognitive problems even late into life,” Tucker said to open the segment.

Despite his framing, this not actually a topical discussion, because the study Tucker is referencing was released in December. But apparently he thought it was a more important topic than the COVID-19 pandemic or the new relief bill, neither of which he discussed on Tuesday night.

“As a kind of public service announcement, we’ve crafted a new advertisement spreading the good news about cheese,” Tucker went on before presenting a pun-filled fake commercial that featured lines like:

“Are you feta up with strict and string-gent diets that don’t give you parmesan to eat cheese?”

Then Carlson brought in Favre, who he described as a “world-renowned cheesehead,” for a chat that had even less substance than you would expect.

“Brett, we’re so grateful that you’re on the show to talk about cheese. Did this surprise you?” Tucker asked.

“Nothing in today’s world surprises me anymore,” Favre replied.

“Good answer! I feel that same way!” Tucker shrieked. “So you’re obviously famously fit. We’re the same age, I think we’re almost exactly the same age, you’re in a lot better shape than I am. How much more cheese do you eat than the average person, would you estimate?”

But it turned out that Favre is perhaps not actually that much of a cheesehead after all.

“I’m gonna say I eat under the average. I love cream cheese and pepper jelly. I love goat cheese. I love pepper jack. But I don’t know if I eat as much as the average Joe. I may be wrong but that’s just my observation,” Favre said.

“I love cheese, though.”

“For me, cream cheese is — it’s so versatile — is number one. And pepper jack would be two, and then goat cheese, which I kind of lump in with cream cheese, but I’m certainly a cream cheese type of guy,” Favre said.

“I notice a theme here, if I can just sort of put an overlay for our viewers,” Tucker replied. “All the cheeses that you mentioned are on the softer end. You’re not — parmesan wasn’t even on the list. Is there a reason you like the softer cheeses?”

“You know, I kind of like the texture more than anything, yeah. The goat cheese and the cream cheese have that different texture.”

And with that, this banal cheese segment came to a merciful end.

You can watch a clip of this nonsense from Tuesday’s episode of “Tucker Carlson Tonight” in the video up at the top of this article.