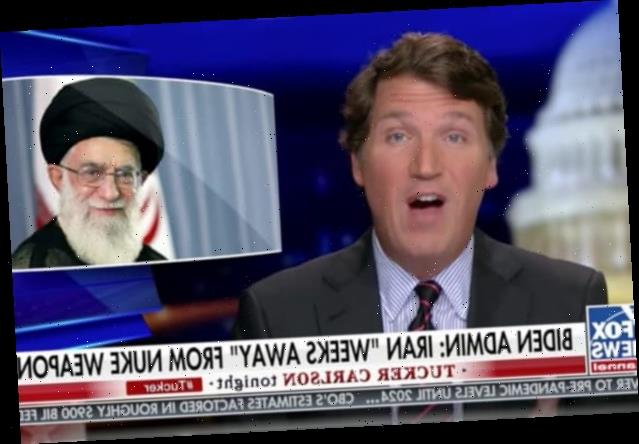 Tucker Carlson has been increasingly unhinged since Donald Trump left office — after spending four years propping up Donald Trump, Tucker is once again fully on the attack. On Monday, the Fox News guy got weird when he claimed that Joe Biden is trying to start a war with Iran, and promoted an evidence-free conspiracy theory that Biden is escalating the U.S. military’s presence in Syria.

“Just a few hours ago, Biden officials informed us that after almost 65 years of working to build a nuclear weapon, the nation of Iran may be finally — and you’ll find this amazing — quote just weeks away from getting a bomb. After 65 years of trying. What a coincidence,” Tucker said, dishonestly omitting the key detail that Iran restarted its nuclear program because Donald Trump pulled out of the Iran nuclear deal.

“You already know how that story’s gonna end: another pointless war, trillions spent, many dead, the United States gaining nothing. We’ve seen that a lot, and it’s happening again.”

There’s no evidence for this claim at all, since Biden is actively attempting to get the nuclear accord with Iran going again, which would once more put the kibosh on Iran’s nuclear program — which Iran actually wants. Tucker is likely trying to draw parallels to the run-up to the war in Iraq, which was a Republican initiative that Tucker supported, but those parallels do not actually exist.

Tucker’s attempts to mislead his audience on this topic continued when he shared a factually incorrect conspiracy theory about Biden sending a new wave of troops into Syria, which is not true.

“Joe Biden just sent American troops to Syria. What, you didn’t know that? Yep. Hours after he became president, American soldiers crossed into the nation of Syria. Sending them to Syria was one of the first things Joe Biden did. Somehow most of the media forgot to even mention that,” Tucker whined.

According to the news story that is the source for this conspiracy theory, these troop movements were run-of-the-mill supply runs between Syria and Iraq that the U.S. military regularly performs. The idea that Biden “sent” these troops to Syria, or that these movements represent an escalation, is laughable.

Adding to the comedy, Tucker later tried to defend new congresswoman Marjorie Taylor Greene, who is obsessed with the Qanon conspiracy theory. Carlson vociferously defended her against attempts by some House Democrats to have her expelled from Congress over her far-right rhetoric, which included recent Facebook posts endorsing the murder of congressional Democrats and claims that the Parkland school shooting was a false flag by the left.

“Just how dangerous is this three named congresswoman you probably have never heard of?” Tucker asked, regarding the woman who has been making headlines non-stop for weeks.

“Well, so dangerous, that in the name of democracy, she must be expelled tonight from the Congress. That’s what they’re saying.”

Tucker thinks her violent rhetoric is no big deal.

“CNN says she has bad opinions. Therefore, she’s the greatest threat we face. Now, if you’re skeptical about any of this, our advice is keep it to yourself. Because free inquiry is dead, unauthorized questions are hate speech,” Tucker cried.

A reminder that back in September a judge ruled that Tucker Carlson is not a credible source of news, and that no reasonable viewer would take anything he says seriously.

You can watch the quoted portion of Mondays’ episode of “Tucker Carlson Tonight” in the video embedded up at the top of this article.