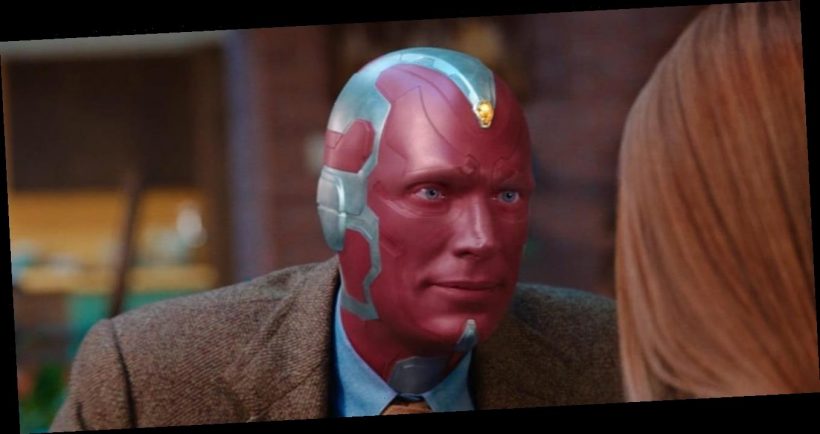 What’s coming up next on WandaVision? Marvel Studios is keeping a tight lid on all things spoilers for the Disney+ TV series about Wanda and Vision’s wedded sitcom bliss, but star Paul Bettany has a few things to tease about upcoming episodes…including a top secret star with whom he’s “always wanted to work with.” But who could it be?

While speaking to the Lights Camera Barstool podcast (via The Playlist), Paul Bettany, who plays the inexplicably revived Vision in WandaVision, teased that “people’s minds are going to explode” once they see episode 4 of the series, which debuts this Friday. Bettany cautiously continued:

“You can expect those two worlds [of the sitcom and the outside world] to… to have more conflict. I don’t want to give away too much about the future episodes, but I will tell you this, there were more special effects requirements for our TV show than there were for Endgame.”

At this point, we’ve already gotten to know most of the neighbors in Westview, the sitcom suburb where Wanda and Vision have settled down in their married life. But what of the mysterious outside world, where S.W.O.R.D. agents appear to be monitoring the sitcom, and beekeepers appear out of sewers? No characters have emerged from that side yet, though perhaps we will meet one soon, per Bettany’s tease about a top secret actor with whom he has some “intense” scenes:

It’s also possible it could be a new character in Westview, though it’s too hard to tell for certain. But who could this be? Time to put on our speculation goggles! Since it’s an actor Bettany hasn’t worked with before, it can’t be anyone from the Marvel Cinematic Universe. Many are speculating that it might be Nathan Fillion, who had been cast as Wonder Man in Guardians of the Galaxy Vol. 2 before the part was cut. But he might be re-upped in WandaVision, especially after several hints had been dropped about the character, including a sign for “Wonder Mints” in the episode 2 credits, and Wonder Man artwork in a featurette.

Regardless, Bettany assures that fans are “going to be massively surprised by the end of the show. I really think people are going to be like, ‘oh my god!’ and they’re going to look at the MCU in a whole new light and also have a much deeper understanding in what direction it’s moving.”