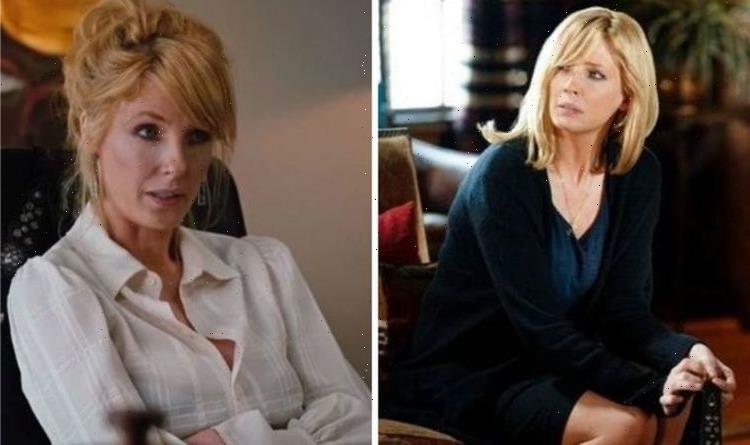 After the jaw-dropping Yellowstone finale saw three members of the Dutton family left for dead, the recently aired premiere left fans relieved after each of them survived. However, one Paramount Network streamer seemed to recall a glaring clue, which hinted at Beth Dutton (played by Kelly Reilly) attacker being her former boss.

Taking to Reddit, user DaBetterILkmyDawg shared the insightful theory: “Something in the way Beth’s former boss looked at her in that little meeting makes me wonder if it wasn’t him.”

Another viewer agreed and wrote: “I think it was Beth’s former boss Bob, I think her attack was done by him anyway – that relationship soured too much, too quickly for me.”

Fans were first introduced to Bob Swartz in season one as a banker, CEO and partner of and one of the partners of Schwartz & Meyer.

As one of America’s biggest banks in Yellowstone, he also employed Beth, who happened to be one of her nest employees.

Although the two appeared to be friends and got along well in the beginning, fans couldn’t help but notice Bob’s sudden disappearance in season three.

However, things went sour when Beth was fired by Willa Hayes (Karen Pittman) after Market Equities became the majority owners of Schwartz & Meyer.

She was met with her expected termination when she found Willa sitting at her desk, which forced her to meet with Bob.

Market Equities was able to become majority owners as they also owned all of the land on the north side of Yellowstone.

Episode two saw Beth meet with Bob and threaten him to “retire before I take everything you fucking have.”

However, he retaliated by bragging about owning the land around Yellowstone, to which Beth smugly responded, “you co-own the land, Bob. You gotta read the fine print.”

As a Dutton, Beth has had to battle corporations who want to buy the Dutton Ranch, however, her father John Dutton (Kevin Costner) has always refused.

He even turned down a $500 million offer to sell his land to Market Equities because the land had been in his family for six generations.

Perhaps Bob knew Beth would have it out for him and seek revenge for selling out to Market Equities, so he wanted to kill her before she got the chance to retaliate.

Fans watched in shock as she was almost killed while packing up her belongings at the office.

Her assistant brought in a mysterious box, which had arrived for Beth and before she could say anything the assistant opened it which detonated a hidden bomb.

The blast was so powerful it even blew out the car windows in the street outside, so it was a pleasant surprise when viewers saw Beth had survived.

Her brother Kayce Dutton (Luke Grimes) and father John, were also victims of a hit in the season three finale.

John was driving home when he pulled over to help a mother whose car had broken down on the side of the street when gunmen began fighting shots at him.

Kayce was forced to hide behind the desk in his office after he was also met with multiple gunmen.

While viewers are pleased with the survival of the Dutton family, it’s yet to be seen if all the attempted murders were linked and if they had anything to do with the highly sought ranch.