The Western Bulldogs will move into a second home at Skinner Reserve in Melbourne’s western suburbs as part of a $3 million partnership with the local council.

Maribyrnong Council on Tuesday night voted to revamp the run-down reserve in Braybrook, allowing the AFL club to use the space for about 12 hours of training a week. 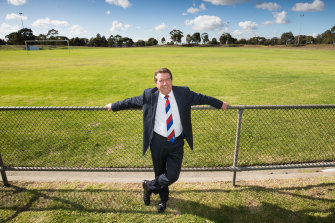 The grass will be upgraded to replicate the oval at Marvel Stadium, and the redevelopment will add fencing, interchange benches, a two-lane running track, lighting, AFL-standard goalposts with protective netting, and improved spectator amenities.

The council and the Western Bulldogs will each pay $1.5 million towards the redevelopment and put $50,000 a year into its maintenance.

Maribyrnong mayor Michael Clarke said an upgrade was well overdue and the partnership allowed for a better revamp than the council could afford on its own.

Consultations found most residents supported teaming up with the football club, which approached the council early last year in need of a second training ground. 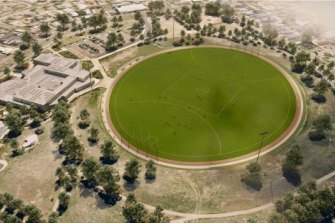 An artist’s impression of the upgraded facility in Melbourne’s western suburbs.Credit:Maribyrnong Council

From the start of the the 2022 season the Doggies will use Skinner Reserve three days a week between 4pm and 8pm, and occasionally for three hours on Saturday and Sunday mornings.

Community sporting clubs will be able to train there two nights a week and compete on the weekend, using the space 20 to 25 hours a week.

The grounds will be open to the broader community the rest of the week, and a community reference group will be established.

Kingsville Cricket Club has agreed in principle to move from Skinner Reserve to Dobson Reserve, which will have its own $3-$4 million upgrade, by September.

Braybrook United and Maribyrnong Greens soccer clubs also use Skinner Reserve and have agreed in principle to the redevelopment.

The grounds will be able to sustain up to 35 hours a week of organised sport, on top of casual use – more than double the 10 to 15 hours it can currently maintain.

Cr Clarke said he expected the Bulldogs to engage with the community and bring a massive social benefit to the disadvantaged area.

“It’s not just an opportunity for the Dogs to train. This has incredibly profound social implications for what has been historically a highly disadvantaged community,” he said. 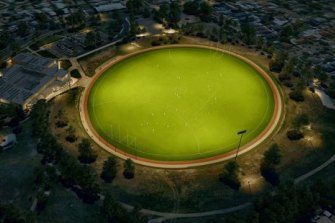 An artist’s impression of the floodlit oval.Credit:Maribyrnong Council

“We’re very clear that this is a huge opportunity and we will look to orchestrate clear community engagement opportunities. It won’t just be, ‘Oh there goes Marcus [Bontempelli].’ ”

The majority of residents who took part in consultations, 34 of 49 respondents, said they supported the Bulldogs using Skinner Reserve.

Those who disapproved were less likely to live in Braybrook, saying the reserve should stay in community hands.

Skinner Reserve has a long football history. Former player Doug Hawkins grew up in Braybrook and played on the grounds.

“That’s what makes it the heart of Braybrook, its history,” Cr Clarke said.

Braybrook’s population is expected to grow by 42.3 per cent to 14,467 by 2041. The suburb has a high number of public housing residents, low-income earners and poor public health, a report by council officers said.

“Officers view this as an opportunity to improve an ageing facility in need of repair, to a high-quality facility available to all community members, in a location that will serve our most disadvantaged community,” a report by council officers said.

Separately, the Bulldogs are upgrading their primary home at Whitten Oval. The state government set aside $36.6 million for the $58 million project in the 2020-21 budget.

Residents were temporarily locked out of Whitten Oval – public land managed by the club – last year while the Bulldogs were at the AFL’s Queensland hub for the COVID-19 impacted season.

Keep up to date with the best AFL coverage in the country. Sign up to receive our newsletter twice-weekly during footy season.