SIXTY. Aaron Judge pushed into truly elite home run territory with his 60th blast Tuesday night, hitting a solo shot to lead off the ninth inning against the Pittsburgh Pirates.

No. 60 ties The Sultan of Swat for 2nd all-time in American League [email protected] 👨‍⚖️ pic.twitter.com/DNwFXsJFMC

The home run brought the Yankees within three after a rough night for the New York bullpen, and the rest of the lineup stepped up after him. Anthony Rizzo, Gleyber Torres and Josh Donaldson reached against Pirates closer Wil Crowe and Giancarlo Stanton followed with a walk-off grand slam.

Judge is now just one deep ball shy of tying fellow New York Yankees slugger Roger Maris' American League record for homers in a season, 61. Judge is just the sixth player in MLB history to crush 60 homers in a season. No one has reached this threshold since Barry Bonds and Sammy Sosa in 2001.

In what could only be a side story for Judge this year, he also took over the American League lead in batting average, putting him in position to win the Triple Crown.

While Barry Bonds, Sammy Sosa and Mark McGwire trounced Maris’ longstanding record in their late '90s, early 2000s slugfests, they all did so in the National League (and under a cloud of performance-enhancing drug suspicion). The Yankees great’s mark, 61, still rules in the AL.

In fact, the top AL home run seasons are mostly held by the likes of Roger Maris, Babe Ruth, Jimmie Foxx and Hank Greenberg. Judge's 2022 is now tied for fourth. Only Maris and Ruth have hit more. Prior to Judge, the closest any modern player had come to beating Maris was Alex Rodriguez’s 57-homer campaign for the 2002 Texas Rangers.

Judge joins Maris and Ruth as the only Yankees to log 60-homer seasons. 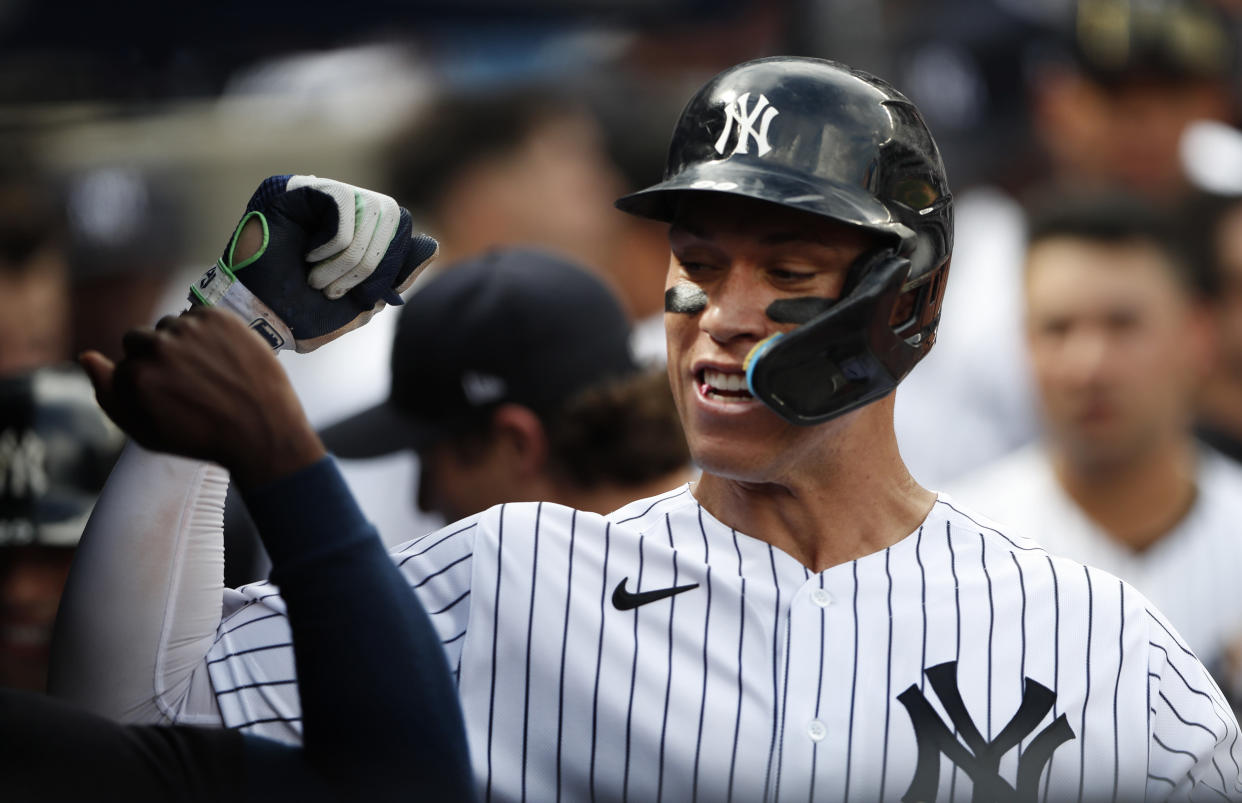 The Maris family was deeply involved in the 1998 home run chase that saw 61 fall for the first time. They were on hand to witness Mark McGwire hit No. 62. When McGwire's use of performance-enhancing drugs was reported, the former Cardinals slugger reportedly called the Maris' widow to apologize.

Kevin Maris, Roger's second son, told New York Magazine that he would be "excited" for Aaron Judge if he eclipses his father's legendary 1961 season. He also waded into the now decades-old argument over whether the home run barrages of Bonds, Sosa and McGwire — allegedly aided by steroids — should be immortalized in the record books.

"I think public opinion says that Dad really has the record," Kevin Maris said. "How can you celebrate people that have been known to cheat the game? It’s not done in any other sport. So I’d have to go with the court of public opinion."

For his part, Judge isn't swayed. He told Sports Illustrated he considers Bonds the single-season home run king. It's worth remembering Judge grew up in Northern California while Bonds was bashing in San Francisco, and was nine years old during the 2001 season.

Judge is suddenly making a run at the Triple Crown. He has long led comfortably in homers (duh) and RBIs. But with Tuesday night's homer, he also moved into the batting average lead — at least temporarily overtaking Luis Arraez and Xander Bogaerts, who started the evening ahead of him.

Obviously, the race for the batting title could go down to the wire, but on the same night he put No. 60 in the seats, he could find himself in line for a Triple Crown. Miguel Cabrera won MLB's last Triple Crown in 2012, breaking a decades-long drought that had stretched since Carl Yastrzemski did it in 1967.

Should you be so inclined, there are several futures bets to be made on Judge’s prodigious MVP and home run total odds but, like with many things in life, you’ll have to spend money to make money. Judge currently sports a -5000 moneyline at BetMGM to win the AL MVP and -400 to hit more than 61.5 homers. So, to potentially win $10 on an MVP bet, you would need to wager $500, while to win $10 on the home run total bet, you would need to put up $40.

The Yankees made what appeared to be a fairly reasonable contract offer before the season started — seven years, $213.5 million that would have begun in 2023. Judge and the Yankees settled on a $19 million salary for 2022 shortly before they were due to go to arbitration. Judge, of course, was always well within his rights to push toward the free agent market. And as it turns out, he made the right decision.

His 2022 has been a roaring success, one of the most glorious contract year wins in recent memory. While the Yankees season as a whole has cooled off recently, Judge is still barreling toward a monster payday. At this point, the homer history doesn’t matter so much as sustaining his overall excellence and avoiding serious injury.

When he hits the market this winter, he could now reasonably command something in the neighborhood of $300 million. The main limiting factor is his age. He’ll turn 31 in April, which puts a cap on the length most teams would be willing to sign up for.

Beyond the Yankees, his potential suitors could include the San Francisco Giants, Los Angeles Dodgers, New York Mets and Boston Red Sox.