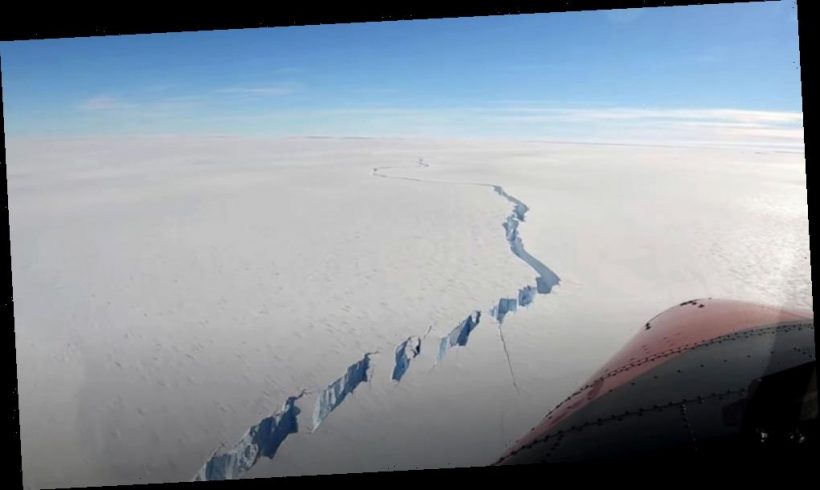 An iceberg larger than New York City has broken off an ice shelf in Antarctica, scientists say.

Glaciologists have been expecting a large calving event for at least a decade, according to BAS. The first indication that the glacier would break off was in November, when a new chasm named the North Rift — the third major crack to become active in the ice shelf in the last 10 years — headed toward another chasm about 20 miles away.

The rift then pushed northeast more than half a mile a day starting in January, cutting through the 490-foot thick ice shelf, scientists said. The iceberg formed when the crack widened on Feb. 26, releasing it from the ice shelf.

“Our teams at BAS have been prepared for the calving of an iceberg from Brunt Ice Shelf for years,” Director of British Antarctic Survey Dame Jane Francis said in a statement.

The BAS monitors the ice shelf daily using an automated network of high-precision GPS instruments surrounding the station, which measure how the ice shelf is deforming and moving. Satellite images from the European Space Agency, NASA and German satellite TerraSAR-X are also used, Francis said.

The impact of the calving event on the ice shelf is unclear, scientists said. Over the coming weeks or months the iceberg may move away or could run aground and remain close to the ice shelf, Francis said.

The BAS research station is currently closed for the Antarctic winter and will likely be unaffected by the calving event, scientists said. The BAS said the station was moved further inland in 2016 to “avoid the paths” of two chasms named “Chasm 1,” which formed in 2012, and the “Halloween Crack,” which formed in 2016. Neither have grown in the past 18 months.

British Antarctic Survey Director of Operations Simon Garrod said in a statement that moving the station was a “wise decision.”

“Our job now is to keep a close eye on the situation and assess any potential impact of the present calving on the remaining ice shelf,” Garrod said. “We continuously review our contingency plans to ensure the safety of our staff, protect our research station and maintain the delivery of the science we undertake at Halley.”

Staff has only been employed at the BAS Antarctic station during the summer since 2017 due to the difficulty of evacuation during the dark winter months, when skies are pitch black.