Washington: US Secretary of State Antony Blinken accused Russia of “gaslighting” and pushing a “false narrative” that it was under threat from Ukraine and NATO to justify a troop build-up near its border with the former Soviet republic.

Blinken addressed reporters at the State Department on Saturday AEDT ahead of meetings of US and Russian diplomats in Europe next week aimed at bringing down the temperature between Russia and the West, and after a virtual meeting with NATO foreign ministers earlier in the day. 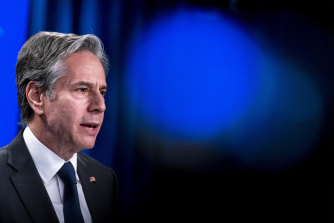 Blinken said Russia has worked for years to undermine Ukraine’s democratic institutions, interfere in its politics, block energy and commerce and sow mistrust with propaganda and disinformation.

Russia had positioned nearly 100,000 troops near its border with Ukraine “with plans to mobilise twice that number on very short order” and justified doing so with “misinformation” that Ukraine was seeking to provoke a conflict, Blinken said.

“That’s like the fox saying it had to attack the hen house because its occupants somehow pose a threat. We’ve seen this gaslighting before,” Blinken said, citing Russia’s 2014 seizure of Crimea and backing of separatists in the Donbass region.

“The idea that Ukraine is the aggressor in this situation is absurd,” Blinken said, adding that Moscow was “simultaneously driving the false narrative that NATO is threatening Russia”. 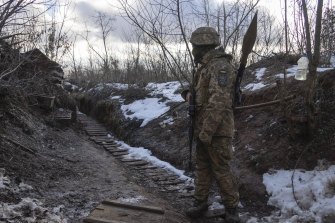 A Ukrainian marine walks in a trench at the line of separation from pro-Russian rebels in the Donetsk region, Ukraine.Credit:AP

But a diplomatic solution was still possible and preferable, and there were areas of potential progress in next week’s meetings, Blinken said.

“Next week we’ll reconfirm our readiness to increase transparency, institute new risk-reduction measures and renew efforts to address nuclear and conventional threats to European security,” he said. “But again, it has to be a two-way street.”

The United States and NATO roundly rejected Russian demands that the alliance not admit new members amid growing concerns that Russia may invade Ukraine, which aspires to join the alliance.

Blinken and NATO Secretary General Jens Stoltenberg said Russia would have no say over who should be allowed to join the bloc. And, they warned Russia of a “forceful” response to any further military intervention in Ukraine.

Their comments amounted to a complete dismissal of a key part of Russian President Vladimir Putin’s demands for easing tensions with Ukraine.

Putin wants NATO to halt membership plans for all countries, including Ukraine. The former Soviet republic is unlikely to join the alliance in the foreseeable future, but NATO nations won’t rule it out.

“We’re prepared to respond forcefully to further Russian aggression, but a diplomatic solution is still possible and preferable if Russia chooses,” Blinken told reporters in Washington. He categorically dismissed Russia’s claim that NATO had pledged not to expand eastward following the admission of several former Soviet satellites after the end of the Cold War.

“NATO never promised not to admit new members; it could not and would not,” Blinken said, accusing Putin of raising a strawman argument to distract from Russian military moves along the Ukrainian border.

“They want to draw us into a debate about NATO rather than focus on the matter at hand, which is their aggression toward Ukraine. We won’t be diverted from that issue,” Blinken said.