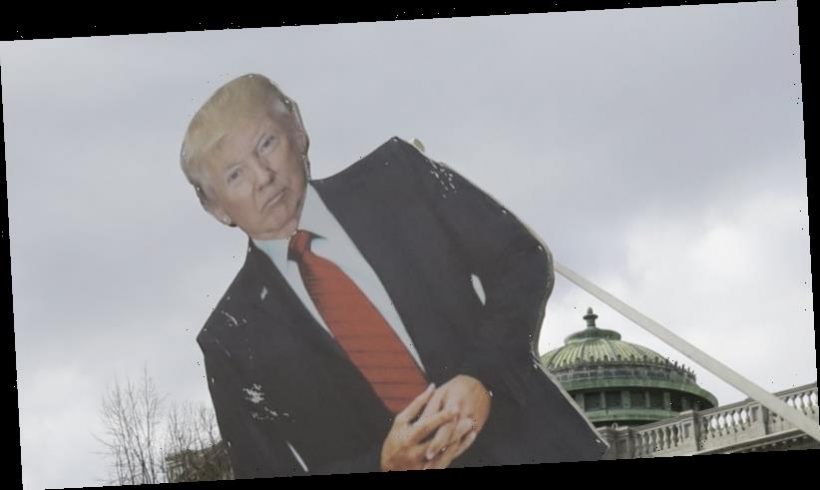 San Francisco: Besides being the first president to get impeached twice, Donald Trump will have a stain on his legacy with arguably longer-lasting consequences: He's about to become the only American leader in a century with more than 400,000 deaths from one event on his watch.

The US is expected to cross that sombre threshold soon, likely on Monday, yet another reminder of how poorly the nation with the world's largest economy has fared during the coronavirus pandemic. The current COVID-19 death toll is about 396,000. 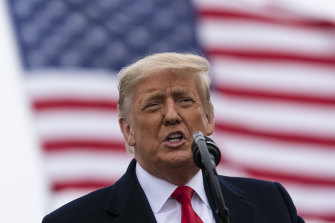 Not since Woodrow Wilson was in office during the 1918 flu pandemic – which killed about 675,000 in this country and 50 million worldwide – had a president overseen the loss of so many American lives.

That total is fast approaching the 405,000 US fatalities from World War II – thousands of them recorded when Harry Truman was president after Franklin Delano Roosevelt died in April 1945 – to rank as the third-deadliest event in the history of the republic. About 618,000-750,000 were killed in the Civil War of 1861-1865.

"What's so troubling about this loss of life is it was preventable," said Steven Woolf, director emeritus of the Centre on Society and Health at Virginia Commonwealth University. "This is an infectious disease we knew how to prevent, and as difficult as it is, far easier to solve than defeating Nazi Germany. And yet, we did not mount a response to wage war against this virus as we have in these other situations."

Thomas Whalen, an associate professor at Boston University and an expert on the American presidency, is even harsher in his assessment. Whalen cited reporting by journalist Bob Woodward, who taped Trump on February 7 acknowledging how dangerous the virus was even though he repeatedly downplayed its severity publicly.

"He has, you could say, blood on his hands," Whalen said of Trump. "He knew this was a threat and really did not do what was necessary to respond to it in a thoughtful and resourceful way."

The US, the undisputed global leader in coronavirus infections and fatalities, has averaged more than 230,000 new infections and 3000 deaths per day in January, part of a powerful winter surge that has overwhelmed hospitals in many regions and is likely to last through the rest of the month despite the arrival of vaccines.

The Institute for Health Metrics and Evaluation at the University of Washington projects 405,000 deaths by Wednesday's inauguration day – the one-year anniversary of the first reported COVID-19 case in the US – and more than 500,000 by February 19.

Along with the vaccines, the biggest ray of hope public health specialists see comes from the incoming administration of President-elect Joe Biden, which is likely to bring a science-based approach to containing the virus.

Except for the efforts to develop the vaccines in record time, the Trump administration's response to the pandemic has been assailed by the medical community. Even the vaccine achievement has been tarnished by their slow rollout.

"By any metric, anybody who believes in data and science would acknowledge we've done terribly with this pandemic, arguably the worst in the world," said John Swartzberg, a professor emeritus of infectious diseases at the University of California-Berkeley, citing failures with testing and protective equipment along with mixed messaging on masking. "What that tells us is how badly things can go if you have a bad administration. 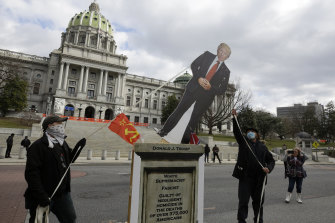 As the death toll from COVID-19 hits 400,000 in the US, many Americans blame Donald Trump and his administration. Credit:AP

"Everybody, including me, is excited about the vaccines, excited about science and what it can do for us. It's incredibly important. But I think we downplay the importance of what a good administration can do in managing this pandemic. We will do a lot better when we have an administration that follows science and follows public health, that gives consistent messaging, that doesn't politicise key institutions like the CDC and the FDA."

Biden has assembled a COVID-19 response team and vowed to have 100 million doses of vaccine administered in his first 100 days in office. On Thursday he proposed a $US1.9 trillion ($2.46 trillion) pandemic-relief package that includes $US70 billion for virus testing and a national vaccination program.

Though Swartzberg considers the 100 million vaccinations goal "a stretch," others said it's realistic, including Jason Schwartz, assistant professor of public health at Yale University.

Schwartz said the Trump administration set unrealistic expectations by saying 20 million Americans would be vaccinated by the end of December. As of the last update Friday, 31.2 million doses had been distributed and 12.3 million vaccine shots had been applied, according to the Centers for Disease Control and Prevention.

The vaccine distribution has been hampered by a funding shortage – CDC director Robert Redfield pleaded for more resources in September, but they weren't approved until three weeks ago – and a lack of co-ordination and direction from the federal government in the enormous task of making vaccines available to 330 million people in 50 states, Schwartz said.

"The design so far of this vaccination rollout was so decentralised that it was basically, ship vaccines to each state, you tell us where to ship them, give us the mailing addresses and you take it from there," Schwartz said. "One thing we've seen already from the incoming Biden administration is they intend to have a far more active and engaged role in supporting this vaccination effort, co-ordinating it, leading it."

The early stages of the vaccination program are the easy part, Schwartz said, because those first in line – healthcare workers, plus residents and staff of long-term care facilities – are readily accessible. Expanding the effort to rural communities and people without regular access to health care will be harder.

Schwartz said it's important to keep promoting mitigation measures such as mask use, social distancing and frequent hand washing. Neither the vaccines nor the strategies implemented by the new administration are likely to make a major dent on the pandemic for at least a couple of months, and researchers don't know whether vaccines prevent transmission in addition to symptoms.

Swartzberg predicted a "horrific" rest of January followed by several ups and downs in cases, deaths and hospitalisations throughout February before a gradual leveling off by mid-March and continued improvement after that. He doesn't envision a return to some semblance of normality before late summer, a less optimistic outlook than presented by some members of the Trump administration, such as former Operation Warp Speed head Moncef Slaoui.

Any forecasts could be nullified by the recent emergence of more contagious variants of the virus – the CDC said on Friday the new mutation first found in Britain could become the dominant strain in the US by March – or in the best of cases, by the development of therapeutics that might ameliorate the disease's worst effects.

Regardless, Biden's team will be charged with clearing a monumental wreckage.

Woolf pointed out COVID-19 was the country's leading cause of death in the spring of 2020 and late in the year, surpassing cancer and heart disease.

That's not even taking into consideration the likely undercount of coronavirus fatalities or other excess deaths caused by the pandemic – often because of people skipping or being unable to access medical care – which Woolf estimates at one for every two COVID-19 deaths.

The virus is likely to kill more than 400,000 Americans in less than a year – the first such death is believed to have occurred on February 6 – whereas it took almost four years for that many US service members to perish in World War II.

Woolf said an infectious disease had not been America's leading killer since the flu pandemic, and he highlighted three reasons why COVID-19 turned into such a scourge here:

"This shouldn't have happened, and it didn't happen in other countries that are modern and industrialised," Woolf said. "This is a uniquely American phenomenon."

Whalen said the calamitous handling of the pandemic brings into question the notion, widely held in these shores, that the US is the world's greatest country.

He drew a parallel between Trump and Wilson, who presided over the US participation in World War I from April 1917 to the conflict's end in November 1918.

Not only did both leaders contract the disease that engendered a pandemic, Whalen said, both were less than forthcoming with the public about the danger it presented and showed little regard for human life, in Wilson's case sending infectious soldiers into battle on crowded vessels.

Wilson was contending with two catastrophes, whereas Trump was enjoying the fruits of a thriving economy and domestic peace when the coronavirus emerged as a threat.

"The fact we were fighting a real ugly world war [in 1918], that kind of pushed everything to the background," Whalen said. "But we don't have that excuse right now. Trump has no excuse."