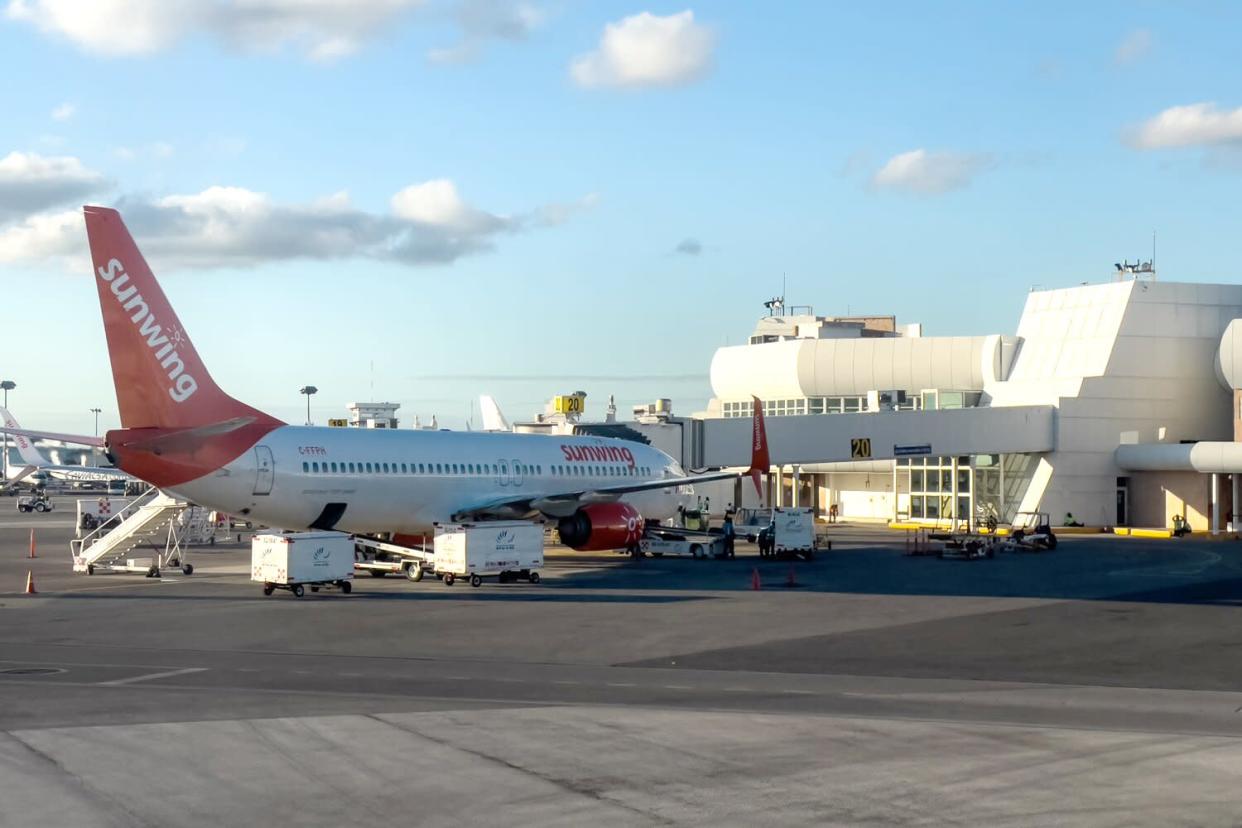 A group of Canadian influencers is currently stuck in Mexico and being denied flights home by three airlines after videos showed them partying maskless and refusing to follow COVID-19 protocols on a December 30 flight from Montreal to Cancun.

The flight to Cancun was chartered through Sunwing Airlines, a Toronto-based Canadian airline, by a man named James William Awad, who organized the event as part of his company 111 Private Club, which is described on its Instagram profile as an "Exclusive Private Group (By Invitation Only)."

Videos posted on Twitter of the December 30 flight show the maskless passengers — many of whom are social media stars and Canadian reality TV personalities — dancing in the aisle and on the seats, drinking and passing around a bottle of vodka and vaping onboard.

A report in a Canadian news outlet states that the group became so rowdy that the flight attendants tried to avoid the main cabin for their own health and safety.

"As previously confirmed by Sunwing Airlines and widely documented in videos online and on social media, a group of passengers on a recent private charter flight exhibited unruly behaviour and did not respect aviation or public health regulations," Sunwing told PEOPLE in a statement.

The airline also shared why they decided to cancel the group's flight home, which was supposed to take place on Wednesday, January 5: "The incident prompted an immediate internal investigation, and Sunwing Airlines developed a robust risk mitigation plan to return the passengers to Montreal while ensuring the health, safety and security of the crew and passengers which is always our top priority."

But, according to Sunwing, the group refused to accept the guidelines for the return flight.

The airline's statement continues: "Our decision to cancel the return flight was based on the group's refusal to accept all terms and our security team's assessment that non-compliance would be likely based on their previous disruptive onboard behavior."

In a statement posted to Twitter, Awad claims that he and the group agreed to all the terms set forth by the airline — including keeping masks on at all times, no alcohol, all passengers to "board in a sober condition" and more — except for one: there was no meal service for the flight.

"We couldn't conclude an agreement because Sunwing refused to provide meals to the group for a 5h flight," he wrote.

Two other Canadian airlines, Air Transat and Air Canada, subsequently refused to fly the group back to Montreal, each releasing statements on the matter citing their obligation to keep their crew and other passengers safe.

In a press conference this week, Canadian Prime Minister Justin Trudeau called the group's actions "completely irresponsible" and "a slap in the face" to those who have been following protocols amid the recent increase in COVID-19 cases due to the omicron variant. 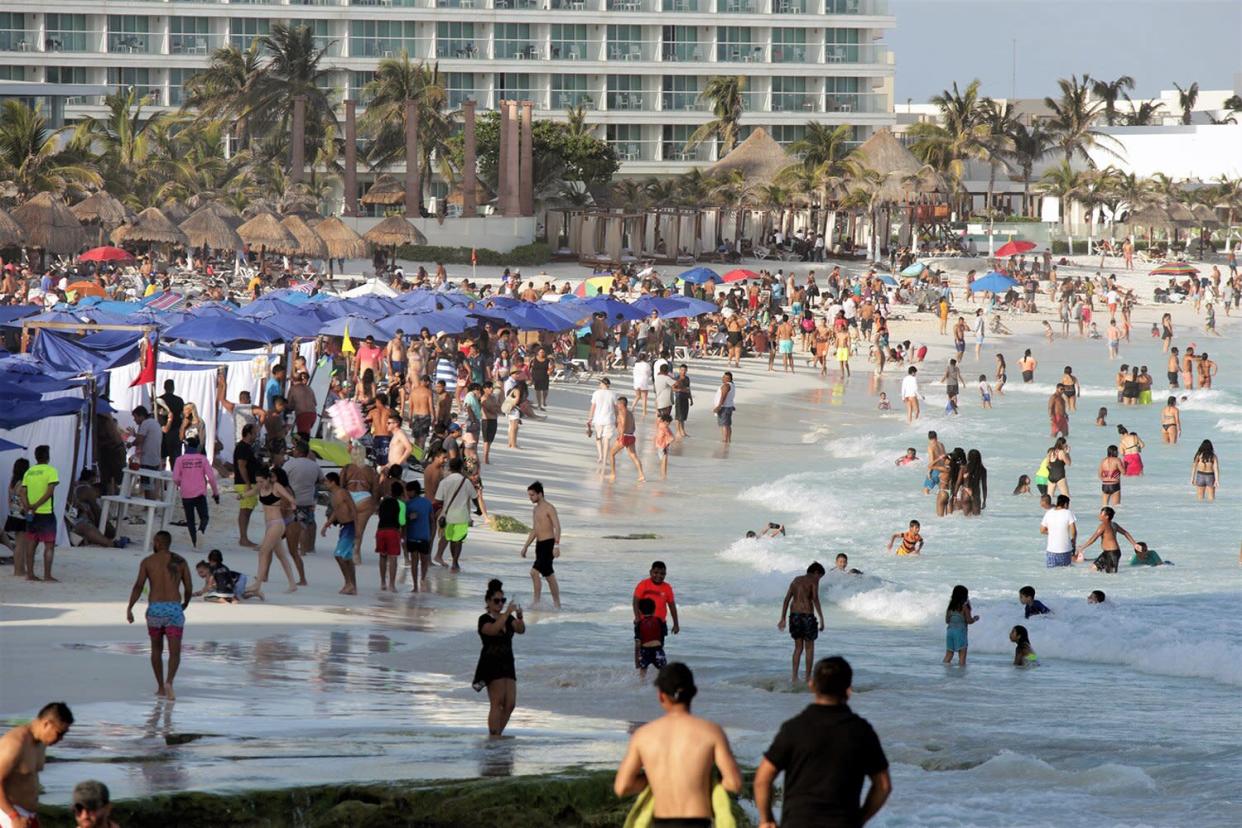 Medios y Media/Getty A beach in Cancun in April 2021

In the province of Quebec, where the group traveled from, all public venues — including schools, bars and workplaces— have been shut down since December 20, and a 10 pm to 5 am curfew has been put in place as of December 31.

"Like Canadians who have seen those videos, I'm extremely frustrated," Trudeau said. "This is a situation Transport Canada takes extremely seriously and we are following up."

On Tuesday, Canada's Minister of Transport, Minister of Health and Minister of Public Safety released a statement noting that Transport Canada has been in contact with the airline about the incident, and that "fines of up to $5,000 [CAD] per offence could be issued to passengers."

In Awad's Twitter statement, he notes that this was his "first travel event" for 111 Private Club, and he thought he was doing all he could to ensure his group's safety, like getting COVID tests for the group ahead of their flight "even if the Mexican authority does not require a negative PCR test to enter."

RELATED: FAA Warns of Additional Flight Delays Due to Weather, 'Increased Number' of Employees Out with COVID-19

"I have significantly learned, and I am still learning from this experience," he wrote, noting that he is working to get everyone "back home safely as quickly as we can."

Rebecca St-Pierre, a 19-year-old student from Quebec who was onboard the flight to Cancun, told Canada's Global News that she won the trip in an Instagram contest, and was not expecting the party atmosphere on the plane. She claimed that not everyone was engaged in the boisterous behavior, adding that two girls beside her were "trying to sleep."

According to the report, St-Pierre has since tested positive for COVID-19, and is quarantining in Tulum, Mexico. Information on the health of the other passengers has not been released.