The NSW State Emergency Service faces accusations of failing to plan for a catastrophic flood in Lismore and the wider Northern Rivers, despite decades-old research warning such a disaster was probable.

In exclusive interviews, as well as testimonies to two separate inquiries, Northern Rivers political and community leaders, residents, rescuers and insiders have detailed how SES management faltered in the face of the natural disaster, while its army of volunteers strived, often without any communication or direction, to combat the disaster that swamped the Northern Rivers of NSW. 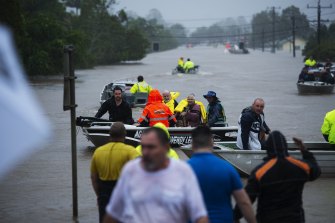 Lismore residents rally as the city is inundated by flood water. Credit:Elise Derwin

Four people died in the February 28 flood and thousands remain homeless after the event, which is now the subject of an independent inquiry by Professor Mary O’Kane and former police commissioner Michael Fuller.

The inquiry was due to report the first of its findings by June 30 and a second report later in the year. However, it will now hand down one report by the end of July. A separate state parliamentary inquiry is also being held.

Local state MPs Geoff Provest, Janelle Saffin and Tamara Smith also have expressed concern about the SES response, including a lack of co-ordination, inadequate training and a lack of local knowledge from fly-in professional staff, including the failure to evacuate earlier the towns down river of Lismore, including Coraki, Woodburn, Wardell and Broadwater, as well as the SES activities in the Tweed Valley and Byron Shire.

While the size and speed of the flood in the February disaster stunned and overwhelmed everyone, with rainfall records being set for NSW, many residents and community leaders are asking why the SES, the designated combat agency for flooding under NSW law, was unable to right itself in the immediate aftermath. And, most importantly, whether it prepared for how such a catastrophic event would affect its ability to rescue people.

Since the flood, it has emerged that the Lismore Citizens Flood Review Group and businesses met with senior SES management in November 2020 about its plans for a major flood in the Northern Rivers. They were especially concerned about what would happen if a La Nina event was declared. In La Nina years, the risk of major and multiple floods in the Northern Rivers increases dramatically. The Bureau of Meteorology declared a La Nina event in November last year.

Lismore Citizens Flood Review Group co-ordinator Beth Trevan said that the Bureau of Meteorology and the CSIRO had demonstrated to the Royal Commission into National Natural Disaster Arrangements that the pattern and effect of La Nina was likely to bring multiple cyclones and storms from the Coral Sea along the coast similar to those experienced during the Brisbane floods in 2011. However, she said the concerns of the groups were dismissed by the SES.

“We tried several times to ask the question, ‘What are you going to do when the whole coast is in flood?’ Because that’s happened many times before [when La Nina has taken hold] and we couldn’t get them to understand,” Trevan said.

“Well, I suspect they understand now, because that’s exactly what happened in February.”

Trevan said the turnover in senior SES leadership – seven commissioners in the past 10 years – and in salaried officers in the Northern Rivers meant no one had an understanding of what was needed in the region.

On Thursday, Saffin also questioned what plans the SES had devised for itself and the community in the advent of a flood higher than the 1974 levels in the Northern Rivers.

A “catastrophic” flood higher than the previous 1974 and 1954 levels has long been predicted for Lismore. In 1993, a report by engineers Sinclair Knight, commissioned by Lismore City Council, found that 16.5 metres was a probable maximum flood height in Lismore. The Lismore Floodplain Risk Management plan of 2014 anticipated a 14-metre flood.

The Lismore City Local Flood Plan – which is overseen by the SES and the local emergency management committee, which is made up of all the emergency service heads and the local council – recognises a probable maximum flood height of 15.9 metres, but it does not deal with the consequences of a flood higher than 12.4 metres.

This meant that it did not contemplate, for example, the flooding of Fromelles Manor aged care facility, on the edge of the flood zone, where 63 residents were stranded for hours on February 28.

“Everybody keeps talking about this flood as being ‘unprecedented’,” Saffin said. “If you read all the literature, if you read all the studies, it has been predicted that we [Lismore] could have big floods, even up to over 16 metres.

“[Unprecedented] is used almost as an excuse as to why certain actions are not taken. Unprecedented becomes almost, ‘Well, we couldn’t have done this any better’. Well, you can.”

During the February flood event, the SES was relying on forecasts from the Bureau of Meteorology to organise its response. Those forecasts have been criticised as inaccurate and out-of-date by the time the SES received them.

The rescue organisation’s means of identifying the location of victims primarily through its emergency hotline and triple zero was overwhelmed once the floodwater hit Lismore, undermining its ability to co-ordinate the safety and wellbeing of the wider community. Authorities also struggled to respond to the needs of the downriver towns and villages of Woodburn, Broadwater, Coraki and Wardell, which were hit by floodwater more than 24 hours after Lismore was inundated.

A senior representative in the multi-agency response working inside the Incident Control Centre in Lismore described how the management team was overwhelmed, playing catch-up, making decisions ad hoc and unable to forward plan.

In the ensuing chaos, a major communication breakdown occurred within the SES on February 28, when a call went out for residents with boats to assist in the rescue operation. However, SES headquarters in Wollongong tried to shut the request down, a source inside the Incident Control Centre in Lismore said.

Lismore Mayor Steve Krieg told the Herald that he was rebuked by a senior SES officer for posting on his council’s Facebook page the call for the community to assist in the rescue. The community ignored the SES management’s about-face.

Volunteer local SES units lost communication with the Incident Control Centre for long periods of time during the disaster.

Ed Bennett, a member of the Lismore local SES unit who joined in 1964, told a NSW parliamentary hearing that many lives would have been lost without the “tinnie army” of community rescuers. Their arrival, however, also created safety concerns and led to confusion about who had been rescued.

Elsewhere in the Northern Rivers, community members often found themselves acting alone, particularly in the Tweed Valley, the Byron Shire and the Richmond Valley.

Rescues were co-ordinated by groups through social media networks, enlisting hundreds of volunteers, including high-profile surfers Mick Fanning and Joel Parkinson on jet-skis, and TripADeal founder Norm Black, who brought in helicopters to save people trapped by landslides and from isolated, flooded properties.

Member for Tweed Geoff Provest told the parliamentary inquiry that the SES co-ordination was absent during the disaster.

“I was actually loading food and stuff into people’s boats. We had well over 100 community members with their boats. The concern I had as the local member of parliament was that I had no idea whether the two guys in front of me in the tinnie had fuel, had lifejackets, knew what they were doing, and I was basically saying, ‘Head there until somebody waves you down’.”

The NSW upper house inquiry into major flooding across NSW was told by government agencies and other volunteer organisations that SES requests for rescue resources were delayed. NSW Marine Rescue said they were not contacted until March 1, however, Fire and Rescue NSW told the Herald that they responded to an SES request for rescue boats, technicians and a pump four days before the flood, sending them to the Northern Rivers on February 25.

Other agencies with boats and jet skis refused to allow their untrained staff or “unsuitable” boats to enter the floodwater, fearful any fatal mishap would land them before the courts or worse in jail.

NSW SES Commissioner Carlene York told the parliamentary inquiry: “We need to raise the bar about what is the worst case scenario for a flood in these areas into the future, and that will be taken into account in our decision-making, our warnings and our information that goes out to the public.”

An SES spokesperson said calls to their emergency hotline are answered in turn as they move through the queue and callers can also hold their place through a virtual hold where a call back is made. When the queue limit is exceeded, callers are directed to a recorded avalanche message that advises callers that the NSW SES is unable to currently take the call and to try again later or call triple zero if life-threatening.