Dozens of people were feared dead after a massive blaze broke out on Friday at a psychiatry clinic located on the fourth floor of an eight-story building in Osaka, Japan.

At least 24 people have been confirmed dead in wake of what is now being investigated as a possible arson attack in the bustling business and entertainment district. According to local media, authorities are on the hunt for a man who witnesses saw carrying a paper bag from which an unidentified liquid was dripping, though police have yet to confirm this detail. 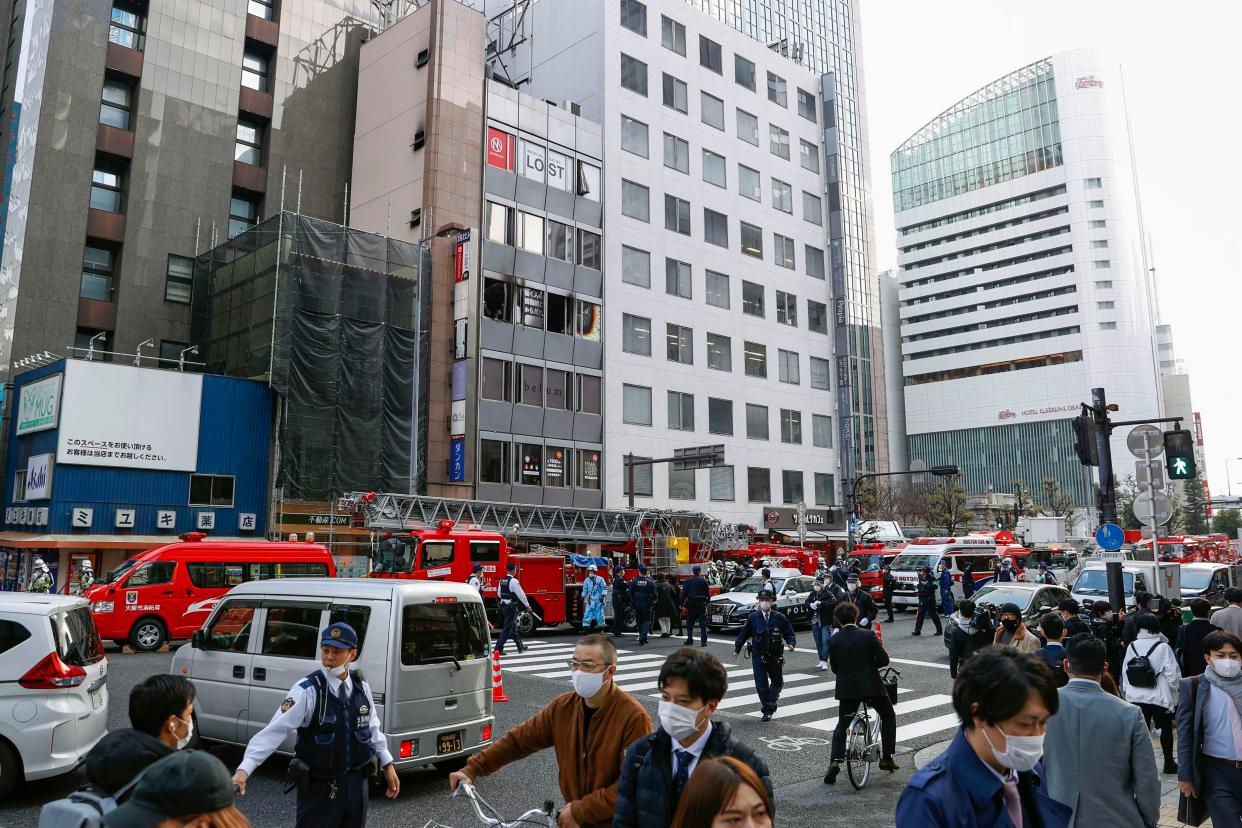 Fire engines park near a building, center in the background, where a fire broke out in Osaka, Japan, on Friday. (西沢幸恵/)

The fire broke out on the building’s fourth floor shortly after the clinic opened around 10 a.m., and then quickly started to spread. First responders said the flames were mostly contained within a half-hour of their arrival. Video from NHK shows fire trucks racing toward the scene as plumes of black smoke billow over the popular shopping district.

The charred remains of the fourth-floor clinic could also be seen through the shattered windows of the narrow office building.

In total, 70 fire engines responded to the blaze, which took nearly six hours to completely extinguish, according to officials. 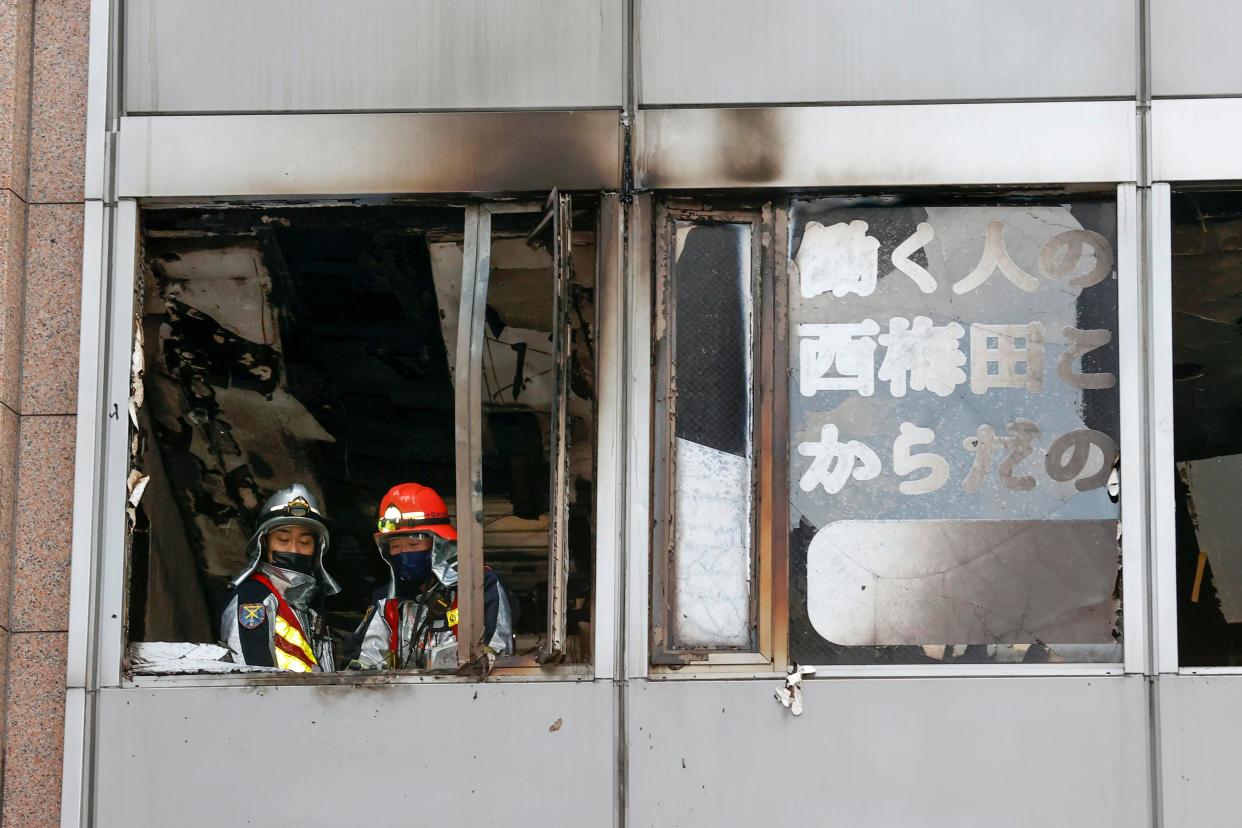 Firefighters stand on a floor at a building where a fire broke out in Osaka, western Japan Friday, Dec. 17. (西沢幸恵/)

Firefighters discovered another three people on the scene in a state of cardiac arrest or “shinpai teishi,” a term used when victims do not show any vital signs. Authorities in Japan will not confirm deaths until they are pronounced at hospitals and all necessary procedures are have been completed.

A doctor at one of the hospitals where several of the victims are receiving care said he believed most of those who died were killed inhaling carbon monoxide as they had limited external injuries. 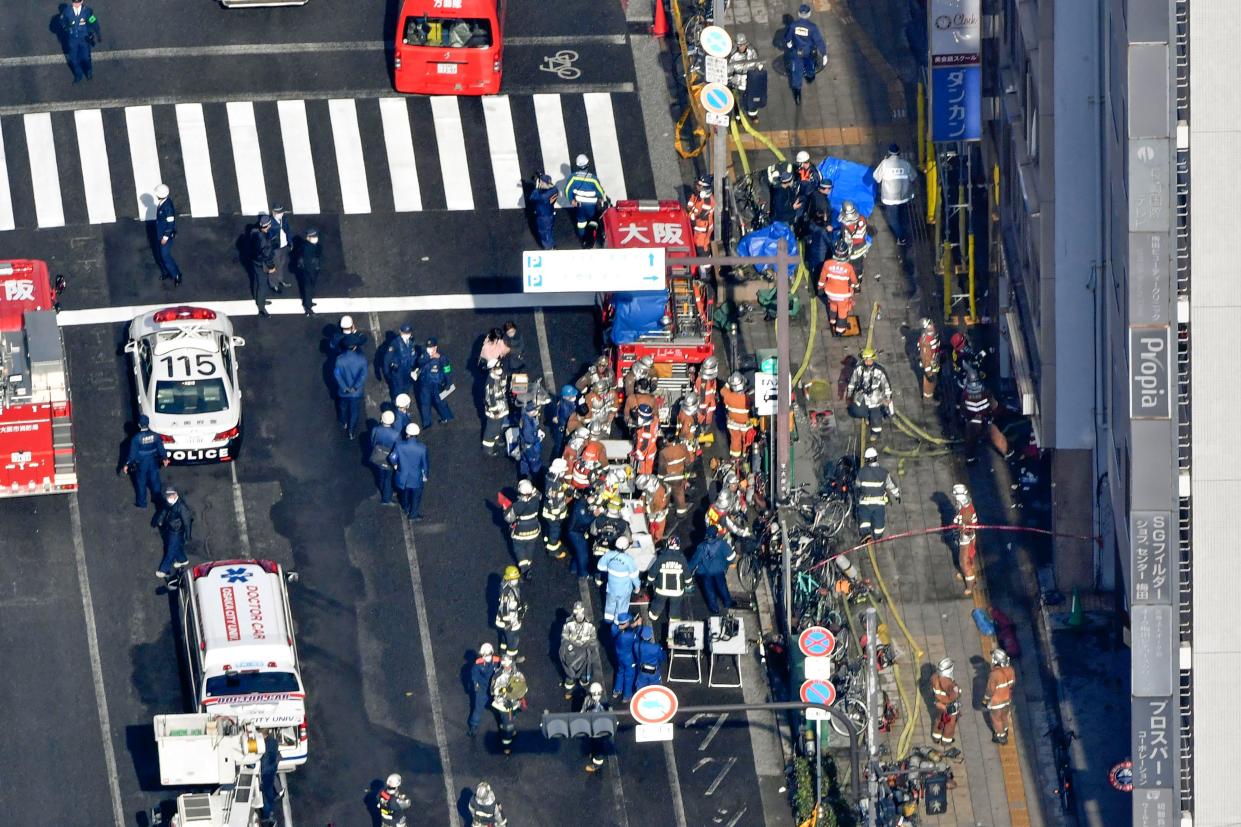 Policemen and firefighters gather near a building where a fire broke out in Osaka, western Japan Friday, Dec. 17.

At least one woman was rescued from the sixth story while most people on the other floors of the eight-story building, which also houses an English language school and several businesses were believed to have been safely evacuated, fire officials said.

While the official cause of the fire remained unknown Osaka police have set up a team at the prefectural police headquarters, an indication they suspect foul play.