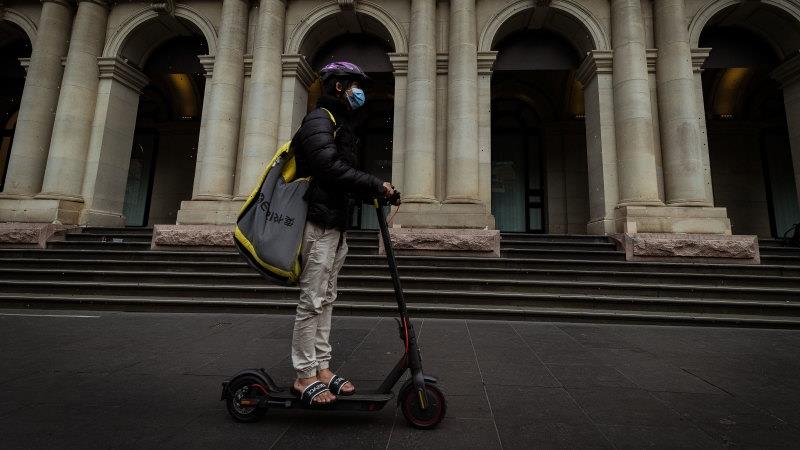 But more recently, the once-comfortable amble down Federation Trail in Williams Landing has started to resemble a minefield, as dozens of e-scooters, electric skateboards and hoverboards whiz past him. 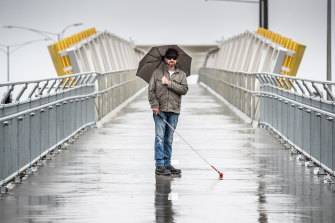 Cameron Logan is vision impaired. He feels unsafe when he shares footpaths and shared use paths with e-scooters and powered skateboards.Credit:Jason South

Mr Logan, who is vision impaired, has been clipped several times on the trail by the silent and speedy vehicles.

“On a good sunny day, even during lockdown, you can get literally hundreds of these things go past all the time,” Mr Logan said.

“It’s not just visually impaired people who are potentially put at risk,” he said. “It’s all pedestrians, especially children. Kids can easily move from left to right and who knows what could happen. They go quite fast.”

It is illegal to use most e-scooters in Victorian public areas – including footpaths, shared paths and roads. 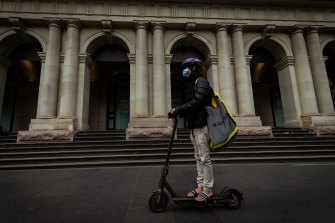 Electric scooters are becoming a common sight on the streets of Melbourne.Credit:Getty

The only vehicles that can be legally used must have a top speed of less than 10km/h or a power output less than 200 watts, which are not widely sold.

Yet people continue to buy and illegally operate the vehicles on Melbourne’s streets, creating new obstacles for pedestrians, cyclists and motorists.

The new powered vehicles exist within a policy grey zone, with Victoria Police warning it is being “inundated” with complaints and waging a crackdown, while the state government moves to trial the vehicles in an attempt to update its laws to allow for the new technology.

Vision Australia has warned that those who are blind or have low vision are especially at risk, with a new survey revealing 50 per cent of vision impaired people have been involved in an accident or near-miss with an e-scooter.

“Imagine how frightening it is knowing this could knock you over at any time you’re walking down the street,” Chris Edwards, Vision Australia’s manager of government relations and advocacy said.

Of the 120 people who completed the survey, 82 per cent said they did not feel safe walking on footpaths and about 40 per use now use footpaths less often.

The small, unregistered vehicles are causing headaches for Victoria Police, which is carrying out crackdowns and education campaigns in regional areas amid an increase in complaints and injuries.

While launching a police campaign on Friday, Acting Senior Sergeant Peter Christo of Torquay police told local media that officers were “getting inundated with complaints about reckless use of e-scooters, cutting in front of cars, pedestrians and being used as a means of escape from low-level criminal offending”.

But police enforcement is being ramped up barely two weeks after the Victorian government unveiled a new trial of e-scooters.

The trial, set to start later this year, would see e-scooters used in bicycle lanes, shared paths, and roads with a maximum speed of 50km/h in local government areas of Melbourne, Yarra and Port Phillip and Ballarat for 12 months.

This could result in an overhaul of Victoria’s road rules, bringing the state in line with Queensland, South Australia and the ACT, which have legalised e-scooters on roads and footpaths.

The vehicles offer a climate-friendly alternative to the car and have been billed as an affordable and convenient form of transport, especially as people do more local trips in the wake of the COVID-19 pandemic.

But Ben Rossiter, the executive director of pedestrian lobby group Victoria Walks, said the vehicles were inappropriate for pedestrian paths.

A “hierarchy” had formed on shared paths where pedestrians were always forced to make way for faster and heavier powered vehicles or bicycles, Mr Rossiter said.

He warned of an expected surge in e-scooter use as people come out of lockdown and called on the government to build more segregated pathways, which separated pedestrians from other transport modes.

Acting Assistant Commissioner John Fitzpatrick said police across the state had noticed an increase in the use of e-scooters. He said police supported the Victorian government’s trial to explore how e-scooters can be used safely.

“Currently, the law states that e-scooters cannot be ridden on Victorian roads or footpaths. Anyone caught may be subject to fines, including for unlicensed riding, unregistered vehicle, driving on footpaths, and failure to wear a helmet,” he said.

A government spokeswoman said e-scooters were an “emerging technology – that’s why we’re doing a trial to understand how they can safely be used throughout Victoria’s network of low-speed roads, shared user paths and bicycle lanes”.

“Importantly, these devices will not be permitted to operate on footpaths – and riders will be expected to follow all road rules and share the roads safely.”