Former Team GB gymnast, 23, who sexually assaulted drunk woman after bragging ‘I’m going to f*** her’ to his friends walks free from court because judge said he was only 21 at the time

A former Team GB gymnast who abused a vulnerable and drunk woman after bragging to friends ‘I’m going to f*** her’ has walked free from court.

Alexander Hicken, a coach at a renowned gymnastics school, preyed on his intoxicated victim after she was put to bed at a party because she was so drunk.

The 23-year-old tumbling coach, who had a girlfriend, ignored the woman’s demands to stop during the eight-hour ordeal and repeatedly sexually touched her.

Now the disgraced gymnast, who represented the junior Team GB at Loule Gymnastic World Cup in Portugal in 2012, has been handed a suspended sentence of 21 months imprisonment.

At the hearing, the victim said Hicken ‘abused me, my body and my trust’ and the attack had led her to become depressed, suffer from anxiety and have suicidal thoughts.

In a statement read to the court, she said: ‘I can say with all certainty this assault has changed my life 100 per cent. 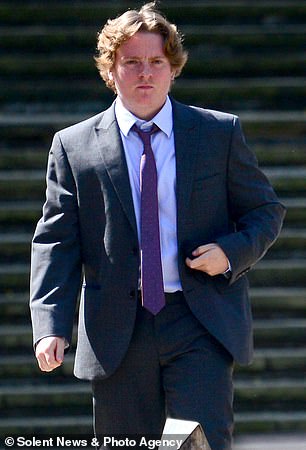 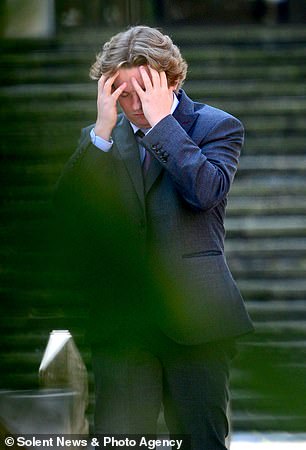 Former Team GB gymnast Alexander Hicken (pictured), from Basingstoke, has been convicted of sexually assaulted an intoxicated woman after she was put to bed at a party in 2019

‘I blame myself constantly for what happened… since this occasion I will never drink to excess, I don’t like the idea of not being in control.

‘Since this happened I have nightmares where I think Alex is sitting at the end of my bed. I often find myself looking around my room to check he isn’t there.’

Emily Cook, prosecuting, described it as a ‘sustained incident’ against a ‘particularly vulnerable’ victim which caused a ‘large degree of psychological harm’.

Adrienne Knight, representing Hicken, gave 11 character references to the judge from family and friends of Hicken which she said showed ‘another side to this young man’.

She argued there was a ‘glimmer of hope’ he could be rehabilitated if he was not imprisoned immediately.

He escaped an immediate jail term after the judge said Hicken had been just 21 at the time of the attack but had an ‘unacceptable attitude towards women’.

Judge William Mousley QC told him: ‘This was repeated behaviour against a vulnerable person. You targeted someone who was drunk… you took advantage of her drunkenness.

‘Your behaviour has caused lasting damage. It’s changed her personality, causing her to suffer a loss of confidence. 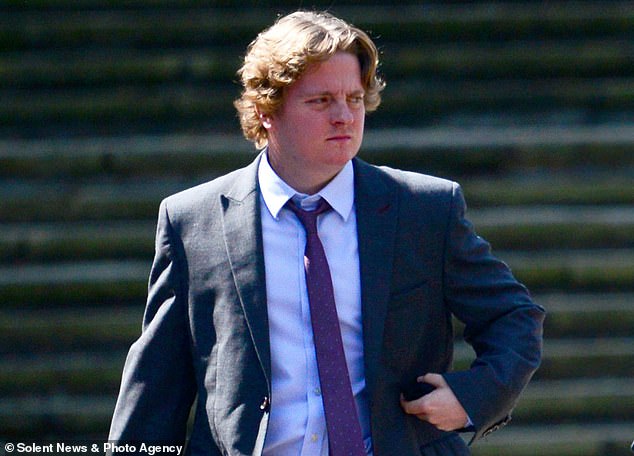 The disgraced gymnast (pictured), who represented the junior Team GB at Loule Gymnastic World Cup, was spared jail after he was convicted unanimously by jurors after a four-day trial

‘She did nothing wrong at all. She has no reason to blame herself for anything that took place.

‘You may maintain your denial of having done anything wrong… all that portrays is an unacceptable attitude towards women.

‘It means you have no recognition still of the awful way in which you behaved and the harm you have caused.

‘I must have regard to the fact you were only 21 at the time you committed this offence.

‘You are now barred from being a gymnastics coach which you have done for a number of years and your employment opportunities will be restricted.’

Judge Mousley QC handed Hicken a 21 month prison sentence suspended for two years and gave him a restraining order banning him from contacting the victim for ten years.

During the four day trial earlier this year, jurors heard Hicken’s victim had drunk so much Lambrini and vodka jelly shots she ‘had to be put to bed’ at the party.

Hicken, who teaches children at Basingstoke Gymnastic Club in Hampshire, sat on the edge of her bed, rubbing her thigh and bottom, and was told to leave her room before going to the pub with others. 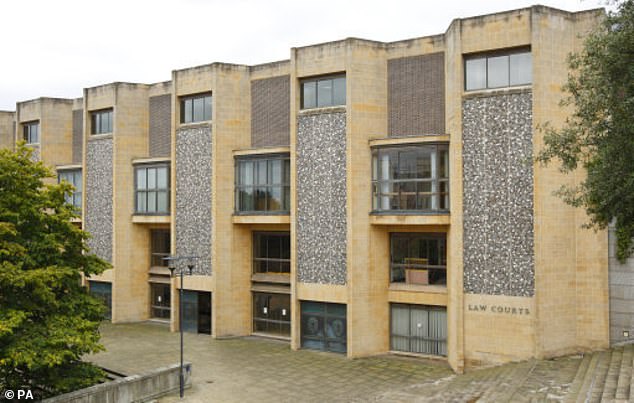 Ms Cook said: ‘On the way to the pub Alex Hicken was making claims about the victim and saying he was going to have sex with her and then said “whoops, shouldn’t have said that”.’

A witness said they overheard Hicken say ‘I’m going to f*** her’ during their night out.

When he returned to the house he sexually touched and kissed her but was startled by others coming upstairs.

The victim said: ‘I remember waking up and Alex was stood in the doorway. He came in, I asked him what he was doing.

‘He said at that point “you just want a s**g or something”. I said “I absolutely do not”.

‘He then went to get into my bed, and I asked him what he was doing. He said he just wanted a cuddle, I told him that he wasn’t going to get it from me because I didn’t want to.’

Hicken continually sexually assaulted his victim during an eight-hour time period where he repeatedly put his hand on her thigh and bum despite her telling him to stop and reminding him that he had a girlfriend.

Hicken also grabbed her body over her clothes whilst she lay ‘scared’ and ‘crying’.

The court was told that in the two days after she was assaulted, the woman made 27 separate searches on her phone in relation to sexual assault.

These included ‘how to deal with sexual assault,’ ‘mental health effects of sexual assault and abuse’ and ‘rape and sexual abuse helplines’.

Friends said the incident in 2019 had ‘changed her’ and she was ‘distressed’.

One told the trial: ‘(She was) quite distressed in a way I’ve never seen her before. She normally takes stuff on the chin but this had really knocked her, so I knew something drastic had happened.’