Washington: When Joe Biden appeared at the White House last month to explain his decision to withdraw US troops from Afghanistan, he insisted that a Taliban takeover of the country was not inevitable.

The Afghan army, Biden said, had 300,000 troops compared to 75,000 for the Taliban. And he claimed that the Afghan government troops were as “well-equipped as any army in the world”.

While few things in life are inevitable, a speedy Taliban takeover following America’s withdrawal looked highly possible even then.

Now, with the Taliban gaining control of provincial capitals at stunning speed, it looks extremely probable. 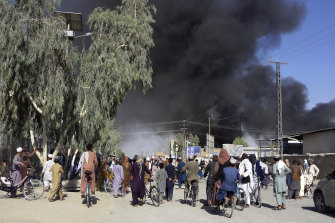 Smoke rises after fighting between the Taliban and Afghan security personnel, in Kandahar, south-west of Kabul.Credit:AP

According to a US intelligence assessment, the Taliban may control Kabul within a month. The security situation is so dire that thousands of US troops have been flown in to evacuate American diplomats and civilians. The world’s strongest military power has been reduced to asking the Taliban not to kill its citizens as they flee from the country.

It’s a chaotic, ignominious end to a 20-year war that has cost America more than $US800 billion ($1 trillion) and the lives of more than 2300 US troops. Rather than a considered departure, America’s departure resembles a Vietnam-style surrender.

It’s a demoralising moment, and another blow to American prestige following the disaster of the Iraq War, the global financial crisis and the botched response to the coronavirus. 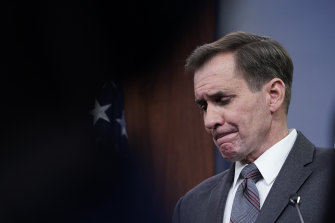 US Defence Department spokesman John Kirby reacts to a question about Afghanistan. He said the lack of will from Afghan forces to fight the Taliban could not be predicted.Credit:AP

Ineffectual calls from the US and others for the Taliban to return to the negotiating table only underline their impotence.

Meanwhile, the feeble resistance put up by Afghan troops across the country makes a mockery of the time and resources the US and its allies, including Australia, have invested in training them over decades.

Defence Department spokesman James Kirby on Saturday (AEST) said the US could not have predicted the Afghan forces’ lack of will to fight on their own. Perhaps it’s something that should have been predicted. 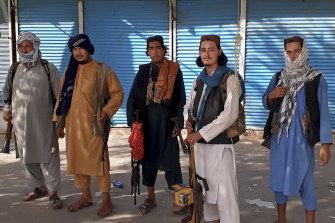 This moment is a low point in Biden’s presidency. He doesn’t bear responsibility for past failures in Afghanistan, but he is accountable for the haphazard, seemingly rushed nature of the US withdrawal.

Hawks in Congress have unsurprisingly leapt upon the chance to criticise Biden. They argue that a small, continuing US presence was a small price to pay to stop Afghanistan from falling into the hands of Islamic extremists.

“President Biden’s strategy has turned an imperfect but stable situation into a major embarrassment and a global emergency in a matter of weeks,” Republican Senate Minority Leader Mitch McConnell said. “President Biden is finding that the quickest way to end a war is to lose it.” 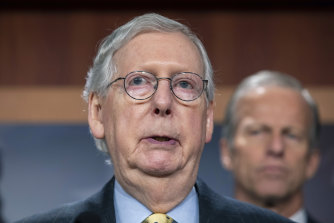 (McConnell and Cheney, it should be noted, also criticised Donald Trump when he moved to withdraw US troops from the Middle East during his presidency.)

Yet Biden is sticking by his decision to withdraw all US troops by the end of August. His rationale for leaving is clear-eyed and anything but knee-jerk given he was a sceptic of the war during the Obama era.

“How many thousands more American daughters and sons are you willing to risk?” he asked in July to those advocating a continued US presence in Afghanistan.

“Already, we have members of our military whose parents fought in Afghanistan 20 years ago. Would you send their children?”

The US, Biden said, had two primary goals in Afghanistan: to kill September 11 mastermind Osama Bin Laden and remove al-Qaeda’s capacity to use the country as a base to launch attacks on America.

Those goals, he said, have both been achieved.

The American public, which is tired of spending taxpayer funds on far-flung wars, is on his side.

A Quinnipiac University poll in late May found that 62 per cent of American adults approved of the decision to withdraw from Afghanistan while 29 per cent disapproved. Other polls have put support for withdrawing even higher.

Most of Biden’s party is sticking with him. Democratic Senator Chris Murphy said the Taliban surge bolstered, rather than undercut, the decision to leave.

“The complete, utter failure of the Afghan National Army, absent our hand-holding, to defend their country is a blistering indictment of a failed 20-year strategy predicated on the belief that billions of US taxpayer dollars could create an effective, democratic central government in a nation that has never had one,” he said.

There’s also a growing isolationist wing of the Republican Party that backs the withdrawal.

Matt Gaetz, one of the most pro-Trump members of Congress, said he wanted all US troops and diplomats out as soon as possible regardless of the consequences.

“Maintaining an embassy in this hellscape isn’t worth it,” he tweeted.

But even if you accept the arguments for leaving Afghanistan, it’s hard to believe the US departure could not have been handled better. Was it really necessary to time the withdrawal for the peak spring fighting season? Surely more planning could have been done to provide safe harbour for Afghans who worked alongside the US and its allies.

The US withdrawal from Afghanistan may well be a surrender to reality, as its advocates insist. But a surrender it undoubtedly is.