Young people say GPs are still discouraging or blocking them from taking the AstraZeneca vaccine despite changes in the official medical advice and pleas from politicians for everyone to take whatever vaccine is available with 60 per cent of the nation back in lockdown.

Doctors are required to run patients through the rare risk of thrombosis and thrombocytopenia syndrome, or clotting disorder, associated with the AZ vaccine. The Australian Technical Advisory Group on Immunisation says the risk of TTS for under 50s is about 3.4 in every 100,000, and the fatality rate is about 3 per cent, meaning the risk of death is about one in a million. 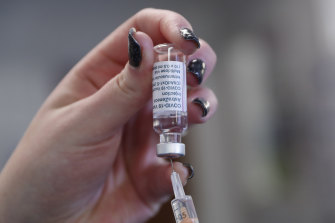 Many younger Australians are still finding it difficult to get an AstraZeneca vaccine at a GP clinic.Credit:AP

On July 24, ATAGI recommended anyone over 18 in Greater Sydney “strongly consider” getting the first available vaccine, including AZ – a message reinforced at the daily press conferences by NSW Premier Gladys Berejiklian and NSW Chief Health Officer Kerry Chant. ATAGI’s advice for people under 60 in other outbreak situations is to reassess the benefits of taking the AZ vaccine.

Matt Bransby, a 31-year-old from Liverpool in the centre of Sydney’s outbreak, went to a nearby clinic last Friday but during his consultation was encouraged to take a week to think about it. He says he was told by a doctor “if you insist, I’ll give it to you” but was warned: “What if you’re that one in a million?”

Mr Bransby welcomed the advice. “I definitely felt discouraged, but I wasn’t upset at him for doing that,” he said. “I was grateful that he was being honest for how he felt about it.”

Mr Bransby said the same doctor then contacted him on Thursday, six days later, to tell him he should consider taking the AZ vaccine. He wondered why the doctor’s “tune had changed”, but agreed to get the jab the next day.

NSW Health is now offering AZ at several walk-in clinics in Sydney’s south-west, and the Olympic Park hub will administer 5000 AZ jabs on Sunday. It is also now available at many pharmacies.

On the Gold Coast, which is also in lockdown, 30-year-old Samuel Leighton-Dore said he received an “ideological” speech from a doctor who told him there had been deaths from the vaccine but didn’t indicate how many.

“It felt like it was meant to discourage me. It just felt like an additional hurdle in an already stressful situation,” he said. “When I said I still wanted to do it, he said ‘good luck’. That was his last comment as I left the room.”

Mr Leighton-Dore said the doctor also made reference to the Queensland government’s stance on the AZ vaccine. Until last week, the state’s Chief Health Officer Jeannette Young was saying she did not want under 60s to take it, but that changed slightly on Tuesday in light of rising case numbers.

In Melbourne’s south-east, Kyla Smith, 33, said her regular GP would not give her the AZ vaccine due to her history of migraines. But after reading advice from Migraine Australia she decided she wanted to get the vaccine and looked for appointments on Hotdoc.

“I checked 10 or 12 GPs on there but I wasn’t able to get an appointment,” she said. “For some of them it was because I was a new patient and some it was because of my age.”

After posting about her problem on social media, someone linked Ms Smith to the HealthEngine website and she was able to find a clinic willing and able to vaccinate her on Friday.

“The most frustrating part is we’re being spoken to by the media and politicians regularly saying ‘get vaccinated’, but it’s really difficult to do it and sometimes you can’t do it at all,” she said.