Australian tech tycoon Zhenya Tsvetnenko’s rags-to-riches fortune came so quickly, he once told a journalist he “hadn’t had time to count it”.

The Russian-born, Perth-raised entrepreneur was at the forefront of automated SMS messaging, building the technology from his modest bedroom in the early 2000s while surviving on two-minute noodles. 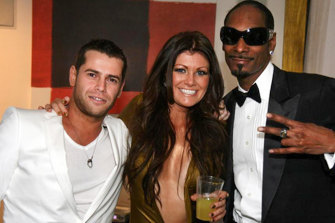 Eugeni ‘Zhenya’ Tsvetnenko and Lydia Tsvetnenko, who is not accused of any crime, party with rapper Snoop Dogg.

Tsvetnenko spent his money on seven houses across Australia and overseas, luxury cars, a $600,000 wedding and lavish parties, including an appearance at his 29th birthday by rapper Snoop Dogg.

In 2012, just three years after cracking the BRW Young Rich List, the “SMS genius” masterminded an international auto-subscribing scam, which over time stole more than US$41 million from unsuspecting Americans, and personally pocketed Tsvetnenko $15.4 million.

His lavish life was pulled from underneath him in 2018 when he was arrested following an extradition order from US authorities who uncovered “one of the biggest telecommunication scams in the country’s history”. 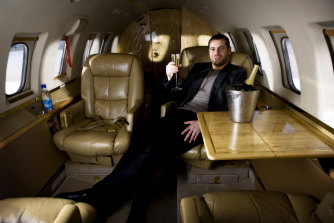 After spending three years in a Perth prison fighting his extradition, he eventually gave in and was flown to the US in late 2021. He pleaded guilty to conspiracy to commit wire fraud and money laundering in February 2022 and was sentenced to eight years’ jail on Tuesday.

Victims did not sign up or consent to the fee and most disregarded the texts as spam, not realising they were being charged until they noticed it on their phone bill.

“Tsvetnenko and his co-defendants made a fortune by fraudulently charging their customers for text messages they didn’t need to approve, in a practice called ‘auto-subscribing’, then laundering the proceeds through shell companies,” Williams said.

“[He] is paying a steep price for his mobile scam, as he has already paid back over $15 million in forfeiture, and will now spend 98 months in federal prison.” 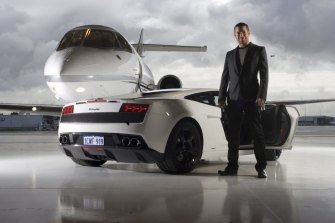 During his extradition fight, the father-of-two divorced his wife Lydia, who he met before becoming a millionaire.

Court documents revealed Lydia and his nine-year-old child, along with inmates at Hakea Prison, had provided references for the convicted fraudster in preparation for his sentencing.

In a letter to the court, Tsvetnenko also apologised for the scheme and promised to “not go wrong again”.

“I remember breaking down crying in front of Lydia, telling her that I had done something terrible and it had caught up with me. I had no one to blame but myself,” he said.

“I justified my actions at the time by thinking it wasn’t a lot of money and nobody was being hurt. I was fooling myself. I am deeply ashamed of what I did and the harm that my conduct caused.”

His co-conspirator, Darcy Wedd – originally from Western Australia – is already serving 10 years in a US prison over the scam.